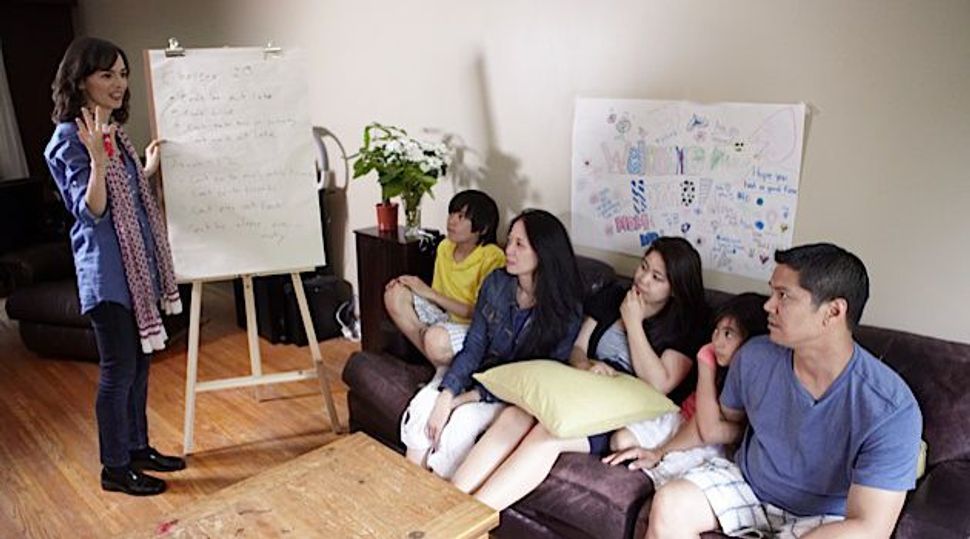 If you’re wondering if any reality TV shows are really real, I can tell you about one of them: Mine.

The show is called “World’s Worst Mom,” which refers to me, not the 13 overprotective moms I visit. I swoop in like the Supernanny, except instead of dealing with out-of-control brats, I deal with parents whose anxiety is off the charts.

One mother, for instance, allows her son to use his skateboard, but only on the lawn. Whee! Another cooks dinner, then nukes it for five more minutes to kill the germs. And another won’t drop her 9-year-old off at birthday parties, because “she could be snatched.” My job is to show — no, to prove to — these parents that their kids don’t need that kind of protection.

It’s ironic, a Jewish mom saying not to worry so much, right? The bigger irony is that I worried a ton while making this show: Was I being too mean? Pushing too hard? Embarrassing the moms?

I’m all over the Web as the mom who let her 9-year-old ride the New York City subway alone and who started the Free-Range Kids movement. But I was still surprised when Cineflix Productions, a Canadian company, called me three years ago: “Would you be interested in hosting a TV series about helicopter parents?”

Uh… who is this speaking, please?

Luckily, the producers had a plan. After I met the family, I’d take the kids aside and they’d tell me all the everyday things they’re not allowed to do — walk to school, use the stove. Over the course of four days I would have them do a bunch of these, while I basically baby-sat the parents.

The first family consisted of a divorced dad with a 6-year-old girl. He’d remarried, to a divorced mom with a 10-year-old boy. The dad and girl seemed pretty grounded. But the mom? She still sometimes spoon-fed her son. Literally. She was doing just that when the director whispered: “Okay, Lenore. Go in!” The camera trailed me as I chirped a very unnatural “Good morning!” sat myself down and proceeded to be way ruder than I would ever be in real life: “What are you doing?”

Thus was born my new TV personality. I wasn’t my usual friend-in-the-making, I was an “expert.” I shooed the kids out of the room and listened rather coldly as the mom said that she worried about letting her son use a knife, or ride a bike.

Hardly surprising, son Sammy said he felt embarrassed by all the babying. So for the first “challenge,” I made the parents leave the house and then taught Sammy how to use a knife. The next day, I taught him how to ride the bus. In between, the mom cried a lot and yelled at her husband for signing them up for the show. She yelled at me, too. But when I gave Sammy a bike on the third day, everything changed.

I invited the parents to watch this challenge. As we stood there in an empty parking lot, Sammy kept trying to balance. After 15 minutes he managed to ride a few pedals’ worth. At the end of an hour he could wobble 50 feet and was feeling pretty pumped. And his mom? We got back to the house and she burst through the door, calling to her mother: “Guess what, Mom? Sammy can ride a bike!”

Grandma’s eyes widened: “What? Our Sammy can ride a bike?”

Hugging her, the mom cried: “Yes! Our Sammy! Sammy can ride a bike!” They danced around like it was his wedding.

That’s when I realized: This is going to work. Seeing your kid do something new is what parents live for. Crawling, walking — this was just as big. Mom’s heart was filled to bursting. There was no space left for the fear.

So that was my big lesson: I can talk to people all day long (and I do) about how their kids are ready for more independence. But facts don’t change parents. Their kids do. Of the 13 families I worked with, 12 are now changed forever (can’t win ’em all!). For real.