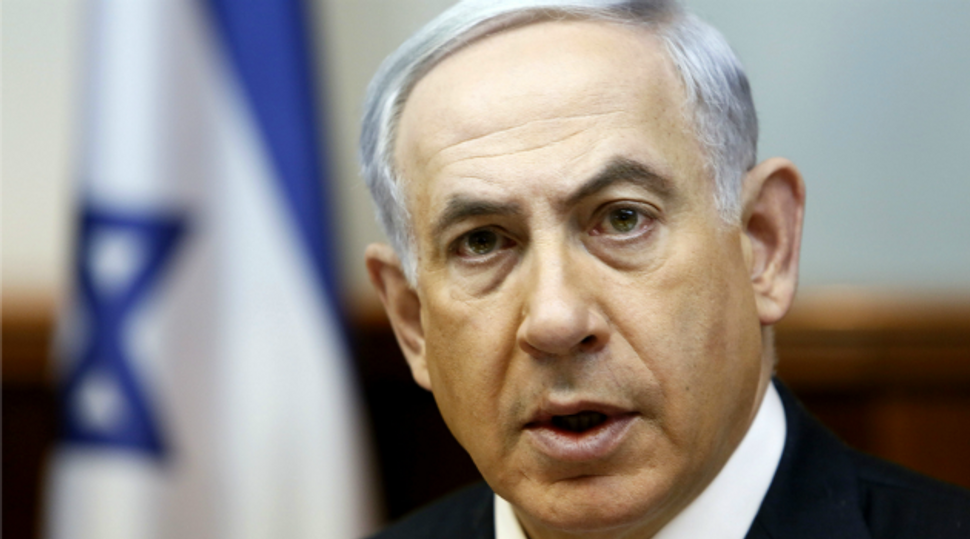 As the controversy surrounding Benjamin Netanyahu speech to Congress reaches new heights, one of the Jewish community’s top leaders is calling on the Israeli prime minister to stay home.

Abraham Foxman, national director of the Anti Defamation League said that the political uproar ignited by Netanyahu’s invitation to speak to a joint meeting of Congress makes such a move unhelpful and therefore it should be scrapped.

“It’s a tragedy of unintended consequences,” Foxman told the Forward, describing how the idea of presenting Israel’s view on Iran spiraled out of control, reaching even the Jon Stewart show, a step, Foxman said, that “turned the whole thing into a circus.”

“One needs to restart, and it needs a mature adult statement that this was not what we intended,” Foxman told the Forward. He said that going ahead as planned with the speech would be counter-productive, with all attention given to the political controversy rather than to the issue at stake. “It has been hijacked by politics,” Foxman said. “Now is a time to recalibrate, restart and find a new platform and new timing to take away the distractions.”

Foxman noted that he does not dispute the seriousness of the Iranian nuclear issue and that he agrees with Netanyahu on the need to strengthen sanctions against Tehran, but he argued that recent events have derailed the initial intention of Netanyahu’s address to Congress.

Among the potential alternatives mentioned by Foxman for Netanyahu’s congressional speech were coming to Washington only for the AIPAC conference, postponing his address until after the March 17 elections in Israel, or expressing his concerns over the emerging Iran deal in direct conversations.

Earlier on Friday, the White House announced Vice President Joe Biden will not attend the speech, because he will be travelling out of the country. The statement did not specify Biden’s destination.

Even before Foxman’s dramatic staetment, Netanyahu and his allies appeared to be looking for excuses about how the speech turned into a political disaster.

The strategy he settled on appears to be to shift the blame to Republican House Speaker John Boehner.

According to this explanation, Netanyahu, through his ambassador to Washington Ron Dermer, had understood that Boehner would make sure that Democrats were on board with the idea of inviting the Israeli leader to address a joint meeting of Congress on the problem of Iran’s nuclear development activities. Maybe not all Democratic leadership, but at least enough to allow all sides to say with a straight face that it was a bipartisan invitation.

Furthermore, Netanyahu and Dermer did not know — at least according to people who have been in touch with Israeli officials dealing with the mess created by the invitation — that Boehner would announce the visit the morning after President Obama delivered his State of the Union speech. The timing appeared designed to rebut the president’s stand on Iran, thus infuriating the president and his fellow Democrats.

These claims came out in the open on Friday, when Netyanyahu confidante Tzachi Hanegbi, Israel’s deputy foreign minister and a member of the Likud’s top leadership circle, stated in a radio interview that Boehner had left Netanyahu in the dark as he moved ahead with the invitation.

“It appears that the speaker of Congress made a move, in which we trusted, but which it ultimately became clear was a one sided move and not a move by both sides,” Hanegbi said in the interview.

Speaking out in this manner against Boehner could be viewed as a calculated move that could provide the prime minister with a way out of the March 3 speech. Netanyahu, so it would seem, could use this alleged misunderstanding with Boehner as an excuse to cancel the visit.

But all signs indicate this is not the case — at least not yet.

Netanyahu and Dermer have given no indication that retreat is an option, and blaming Boehner for the partisan flare-up is seen mainly as a way of appeasing Democrats and deflecting some of the criticism, not as a way out. One Democratic staffer briefed on talks with Dermer noted that even though the Israeli ambassador reached out to lawmakers and sought to explain the situation, he never offered an apology nor did he express regret over the way Netanyahu’s invitation was handled.

By now it is clear that Netanyahu and Dermer’s efforts to assuage Democrats’ anger have not gone well, despite endless hours spent by the ambassador on Capitol Hill and a series of phone calls by Netanyahu to leading lawmakers. Democrats are still furious at the Israeli prime minister and some are considering an unofficial boycott of his speech.

And to make things worse, here is Hanegbi again, who in what can only be viewed as a moment of unintended candor, openly confirmed in his radio interview what many critics have been claiming all along: that Netanyahu’s visit is an attempt to influence the American legislative process by convincing members to support an Iran sanctions bill opposed by President Obama.

“The Republicans know, as the president has already made clear, that he will veto this legislation,” Hanegbi said. “So in order to pass legislation that overcomes the veto, two-thirds are required in the Senate. So if the prime minister can persuade another one or two or another three or four, this could have weight.”