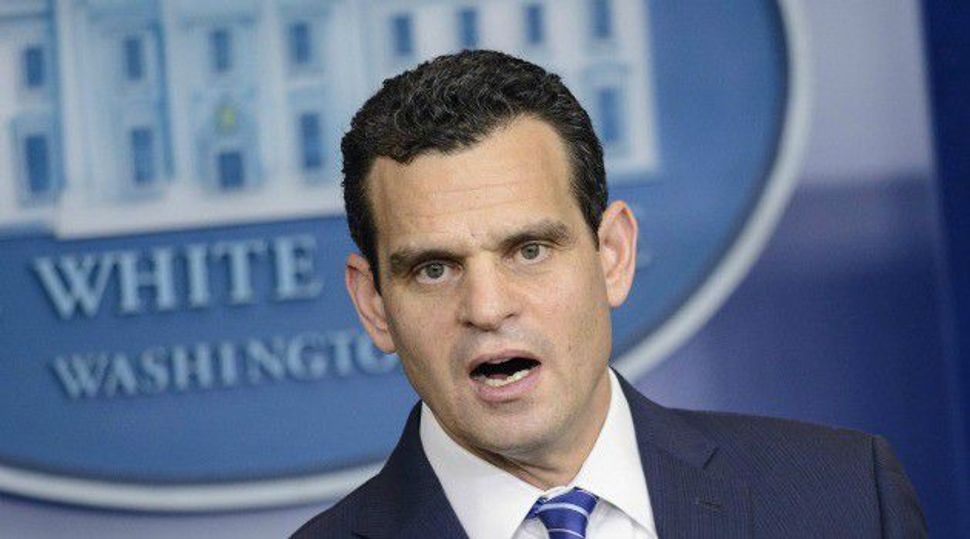 In a reflection of the increasing role the U.S. Department of the Treasury is playing in clandestine operations, America’s “sanctions guru” was sworn in on February 9 as the country’s second-in-command spymaster.

David Cohen, whose appointment as deputy director of the CIA was announced in January, will be the highest-ranking Jew now in the spy agency’s hierarchy — but not the first to reach its upper heights. In 1995, President Clinton appointed John Deutch, a scientist and Energy Department official, to head the agency. Deutch served in this position less than two years.

As undersecretary of the Treasury for terrorism and financial intelligence, the position Cohen held until his CIA appointment, Cohen stood at the forefront of the battle to dry up the financial resources of ISIS. Experts see his new job as a mark of the importance that financial tracking has assumed in America’s national security infrastructure.

“It reinforces the idea that Treasury, which has become a more intimate part of the intelligence, is conversant and relevant in all issues, from Iran and North Korea to Al Qaeda and ISIS,” said Juan Zarate, a Treasury and White House official during the second Bush administration who had focused on financial intelligence.

Colleagues in the Obama administration referred to Cohen as the “financial Batman,” who, armed with balance sheets and transaction ledgers, was out to get the bad guys. This description may overstate the excitement involved in closing financial taps that allowed rogue players on the international scene to thrive, but it also catches the important role played by Cohen and his team in modern intelligence warfare.

The idea of setting up an office within the Treasury Department to deal with counterterrorism was conceived shortly after the September 11 terror attacks. The operation has since grown into a massive division, with 700 employees charged with tracking terror financing and enforcing sanctions.

Cohen served as head of the office since 2011, and in the past year he has focused much of its work on battling the growing threat of ISIS. The role played by Cohen on this front is viewed as complementary to that of the troops fighting the war on the ground in Iraq and Syria. Cohen and his office have been tracking down the Islamic State’s financial resources, which include significant oil revenues as well as millions of dollars paid as ransom from countries seeking to free hostages held by the terrorists. The effort led by the Treasury is aimed at cracking down on the group’s oil sales and shutting down its means of conducting business. Cohen has also worked tirelessly with Turkey and Gulf countries to make sure ISIS does not find outlets for its oil exports.

Before ISIS emerged on the world scene, Cohen was known primarily as the top administration official in charge of tightening the screws on Iran, a move that led, according to many statements by the administration, to Iran eventually agreeing to engage in diplomatic negotiations over the future of its nuclear program. The international community believes that Iran is developing its program to attain nuclear weapons, though Iran states it is only for energy production and research.

The foundations for American and international sanctions against Iran were laid before Cohen took over as undersecretary of the Treasury, but during his tenure these steps reached their peak. They involved a coordinated global effort that effectively paralyzed much of Iran’s economy, leading to a plunge in its oil sales and to a nosedive of the local currency.

In the past year, Cohen found himself managing an opposite trend. Iran agreed to freeze part of its nuclear activity in November 2013 as part of an interim pact with America and five other countries. In return, the United States, with the backing of its negotiating partners, released several billion dollars in long-frozen assets belonging to Iran.

“He had to walk a tightrope,” said Jonathan Schanzer, vice president of research at the Foundation for Defense of Democracies and a former Treasury official. “At a time when the administration was going to negotiations with Iran, he had to keep the sanctions intact.”

On another front, Cohen also faced a need to ease measures rather than tightening them in Cuba, as the Obama administration embarked on a move to normalize ties with that country, lifting many of the American sanctions imposed on the communist island decades ago.

Cohen, 51, a Yale Law School graduate who grew up in a Boston Jewish family, first began his work in government when Bill Clinton was president. He stayed on to work for the George W. Bush administration as a senior counsel in the Treasury Department. Among other things, he was in charge of drafting part of the USA Patriot Act, a controversial law that expanded the government’s authority to reach into citizens’ records in order to combat terror threats. Cohen went into private practice before rejoining the Treasury Department’s counter-terrorism office in 2009. Two years later he was confirmed by the Senate as undersecretary.

“It is my dream job,” Cohen said in an October 2014 interview with The New York Times. “I’m able to touch pretty much every single national security issue we’re facing.” He declined to make himself available for an interview with the Forward. The position of deputy director of the CIA does not require Senate confirmation.

Cohen succeeded another Jewish official, Stuart Levey, who was the first undersecretary in charge of terrorism and financial intelligence. Levey built much of the operation and was instrumental in orchestrating sanctions against Iran and North Korea, both nations aiming to acquire military nuclear capabilities.

Cohen comes to the CIA’s no. 2 spot with little knowledge of the CIA’s field operations and no experience in this type of work. “He will face some challenges with the field people,” Zarate said. “David doesn’t come from within the CIA, so he may have some cultural adjustments to make, but I have no doubt he will overcome these growing pains.”

In the past, the intelligence agency has been considered a less than welcoming place for minorities in general and for Jews specifically. In 1997, the CIA booted a young Jewish employee, Adam Ciralsky, citing his “Jewish roots” and his earlier visits to Israel as a source of concern, questioning his loyalty to America. Ciralsky sued for discrimination and eventually dropped the lawsuit, but the agency acknowledged its prejudice and worked with the Anti-Defamation League to train its employees against religious, ethnic and racial bias.

Another official who rose to high positions in the agency was also named David Cohen. He spent 35 years at the CIA, reaching the position of director of operations — the spying as opposed to the analysis side of its mandate. Cohen left the agency to become the New York City Police Department’s first deputy commissioner of intelligence.