Deep in Dixie, Synagogue Stands Up for Gay Marriage — and Couples Flock To Say ‘I Do’ 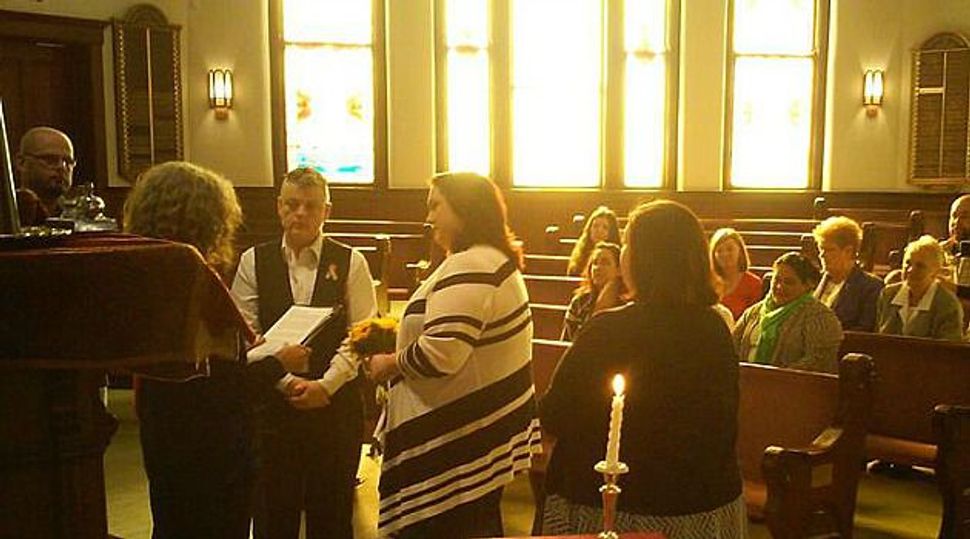 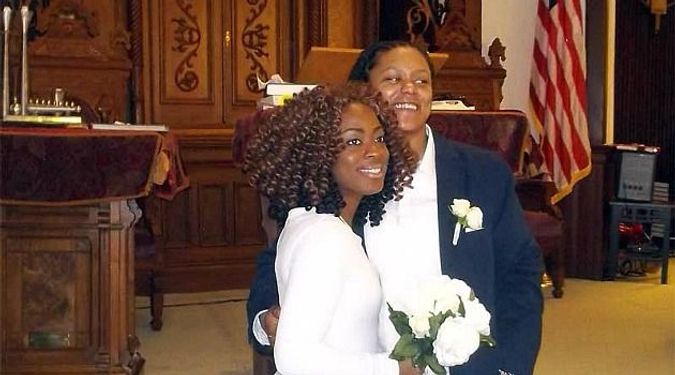 What happens when you marry frigid weather, a deep-in-the-heart-of-Dixie battle over same-sex nuptials and a synagogue determined to take a stand for equality?

Welcome to “Wedding Week” in Huntsville, Alabama, where the city’s only Reform congregation stepped up to host the celebration of all things matrimonial after the state’s top judge resisted a federal court order to allow gay marriage to go ahead — and plunging temperatures made outdoor plans impractical. 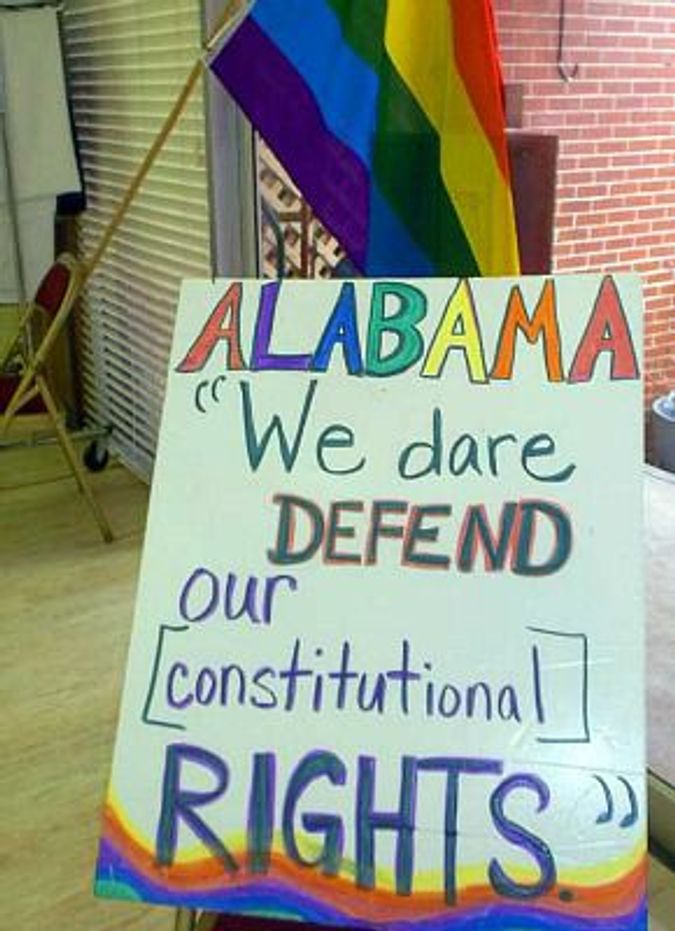 “Hell didn’t freeze over, but Alabama did,” quipped Rev. Lynne Abbott, a Universal Life Church minister and one of the event’s organizers. “We were so grateful to Temple B’nai Sholom for allowing us to use their sacred space.”

Dozens of couples — gay and straight, from many shades of faith — flocked to B’nai Sholom Thursday and Friday to say their vows in the Jewish sanctuary, which sits downtown in the Bible Belt town, not far from a park where organizers had planned to hold the festival.

Chris Ward and Joe Harden traveled 100 miles to Huntsville from Chattanooga, Tennesseeto to get married legally.

“The South gets a bad name, but this day shows that many of the stereotypes are misleading,” Harden said after tying the knot with his partner of four years. “People who love each other are making families, and even strangers stand up to clap for them.” 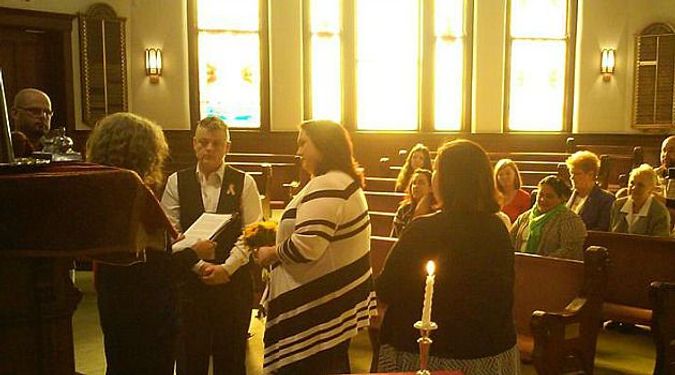 The Supreme Court declined to order a stay on the lower court ruling, which many same-sex couples thought signaled the end to the ban. But Alabama Chief Justice Roy Moore stepped in and ordered clerks not to comply with the federal order, leaving many in the dark about what they should do.

Most clerks simply refused to issue marriage licenses to anyone, gay or straight, while others shut their doors altogether.

A diverse coalition of advocates stepped in by sponsoring Wedding Week, which was designed to allow couples to wed. Although the week is primarily aimed at same-sex couples, who are still barred from marrying in all the states that border Alabama except Florida, organizers welcomed straight couples, too, who were locked out of the courthouse doors by the legal fight. 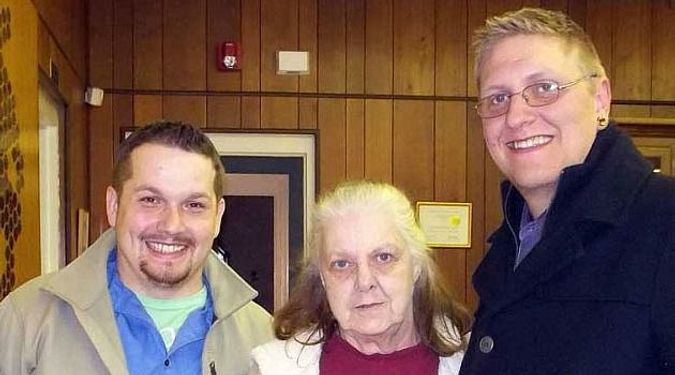 Mother’s Blessing: Chris Ward and Joe Harden drove 100 miles from Tennessee to tie the knot — and Ward’s mother celebrated with them. Image by larisa thomason

Wedding Week organizers were scrambling to find an indoor venue after an Arctic cold wave made it impossible to hold nuptials outdoors after Wednesday.

Two B’nai Sholom members heard about the problem and suggested using the synagogue, which is just two blocks from the Madison County courthouse where couples had flocked to jump the broom.

“This was the perfect alternative, and I didn’t hesitate to say yes,” Bahar said.

The synagogue’s leadership was just as supportive: President Sherman Banks hesitated to comment for fear of bragging about the congregation’s desire to help. But he did offer this succinct explanation: “We’ve got no choice; it’s who we are.” 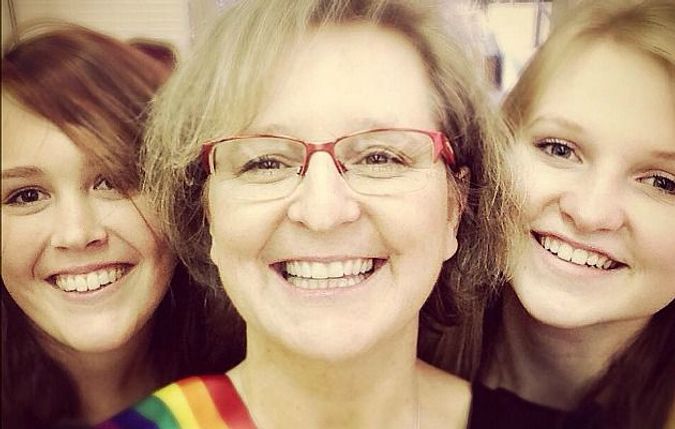 All Smiles: Mitzi Connell beams with her daughter and a friend after officiating at a wedding in Huntsville, Alabama. Image by mitzi connell

The interfaith outreach is nothing remarkable for B’nai Sholom. Bahar explained that a local Christian church has offered space for the community Seder in April because the synagogue’s facilities aren’t large enough to accommodate the crowd.

“One good mitzvah leads to another,” she said with a broad smile.

Jessica and William Rowe shared a piece of wedding cake after saying their vows in the synagogue on Thursday, February 12.

One straight groom sounded a plaintive note about winding up at B’nai Sholom with his wife-to-be after being surprised at getting turned away from the courthouse.

“What were we supposed to do?” he asked. “You can’t just knock on the door of a church and ask the preacher to do a wedding.”

Crystal Miller looked stunning in an all-white outfit as she said “I do’s” with her wife, Toni, while friends and family looked on Thursday afternoon 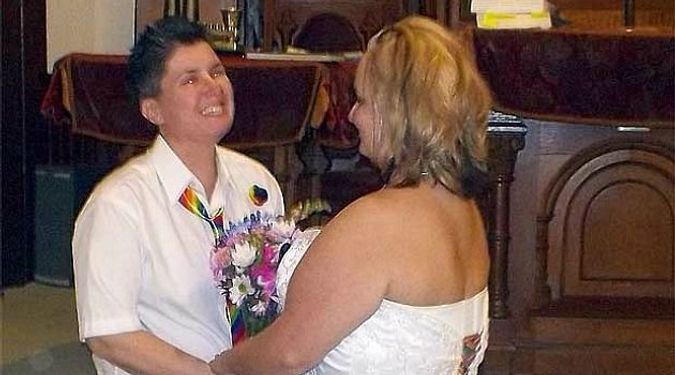 Over the Moon: Heather and Amy Thomas can’t hide excitement at wedding. Image by larisa thomason

Leading the service was the Rev. Van David Nolf, who explained that he was “always nervous, even after 41 years of weddings.” Nolf was born Jewish. He spent some time in the Church of the Nazarene, and then “turned Unitarian.”

The Nazarene Church didn’t work for him, because he couldn’t understand “why my wife couldn’t wear pants and had to ask my permission to speak.” She moved to California and became a folk singer, and he moved to the Unitarians.

In all, 65 couples got married at the temple, along with 87 who celebrated their unions outdoors on Monday, Tuesday and Wednesday. Although Moore hadn’t softened his stand, by the end of the week more than half the counties in Alabama were issuing marriage licenses to same-sex couples.

The only disappointment for Bahar was that no Jewish couples turned out to get married. (This reporter volunteered to renew vows with her husband of 23 years, but the parade of real nuptials made it impractical). 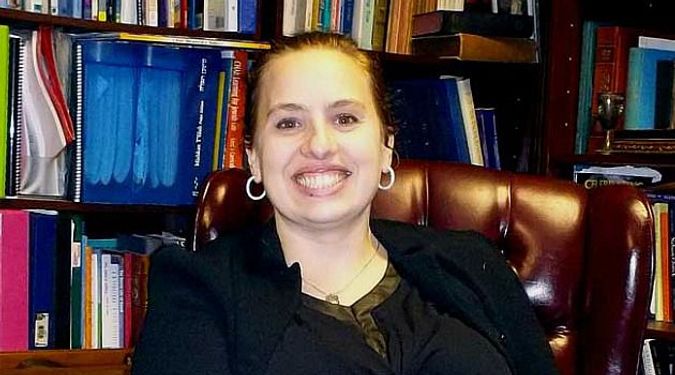 Meant To Be: Rabbi Elizabeth Bahar said the shul was overjoyed to offer a sanctuary to couples wishing to wed — gay and straight. Image by larisa thomason

After doing six wedding ceremonies in rapid-fire succession, Abbott was exhausted but exhilarated.

What was the most common reaction from same-sex couples?

“I never thought I’d be getting married at all,” she related, “let alone in a Jewish temple.”

Larisa Thomason, a seventh-generation north Alabama resident, is a writer and member of Temple B’nai Sholom. Contact her at larisa_thomason@yahoo.com. 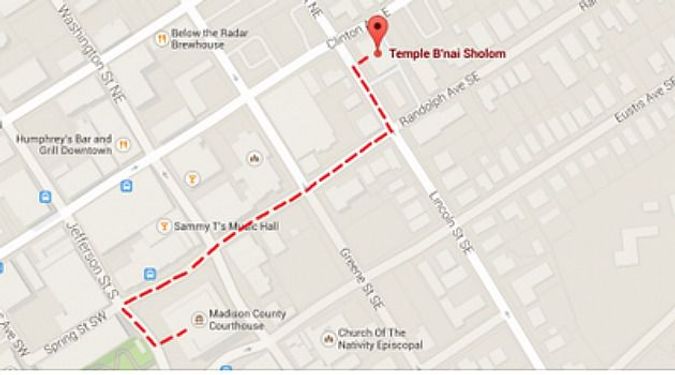 Where’s the Altar? Activists posted a map to help couples find the temple where they would get married.

Deep in Dixie, Synagogue Stands Up for Gay Marriage — and Couples Flock To Say ‘I Do’