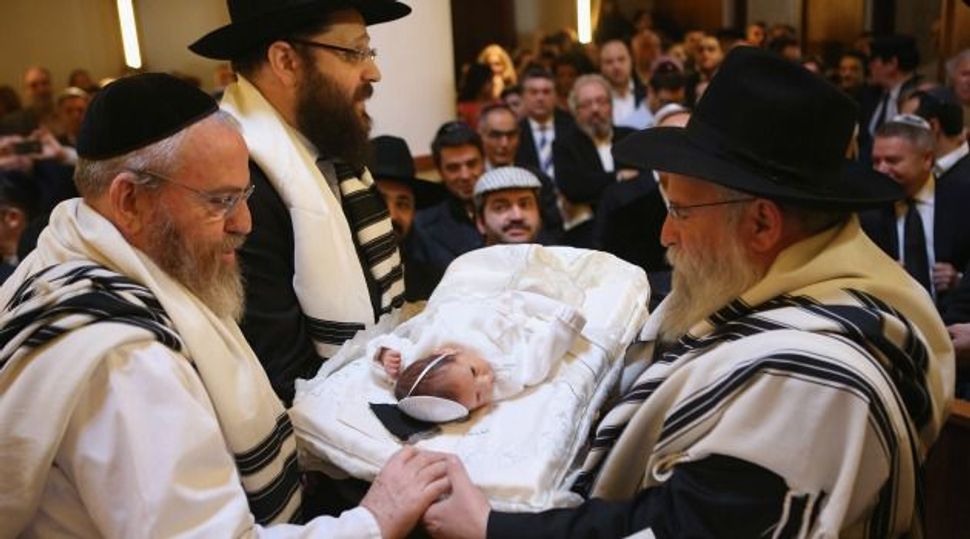 Ultra-Orthodox leaders, who represent a powerful voting bloc in the city, welcomed the announcement, hailing it as a victory for religious freedom.

But it remains to be seen whether the compromise hammered out with those leaders will stop Jewish babies from being infected with herpes.

Ultra-Orthodox leaders have spent more than two years fighting the city, in back rooms and in the courts, over a law that requires mohels to get written consent from parents before performing metzitzah b’peh.

The MBP ritual, which is practiced mostly by ultra-Orthodox sects, involves the mohel using his mouth to suction blood from the circumcision wound.

Since 2000, the city’s health department believes that 17 babies have been infected with herpes as a result of MBP. Two of those babies suffered brain damage and two babies died.

In most of the recent neonatal herpes cases, ultra-Orthodox parents, in compliance with the stand of their rabbinic leaders, have refused to inform the health department of the identity of the mohels who circumcised their children.

Administration officials, speaking on a conference call to the media, said that in place of the consent form regulation they have secured cooperation with the ultra-Orthodox community.

But the identities of mohels who have transmitted herpes will probably not be made available to Jewish parents.

The administration officials, who spoke on condition of anonymity, said it was unlikely that the city would release the name of a mohel who was banned after testing positive for infecting an infant with herpes.

They also could not say what the policy would be in cases where a mohel tests positive for herpes — prevalent in more than 70% of the population — but not for the strain that infected the baby.

Officials were also unsure whether the board of health would even grant the city’s request to rescind the consent form regulation.

It’s “free people voting freely,” one official said of the health board, which will likely vote on the city’s proposal in June. “I have no prediction.”

The health board may well take some convincing. When the regulation was adopted in September 2012, several board members thought the consent form was too weak.

According to the minutes of that meeting, one board member, Dr. Joel Forman, told his colleagues: “I would argue strongly for something a little stronger.”

The minutes, part of a cache of documents obtained by the Forward under a Freedom of Information Law request, chart public health officials’ increasing frustration as the regulation’s ineffectiveness became clear.

In April 2014, Bruce Vladeck, a health board member, told the health department’s general counsel, Tom Merrill, in an email: “I’m not unmindful of the politics, but the way in which these folks are flouting our rules is a disgrace and an embarrassment… I think the Board of Health is entitled to know what enforcement actions the Department is planning. I would support anything real.”

From the outset, the city never planned much in the way of enforcing the regulation.

The consent form warned parents that MBP exposes infants to the risk of herpes “which may result in brain damage or death.”

Mohels were instructed to keep signed copies of the forms for one year. But the health department never conducted spot checks to see if mohels were complying. Instead, they only asked for copies of the forms if a parent complained, or if there was an investigation into a suspected case of MBP-related herpes.

In the two years since the regulation was brought into force and despite five confirmed cases of neonatal herpes following MBP rituals during that time, the city identified just two of the mohels responsible, only one of whom had a consent form. The two mohels who were identified were banned from performing MBP. But the city will not release their names so parents have no way of knowing which mohels to avoid.

As a mayoral candidate, de Blasio criticized the consent form regulation. On assuming office in January 2014, he vowed to find an alternative to the form that would balance public health with the ultra-Orthodox community’s religious beliefs.

Under the new agreement, health care providers in the ultra-Orthodox community will distribute information about the risks of MBP, administration officials said.

In opting for DNA tests, de Blasio is piggybacking on a program launched two years ago in Rockland County, New York.

There, the county’s director of epidemiology and public health planning persuaded mohels to submit to DNA tests following confirmed cases of neonatal herpes after MBP. Of the three cases so far, one test was inconclusive and the remaining two tests showed that the mohels involved were not the source of infection.

The ultra-Orthodox community views the Rockland results as confirmation of their long-standing belief that MBP does not spread herpes infection or that, if it does, the risk is statistically insignificant.

The administration’s announcement was broadly welcomed by ultra-Orthodox leaders who sued the city in 2012, after the health department introduced the consent form regulation.

A leader of one of the litigants, Rabbi David Zwiebel, executive vice president of the ultra-Orthodox umbrella group Agudath Israel of America, told the Forward: “It is to Mayor de Blasio’s eternal credit that he recognized how profoundly offensive the regulation was to our community and worked with us to undo the terrible precedent his predecessor [Mayor Michael Bloomberg] had established.”

Administration officials said that in view of the compromise agreement the city hopes to be able to settle the pending federal case.

The 17 Jewish infants that the city says were infected following MBP all had HSV-1, a type of herpes most commonly found in the mouth. The city cites further evidence as proof of a link between MBP and neonatal herpes infection, such as the location of herpes lesions on or around the infants’ genitals and the onset of the disease shortly after circumcision.

The health department has said countless times in the past that its own epidemiological studies, as well as similar studies in Canada and Israel, prove a link between MBP and neonatal herpes. Leading medical associations, including the Centers for Disease Control and the Infectious Diseases Society of America, support the city’s position.

Asked on the conference call why the city does not ban the practice, an administration official said a ban would force it underground. “They will not stop practicing [MBP] no matter what we say,” the official said.