Can Israeli American Council Grow Without Kow-Towing to Big Donors Like Sheldon Adelson? 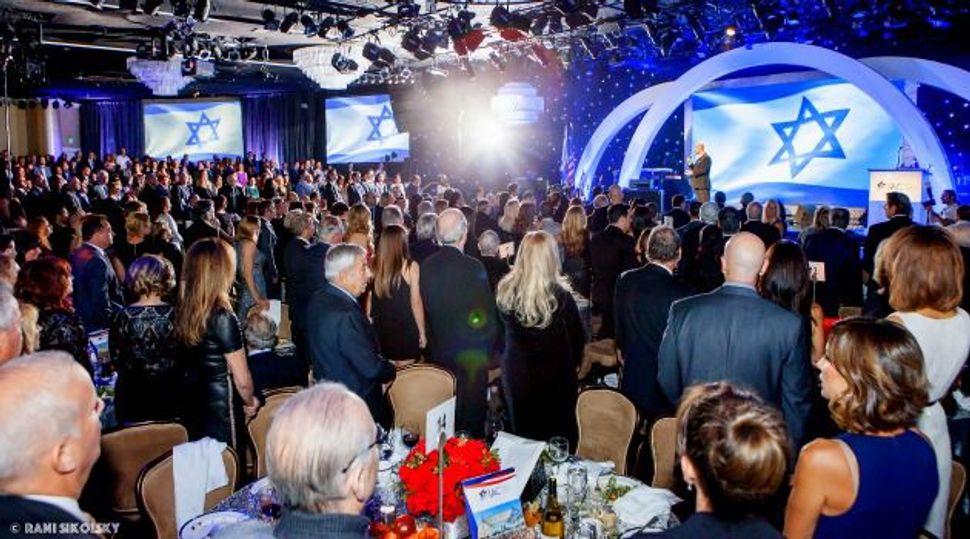 A Night To Remember: The IAC’s gala at the Beverly Hills Hilton raised over $23 million. Image by Rani Sikolski

It was a gala reminiscent of the good old days of Jewish organizational philanthropy.

When leaders of the Israeli American Council described the new community center they intend to build for Israeli expats in the San Fernando Valley, and the $10 million price tag that comes with it, hands were raised from the audience that gathered in Los Angeles on March 9 at the Beverly Hills Hilton. A $3.6 million pledge was announced, then came a matching pledge of another $3.6, and within minutes the entire project was covered. But the fundraising fête was not done until the group’s key backers, Sheldon Adelson and his Israeli-born wife, Miriam Adelson, added their own pledge: $12 million — an increase from their $10 million gift to the IAC last year.

Jewish organizations, most of them older and more established than the IAC, can only envy such a fundraising night, which ended with $23.5 million in the coffers of an 8-year-old organization set up to serve as a communal voice for Israelis living in America.

Backed with cash flowing in faster than it can be used, The IAC has been growing by leaps and bounds. Alongside the first-ever Israeli-American community center being built in Los Angeles, an Israeli House is scheduled to be inaugurated in Boston on March 30, and a Washington branch is in the final stages of launching, making it the group’s seventh branch nationwide.

The funding, the IAC says proudly, comes entirely from Israeli expats. The outpouring, IAC officials say, defies the common belief that Israelis have excluded themselves from the American Jewish philanthropic world.

“This attempt to create an Israeli-American communal structure is worth noting, and shows that at least some Israelis are starting to internalize the American-Jewish model of voluntary, self-funded, communities,” Yehudah Mirsky of Brandeis University said. But he cautioned, “It will be regrettable if the IAC turns out to have a partisan political orientation, and I think we do already see signs of that.”

The Adelsons’ political donations have made Sheldon Adelson in particular a major player on the right in American and Israeli politics. But Sagi Balasha, the group’s CEO, rejected any claim that funding from the Adelsons has come with any strings attached. “He is a very political person,” Balasha said of Adelson, “but our organization has always been apolitical. There is no pressure on us to identify politically with either side. We represent the Israeli-American community, which has a variety of opinions.”

Balasha moved to Los Angeles from Israel four years ago and took over the helm of the organization just as the IAC began evolving, going from a local organization focused on providing services to the 200,000 Israelis living in the area to a major group with deep-pocket funders and national aspirations.

The IAC now has 65 employees working at local chapters and its national headquarters, a dramatic increase in comparison with the mere seven staff members it had just two years ago. Revenues have been on a steady rise. From annual fundraising of less than $500,000 in 2010, the group, which in 2013 changed its name, Israeli Leadership Club, to Israeli American Council, began to multiply its income, reaching more than $2.6 million in 2011 and $4.5 million in 2012. The group’s main backer at the time was Israeli-American Haim Saban, a Hollywood cartoon mogul who has made his mark in national politics as a top donor to Bill and Hillary Rodham Clinton. Saban still supports the IAC, but Adelson has dwarfed his support. When the Las Vegas billionaire began to show interest in the group, revenue numbers skyrocketed, bringing the current year’s budget to $17.5, with much more expected next year, when new pledges from the recent gala take effect.

The Adelsons are now responsible for most of the IAC’s funding, but the group insists it is not a single-donor operation. “Our goal is to have their proportion decline,” Balasha said of Adelson’s donations. The IAC currently has seven top donors that give more than $100,000, and more than 200 members that have given gifts of more than $5,000.

Tapping into this previously untouched reservoir of Israeli-Americans could mark an important breakthrough in American Jewish philanthropy. The only other notable to harness the fortunes of Israeli immigrants to America was conducted by Rabbi Yoshiyahu Pinto, who based much of his operation, both in New York and in Israel, on contributions from Israeli real estate businessmen who had settled in the United States. Friends of IDF, an American-based organization set up to provide for the welfare needs of Israeli soldiers, has also succeeded in bringing many Israeli-American donors on board. Still, for most Jewish organizations, expats from Israel, even those financially established, remain outside the realm of Jewish philanthropy. Some view it as a result of Israel’s different philanthropic culture, while others believe it demonstrates the fact that Israeli émigrés do not readily integrate into American Jewish institutional life.

Founded in 2007, the IAC now views its mission as not only supporting Israeli-Americans struggling to fit in while maintaining their communal characteristics and their Hebrew language, but also as a force within the American Jewish community. Its goal, ultimately, is to marshal the collective influence of an Israeli-American population estimated at anywhere from 500,000 to 800,000 toward pro-Israel activism.

Key to this goal is the group’s initial foray into the world of advocacy, on a national and a local level. the IAC has recently set up a Washington branch, which is now in the process of recruiting a director and staff members and has made its presence known in several policy forums this past year. The group held its inaugural Washington conference last November, with 750 participants and an impressive roster of speakers, and is preparing to double that attendance this year. It also waded into the controversy over Israeli Prime Minister Benjamin Netanyahu’s recent speech in Congress just two weeks before an Israeli election by publicly calling on lawmakers not to skip the speech.

This statement, alongside the outspoken views of its benefactor, Adelson, has given the IAC a political tinge in the eyes of some observers. Balasha insisted the letter to lawmakers urging them to attend was not a partisan move and that the IAC would support the right of any Israeli leader, regardless of party, to speak to Congress. He also made clear that the group’s new advocacy initiative will not compete with existing pro-Israel lobbying efforts, such as the American Israel Public Affairs Committee — a group Adelson split from several years ago in anger over its decision to formally back a two-state solution to the Israel-Palestinian conflict.

But Balasha vowed that the IAC would be focusing on other issues, such as strengthening local government ties with Israel, or fighting against boycotts of Israeli goods in American ports. “Lobbying is not in the center of our mission statement and will never be our focal point,” he said.

Nevertheless, some of the IAC’s latest actions illustrate how in practice it leans toward the center-right wing of the organized Jewish community. At its gala, the group honored Roz and Jerry Rothstein, co-founders of StandWithUs, an education and advocacy group that argues that the Israeli-occupied Palestinian territories are not, in fact, occupied and that the exclusively Jewish Israeli settlements in the West Bank are legal, though no country other than Israel holds this position.

Recently, the IAC hosted several receptions during the annual conference of AIPAC, the Washington-based Israel lobby. Asked whether the group would consider holding similar events during the upcoming conference of J Street, AIPAC’s competitor from the left, Balasha ruled the dovish lobby out of bounds. “We’re not fully convinced that they are pro-Israel,” he said of J Street. “My impression is that their direction could harm the State of Israel.”

Alan Elsner, J Street’s vice president of communications, in response urged IAC leaders and activists to take part in the conference, where “they will also be able to feel firsthand the tremendous love our delegates feel for Israel and their sincere and fervent desire to see Israel tackle its most pressing challenges.”

Beyond setting up new chapters and taking on advocacy work, the group is also expanding in other directions. After launching its first Taglit-Birthright Israel trip for young Israeli-Americans, the group is now setting up two Hebrew-language sleep-away youth camps in the United States and new groups for Israelis on campus. The IAC also plans to launch an online social media platform for Israelis living in America, and a hotline for Israelis in need.

The only taboo for this rapidly growing organization is taking any step that could be viewed as encouraging other Israelis to follow its own members and immigrate to America. The online platform will not, for example, include job listings or advice on immigration. “We will not help Israelis who want to leave Israel,” Balasha said.

Can Israeli American Council Grow Without Kow-Towing to Big Donors Like Sheldon Adelson?