Can Jewish Transgender Teen’s Successful Coming Out Provide Model for Others? 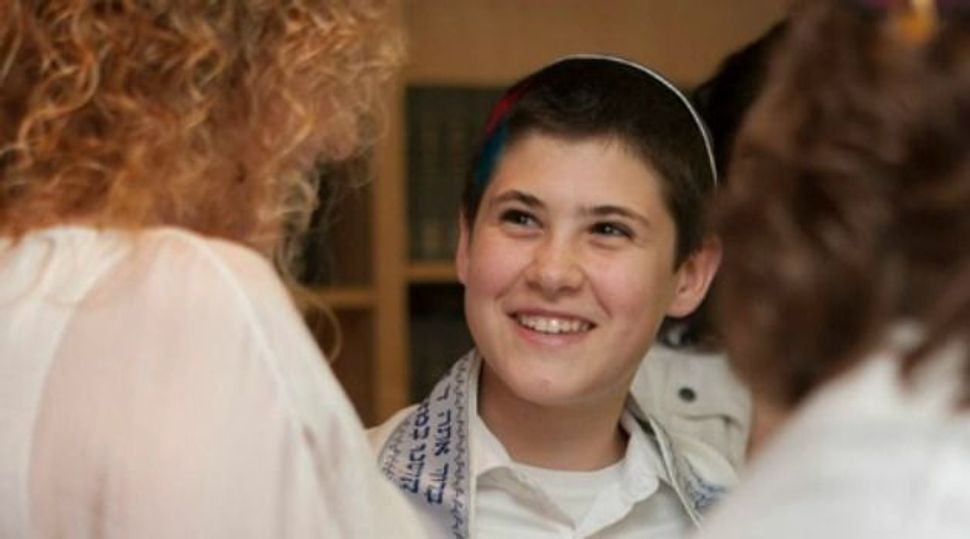 Tom Chai Sosnik stood in front of his eighth-grade class, flecks of rainbow colored hair visible beneath his blue yarmulke, as he was wrapped in a tallit for the very first time. His classmates stood and chanted together, “Baruch HaBah [“Welcome”]” three times, and then ran forward, enveloping him in a big, messy hug. Tom’s transition was complete, but unlike what you may have expected, it was not one from boy to man, but rather from girl to boy.

You may recognize the name Tom Sosnik — the transgender teenager whose “coming out” speech went viral after being posted on Facebook by his family on March 16. Since then, it has been viewed more than 61,000 times and has been reposted by such national media sites as The Huffington Post, Cosmopolitan magazine and Out magazine. Tom is being hailed as a “hero” in the transgender community, praised for his articulateness and his sincere sense of self.

“I am no longer Mia, I never really was,” he says in the video, as he stands in the beit midrash, Hebrew for “house of study,” at Tehiyah Day School, in El Cerrito, California. “Now I finally stand before you in my true and authentic gender identity as Tom. If you support me, I’ll feel like the luckiest boy in the world.”

What the video doesn’t show is what followed the speech: a special naming ceremony, designed by the school’s rabbi, Tsipi Gabai, which she described as a “cross between a bar mitzvah and a brit,” or circumcision ceremony,

“In Judaism, rituals are there to mark important transitions,” Gabai said about the service. “I wanted it to not only be a celebration, but helpful in marking a point for Tom and for his friends.”

During the naming ceremony, Gabai recited the she’asani b’tzalmo, a blessing in which the worshipper thanks God for having made the worshipper in God’s own image. It was, said Gabai, “a way of acknowledging the covenant between Tom and his God, and his community, and the people of Israel.” 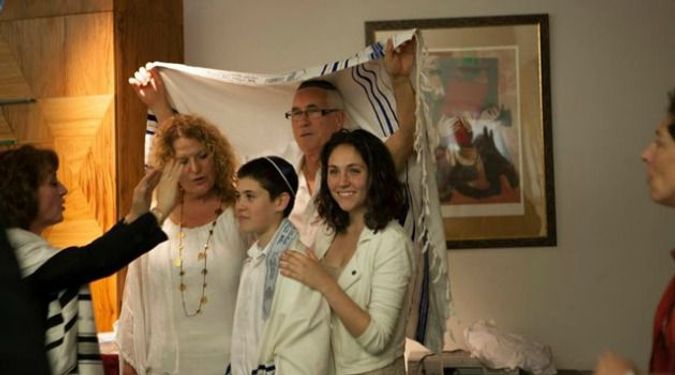 Tom is joined by (below, from left to right) his mother Esti Sosnik, his father Udi Sosnik and his sister Gili Sosnik. Image by misha bruk

Before coming out to his family this past July as transgender, Tom struggled deeply with his identity.

“The challenge wasn’t accepting him as trans, it was when he didn’t know what was going on and he felt different and he felt wrong and confused,” said his elder sister, Gili Sosnik, who is currently a student at Mills College. “We shared a bathroom and would spend a lot of time in there together, and in those moments a lot of his confusion and vulnerability came out, because he had to really face his own body and he felt so weird about it.”

In sixth grade, Tom decided to cut his hair — modeled after a girl he saw with a mohawk, while on a family trip in Oakland, California. The experience changed his life. He wrote about it in an application essay to Bentley High School, saying that “to an 11-year-old misfit, it was a beacon of hope. I started to understand all the things I hated about myself and it wasn’t just my hair. It all seemed so simple now. I hated being a girl.”

The short hair made Tom more comfortable with his appearance. But it also provoked a slew of teasing and bullying.

“He would come home each day with tears in his eyes,” his mother, Esti Sosnik, recalled about his experience at Manchester G.A.T.E. the middle school he attended in Fresno, California, where the family lived at the time. “It was clear to us we needed to be in a more liberal place.”

It was not yet clear to the family that Tom was transgender. But after speaking with a gender specialist, they researched schools in the Bay area and settled on Tehiyah Day School — a pluralistic Jewish elementary day school in El Cerrito with 259 students that was founded in 1979. The family moved from their home of 19 years to be near the school so that Tom would have a community that accepted him.

In July 2014, after a year at Tehiyah that Tom describes as akin to “a warm hug,” he came out to his family as transgender. The Sosniks worked together to create a new name to replace Mia, his female birth name. They debated between Mio, Noam and Alejandro, and finally settled on Tom, because of its Hebrew meaning.

“Tom is ‘completion,’ ‘fullness,’ ‘purity,’” his mother explained. There was slight concern that the kabbalistic meaning of “Tom” had a layer of bad luck, and so they added “Chai” as his middle name — “life.”

Initially they decided to keep his gender transition private until after he graduated middle school. But then, in December, a 17-year old-girl named Leelah Alcorn committed suicide by walking in front of a tractor trailer on a highway in Warren, Ohio, because her parents and friends refused to accept her transgender identity. In the suicide note that she posted on Tumblr, she stated, “I told my mom, and she told me that God doesn’t make mistakes, that I am wrong… I’ve had enough. The only way I will rest in peace is if one day transgender people aren’t treated the way I was. Fix society. Please.”

Alcorn’s suicide, and her call to fix society, resonated deeply with Tom.

“Her story made me realize how lucky I was that I could be accepted by my family and my extended family in Israel,” he said. “I would have [otherwise] dragged it out for so much longer.” After Alcorn’s death, he explained, “I felt like it was my duty, since I had all this support.”

According to The Trevor Project, a national group that provides suicide prevention services to gay, lesbian, bisexual and transgender youth, nearly 50% of all transgender teens seriously contemplate suicide, and nearly a quarter report having made a suicide attempt by age 20.

Tom and his parents told the interim head of school at Tehiyah, Elise Prowse, that Tom was transgender and that he wanted to make it public. Within days of their meeting, Prowse created a gender-neutral bathroom at Tehiyah and got in contact with Gender Spectrum, a not-for-profit organization that provides gender-related education, to figure out the best way forward.

Together they created a gender transition plan for Tom, with the goal of having him come out before his class trip to Israel at the end of March — so that he could comfortably use the male restrooms while traveling with his classmates.

“We were very detailed and intentional about the planning,” said Prowse, who consulted closely with Tom while designing the process. The plan included educational workshops on gender with the faculty, parents and students at Tehiyah. Everything culminated with Tom’s March 13 coming out speech and naming ceremony.

“The degree to which the parent community not only showed up, but clearly really wanted to embrace this family and young person, was really lovely,” said Joel Baum, senior director of professional development and family service at Gender Spectrum. “As a Jewish day school, they have some very clear statements about their values, and what it means to be a community based in those values. I’ve never seen anything done in that way before. It was really beautiful.”

Giddy with the unanticipated attention that his speech is receiving online, Tom hopes that his story will help others become comfortable with who they are.

“I think that it’s the parents’ job to leave an open door for their kids, like my parents did for me, because you never know,” Tom said. “Being trans doesn’t make you unclean; it doesn’t make you weird, or different. People that are trans are just doing what we all should be doing: They’re embracing who they really are.”

Can Jewish Transgender Teen’s Successful Coming Out Provide Model for Others?