The Case Against ‘Jews Only!’ 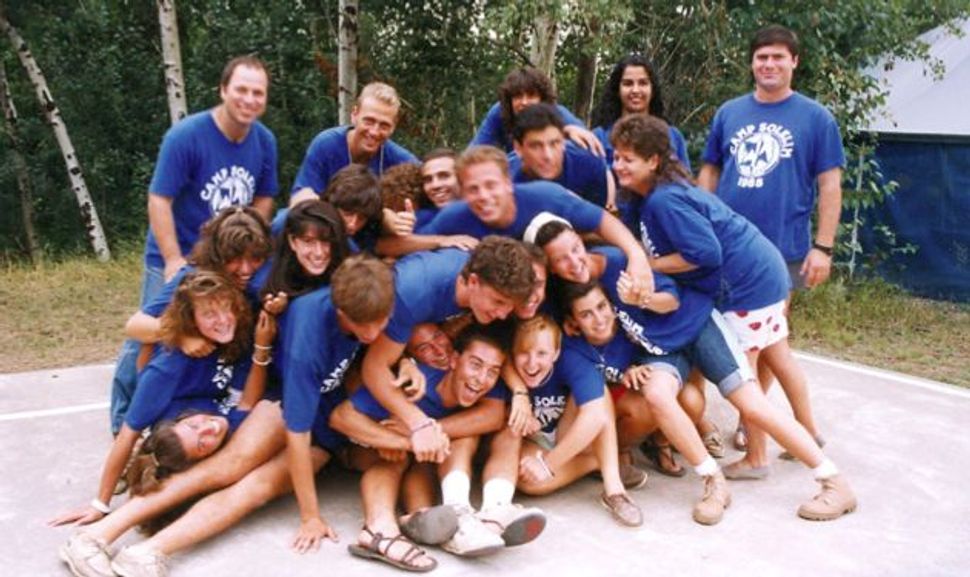 Back in the Day: Campers having fun in the summer of 1988. Image by Courtesy of Camp Solelim

A summer camp I attended as a teenager has lately been burning up my Facebook feed. A couple of weekends ago, some of my childhood friends in Toronto paid $100 a ticket to attend a dinner in honor of Camp Solelim’s 50th anniversary. It sounded, from their posts, like they had fun reminiscing and reverting to their teenage selves. (One of them, always a troublemaker, apparently spent the night stealing from the ersatz tuck shop — where the candy was free anyhow.)

Then, in early March, a news story appeared about a non-Jewish boy who had attended Solelim’s feeder camp, but was recently told he couldn’t enroll at Solelim for this coming summer because he wasn’t Jewish. A social media campaign supporting him started to build, the camp responded with a statement, and then the boy and his dad went on TV to plead their case.

The summers I was 14 and 15, I spent six weeks at Solelim. Back then it was a fairly desolate campsite outside the nickel-mining town of Sudbury, Ontario, six hours north of Toronto. I met one of my best friends there, and had some of the most formative experiences of my life (both positive and negative — long stories, all of them). So I feel a personal investment in the camp’s decisions.

I’ll acknowledge that there are two valid positions here, even if the discussion has already gotten a little distasteful. There are reasonable arguments to make on both sides: Many feel it is silly or shortsighted for the camp to exclude a potential non-Jewish ally, while the camp and its defenders argue for the value of creating Jewish-only spaces.

Because part of my job now, two decades after my own Solelim summers, is running educational summer programs for a Jewish not-for-profit, I can offer something valuable to the discussion: real cases that take us out of the realm of the hypothetical. At the Yiddish Book Center, where I work, we do not restrict admission to Jewish applicants for our educational programs for teenagers, college students, or young adults. And it makes these programs so much stronger.

For one thing, not restricting our programs to Jews means that some people who may not be sure if they’re “Jewish enough” are more likely to apply. Jews by choice, multiracial Jews, and people from complex family situations often aren’t really sure whether or not an organization will consider them Jewish — and with good reason: Plenty of organizations don’t. Not saying “Jews only!” in our marketing helps to make all those people know they’re welcome.

But we do also regularly accept some participants who are, unambiguously, not Jewish. And here’s the simplest reason why: A small number of non-Jews, for a variety of personal or intellectual reasons, find themselves powerfully drawn to Jewish culture, and it would be a lost opportunity to turn them away. Let me give you a few examples of the people I think about whenever this subject comes up for discussion at the center (which it does, every now and again).

I think of past participants in my programs, like Anne Grant, who works as the cultural arts manager of the JCC of Greater New Haven and in her spare time curates “Shmattes,” an exhibit of kitschy Jewish T-shirts that, she argues, has a lot to teach us about contemporary Jewish identity. Or Cheyenne McClain, who works at the Oregon Jewish Museum and often sends me beautiful, liturgically rich, homemade works of art for the Jewish holidays. These, and many others I could name, are smart, talented, well-educated 20-somethings who have committed their professional lives to serving the Jewish community (which is more than I can say for the vast majority of the people who went to Solelim with me).

I think especially of a colleague, Christa Whitney, who created and runs the Wexler Oral History Project at the Yiddish Book Center. She started out as a student at the center’s summer Yiddish program, before my time, and has spent the past five years interviewing hundreds of people, across the United States, Canada, Eastern Europe, and Israel, about their lives as Yiddish speakers and Jews. She interviews them in English and in her fluent Yiddish, and if you saw a clip of the late Leonard Nimoy speaking Yiddish, she was the one asking the questions. Without exaggeration, Whitney knows more about Jewish history, culture, and tradition than 99.99% of Jews in Toronto or anywhere else, and she does all this as a non-Jew.

Is Christa extraordinary? Sure. So are the others I’ve mentioned, and so are many other non-Jews I could name who are deeply committed to Jewish culture. But why would anyone pass up the chance to welcome someone so extraordinary into his or her institution or community?

Some might argue that there’s a difference between a camp, where kids spend much of their time playing basketball, swimming, and (at least when I was there) schlepping logs from one end of a field to the other, and the kind of program I run, where teenagers read great works of Jewish literature, or learn Yiddish. But it seems to me a telling irony that the more substantial a program is — the more rooted in Jewish history, language, religion, and culture — the less threatening it will be to the organizers that a non-Jew might want in. It seems to be only when programs are flimsy excuses for Jews to socialize with other Jews, without any genuine Jewish content, that this problem arises.

It’s within Canadian Young Judea’s legal rights, apparently, to exclude a non-Jew, as it is probably within the rights of many other Jewish camps, schools, and educational programs to do so. But I hope an institution that means so much to me might rethink a policy grounded in a vague, hypothetical, and likely factitious fear, rather than in actual experiences.

Josh Lambert is the academic director of the Yiddish Book Center, visiting assistant professor of English at the University of Massachusetts Amherst and the author, most recently, of “Unclean Lips: Obscenity, Jews, and American Culture.” (NYU Press, 2013).

The Case Against ‘Jews Only!’