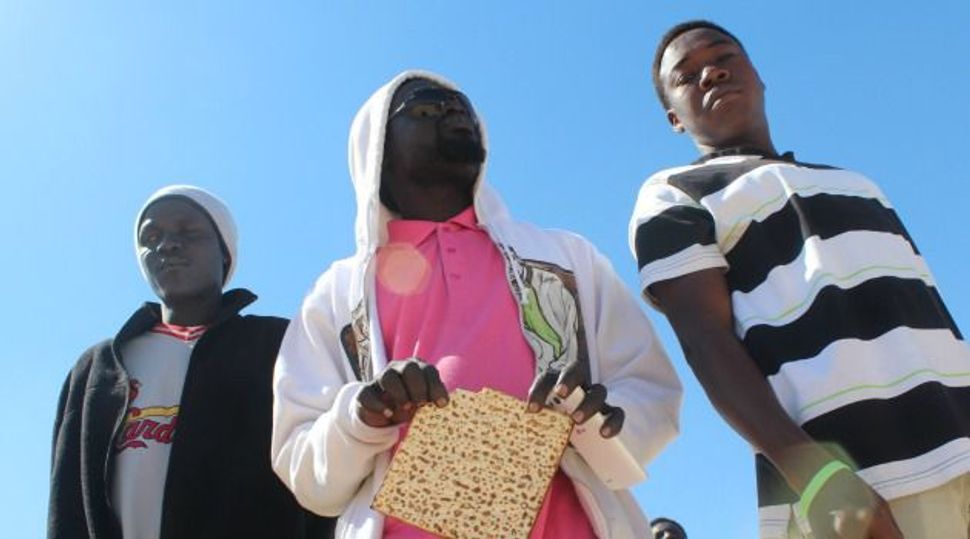 Matzo Means Hope: African immigrants celebrate a mock Seder at the detention center where they are being held in the Negev Desert. Image by Roy Edan

Perhaps the most relevant Seder in Israel took place in the most isolated of places.

The Holot Residency Center is located near the border with Egypt, an hour’s ride southwest from the city of Beersheba into the desert. This detention facility is home to people like Mutasim Ali, who fled the war-torn Darfur region in Sudan and crossed Egypt into Israel back in 2008. Ali has been confined to Holot for the past 10 months.

“Passover is a time for Jewish people all over the world to tell the story of their liberation from Egypt and celebrate the value of freedom,” said Ali, 28. “It is also a time, I hope, that they can consider the freedom of others. Passover is an opportunity to look at how Israel is detaining people who have come to it for shelter and ask whether such policies are in line with the Jewish spirit.”

The asylum seekers organized the mock Refugee Seder in March to raise awareness of their struggle against Israel’s policy of detaining them and denying them a fair asylum procedure. The event, which took place outside Holot because the facility’s rules disallow visitors, was organized in cooperation with Israeli human rights activists. The participants included asylum seekers detained in Holot, asylum seekers that live in Israeli cities and about 150 Israelis who came on organized rides from Tel Aviv and Jerusalem. 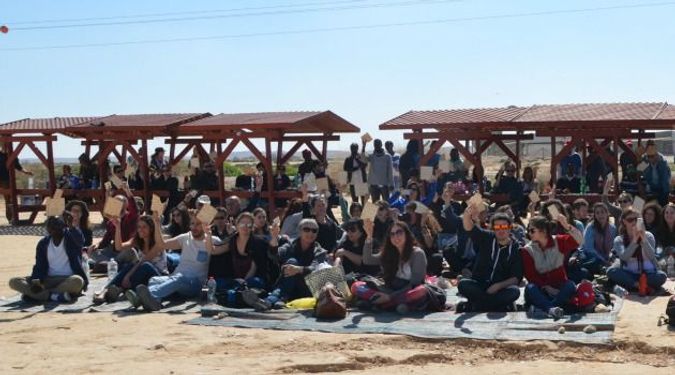 Israeli activists join some of the nearly 2,000 immigrants held at Holot. Image by Yael Agur Orgal

During the event, which was held on a Friday afternoon two weeks before Passover, Glassenberg distributed a special Haggadah that incorporated — in Hebrew, Arabic, English and Tigrinya —modern African refugee stories and the traditional Jewish Exodus story. Participants sat together around symbolic Seder tables and shared their exodus stories over matzo and injera, a Passover-friendly flatbread made out of tuff flour and popular in Eritrea and Sudan.

“The most important part of the Seder is the Magid,” Glassenberg said. “We are doing a symbolic Magid, which means we are doing discussions circles, where refugees and Israelis are sitting together, telling each other stories OF how we came to this country, how we got to be here and what our hopes are for the future.”

The Seder and the approaching holiday is all the more poignant because the African immigrants may soon face even grimmer choices.

The government is planning to order Sudanese and Eritreans to leave Israel for a third country, most likely Uganda or Rwanda, Haaretz reported on March 31. Those who refuse will be sent to an Israeli prison, where conditions are much harsher than those in Holot.

There are some 1,700 Sudanese and Eritreans in Israel who, like Ali, have been detained without trial at Holot. The asylum seekers are allowed to exit the facility, but they must sign in every evening; therefore, they cannot get very far. They live in dorms with shared bathrooms and a dining room that serves one warm meal a day.

Overall, there are about 47,000 Sudanese and Eritreans in Israel — most are renting crowded rooms in Tel Aviv’s poorer neighborhoods — and fewer than a dozen have been granted refugee status. In other countries, 58.8% of asylum applicants from Sudan and 67.2% of asylum applicants from Eritrea were recognized as refugees in 2013, according to the United Nations’ Refugee Agency. In Israel they receive temporary protection from deportation but are denied access to the job market and to sufficient medical services or welfare, according to Human Rights Watch. 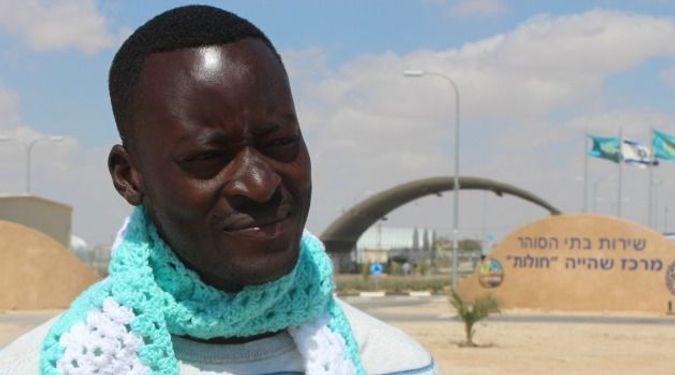 Like other African refugees, Mutasim Ali hopes the Seder will raise awareness about their plight. Image by yermi brenner

The country’s Supreme Court has criticized Israel’s detention of Eritrean and Sudanese asylum seekers . The U.N. High Commissioner for Refugees’ representative in Israel stated publicly that detention of asylum seekers does not comply with the norms of international human rights. Amnesty International has also claimed that Israel’s treatment of Eritreans and Sudanese is a violation of its obligations under the 1951 Refugee Convention, and that Israel’s asylum procedures are particularly acute for those in detention.

Israel’s government calls the Sudanese and Eritreans “infiltrators.” In a recent Supreme Court hearing, the state defended the Anti-Infiltration law that makes it legal to hold the “infiltrators” in detention centers. State lawyers argued that in the Holot Residency Center, all the needs of the “infiltrators” are met, including health care, welfare, occupational trainings and informal education.

According to the state’s defense of the Anti-Infiltration law, Eritrean and Sudanese that came to Israel are mostly men of the working age who chose to leave their country because of the difficulty of life there; they traveled through safe African countries and U.N. camps where they could have been protected, and chose to come to Israel because it is the only Western state in the continent. The Anti-Infiltration law is needed, state lawyers wrote, because Israel’s immigration policy requires tools to deal with illegal immigration and to minimize it.

Going back home is not an option for Teshoma Nega, an Eritrean who fled to Israel in 2008 and has been detained in Holot for a year. He said if he returns to his native country he will face torture and prison, and might even be killed. Nega, 35, was one of the more emotional speakers at the Holot Seder. He said he and his fellow asylum seekers have been jailed without committing any crime, and punished just because they came to Israel and asked for protection.

“Life in this prison called Holot is a life of sadness and a life of uncertainty. It is a place that depresses the soul and the mind and breaks the spirit,” Nega said under the scorching desert sun. “Everything about Holot is there to remind us that we are not wanted in Israel. The purpose of this place is to pressure us until we leave, no matter where. But we have nowhere to go.”

Nega’s asylum application has not been answered, and Nega is not sure when he will be allowed to leave Holot. He finished his engaging speech by thanking the 150 or so Israelis who came to celebrate the Seder in Holot. He said they give him hope.

“We hope that you can help us make our voice heard louder so that we can get better treatment, get our rights as refugees and live a normal life,” Nega said, standing outside the detention facility. “Remember us when you go home. Talk to people about us. Tell them our story, what you heard right now. We hope that this place will be closed soon and our suffering will come to an end.”