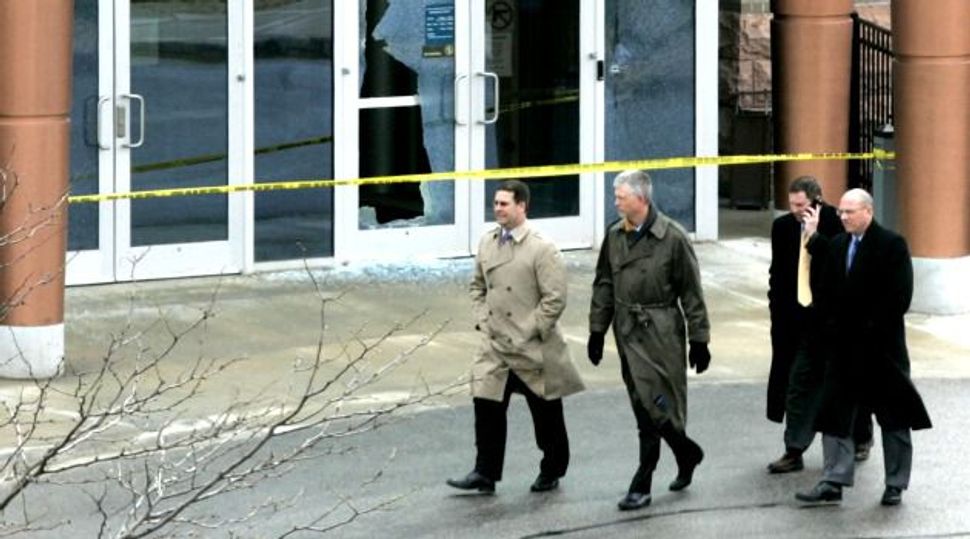 Damage Control: Kansas City officials examined the scene of a shooting at the city’s Jewish Community Campus in April, 2014. Image by Getty Images

Attacks on Jewish sites in Denmark and France early this year have set American Jews to worrying: Do U.S. Jews, too, face an increased threat?

National Jewish groups have an answer to those worries: a secretive not-for-profit organization called the Secure Community Network.

Todd Stettner was skeptical of SCN before 2014. The president and CEO of the Jewish Federation of Greater Kansas City, Stettner had great relationships with local cops, and saw no need for an outside group. That changed after a neo-Nazi named Frazier Glenn Miller killed three people at two Jewish sites in Stettner’s community in Kansas last April.

“He had connections to the Department of Homeland Security, to all the federal resources,” Stettner said of Paul Goldenberg, SCN’s national director, who flew to Kansas City after the attack. “He set us up to meet all the right people.”

Later, Goldenberg connected Stettner’s group to private security firms, too. A developer of safety smartphone apps who had a partnership with Goldenberg’s separate for-profit company came to Kansas City to install 100 copies of her app on Federation staff’s phones for free.

SCN exists at the nexus of government, private enterprise and not-for-profits. It has no employees; its activities are subcontracted out to one of Goldenberg’s private firms. Its sponsors, the Conference of Presidents of Major American Jewish Organizations and the Jewish Federations of North America, boast that the organization has been able to deliver millions of dollars in programs through its public and private partners despite its relatively small budget of less than $500,000 a year.

Now, the group is set to expand its services internationally, following a meeting in early March with Jewish communal leaders. Plans are in their earliest stages, but a spokesperson for JFNA acknowledged that the possibility of exporting SCN was under discussion.

SCN’s five-man board of directors includes three of the most influential Jewish communal executives in the country: Malcolm Hoenlein, executive vice chairman of the Presidents Conference; David Harris, executive director of the American Jewish Committee, and Jerry Silverman, president and CEO of JFNA. Yet unlike the charitable organizations these board members run, SCN, though also a charitable enterprise, veils its finances under layers of for-profit contractors. Of the $3.2 million the organization has spent in the past eight years, $2.7 million has been paid to Goldenberg or to companies he controls. No further public information about how that money is spent is available.

“We believe SCN has been as transparent as possible for a critical communal security agency,” JFNA and the Presidents Conference said in a joint statement to the Forward. The JFNA spokesperson declined to say how much Goldenberg was individually compensated, but said that SCN’s board conducts a monthly review of the group’s expenditures.

Asked whether Goldenberg or SCN had ever suggested that a charity enter into a contract with a for-profit company in which any director of SCN had an interest, the JFNA spokesperson replied, “To our knowledge, no such contract has been entered into, ever.”

Goldenberg did not respond to a request for comment from the Forward. His company, SCN, responded to questions through a spokesperson for JFNA.

Founded in 2004, SCN grew out of a jurisdictional squabble among national Jewish groups over access to the FBI. Early in 2003, Newsweek had reported that the FBI had told the Anti-Defamation League’s national director, Abraham Foxman, of a terrorism threat to Jewish sites. Foxman’s Jewish world competitors were miffed that they learned about the warning by reading Newsweek.

“There were all kinds of contradictory messages,” AJC’s Harris told The New York Jewish Week at the time.

Initially, the plan was for a new entity — then called the Secure Community Alert Network — that would simply inform Jewish organizations of pertinent security threats. Goldenberg’s name is mentioned in early press accounts, as is that of Steve Pomerantz, a former senior FBI counterterrorism official who now serves as director of counterterrorism programs at the Jewish Institute for National Security Affairs, a hawkish pro-Israel think tank. Pomerantz and Goldenberg, at the time, were consultants for AJC.

From its beginnings as a network that sent out alerts, SCN pivoted to providing training sessions and webinars to Jewish groups. Through the organization’s decade-long history, Goldenberg has stayed on as its public face.

Goldenberg has broad shoulders, a classic police officer’s mustache, and a colorful history in law enforcement. In the early 1980s, he was a young, up-and-coming undercover cop with the Broward Sheriff’s Office in South Florida. During one epic eight-month operation at a Fort Lauderdale car wash, Goldenberg and a fellow officer bought 55 stolen cars, 130 stolen credit cards and a blue parakeet, eventually netting at least 33 arrests; Goldenberg won a Deputy of the Year award from his department in 1984. Then, in 1985, the unit in which Goldenberg served was disbanded and his supervisor and two deputies were fired amid allegations of misappropriation of funds and other misconduct. Goldenberg, who was not accused of wrongdoing, resigned from the Sherriff’s Office. No charges were filed in the case.

Goldenberg moved to New Jersey, found a job with the state attorney general, and in 1992 was named head of the attorney general’s new Bias Crime and Community Relations Office, which became widely known as the first statewide office in the country to focus specifically on bias crimes. He worked closely with Jewish communal officials there, including Ken Stern, a longtime extremism expert for AJC who now is the executive director of the Justus & Karin Rosenberg Foundation.

“He’s one of the few people that had both the law enforcement background and connections, and also the credibility inside the Jewish community,” Stern said.

Goldenberg left the attorney general’s office in 1994 and took a number of positions, including working as chief investigative strategist for the Senate Whitewater investigation, which looked into a set of Clinton family real estate deals. In 2004, when SCN was created, Goldenberg was a consultant for AJC and also had a for-profit security consulting company called the National Public Safety Learning Center.

In the statement, the Presidents Conference and JFNA said that SCN’s contract with Goldenberg’s for-profit company is reviewed each year.

Since SCN’s founding, Goldenberg’s personal business interests appear to have grown. In 2007 he founded another company, Cardinal Point Strategies, which describes itself as a “strategic advisory and consulting firm” and lists the same address as NPSSG. Cardinal Point lists a staff of 12 on its website.

Goldenberg is also a member of the board of directors of the publicly traded security firm Viscount Systems Inc., which he joined in 2011; he is also, as of 2012, on the board of BeSafe Technologies, which sells emergency response systems to schools. Both companies were sponsors of a 2014 SCN security conference.

Goldenberg has also expanded his work with other not-for-profits. Through Cardinal Point, he has advised the County Executives of America, an association of county governments, and the American Hotel & Lodging Association, a trade group. He is also a senior adviser and strategist to the chairman of the board of Crime Stoppers USA.

In the meantime, Goldenberg has been named to increasingly prestigious positions on Department of Homeland Security advisory boards, culminating in 2013 with his three-year appointment to the Homeland Security Advisory Council, alongside security experts like former CIA director William Webster, and Bill Bratton, New York City’s police commissioner.

These confluences of private and public connections are key to SCN’s business model. In a statement from a JFNA spokesperson on behalf of SCN, the organization boasted that SCN had obtained “in-kind services totaling millions of dollars” for the Jewish organizations it supports.

“Through our extensive partnerships, we’ve garnered direct services, expertise and outreach from homeland security & private sector partners on behalf of our member organizations,” the statement read.

For Stettner in Kansas City, Goldenberg’s apparatus provided much-needed help at a difficult time. Goldenberg arranged meetings with federal, state and local law enforcement that resulted in massive cooperation from authorities. Homeland Security did assessments of federation properties, and local police gave federation buildings extra protection for two months. Goldenberg introduced Stettner to the head of a major security company and later helped Stettner vet candidates while he was hiring a security director.

“Paul kept tabs on what we were doing,” Stettner said.