Which of 3 Hillary Clintons Will You Vote For (or Against)? 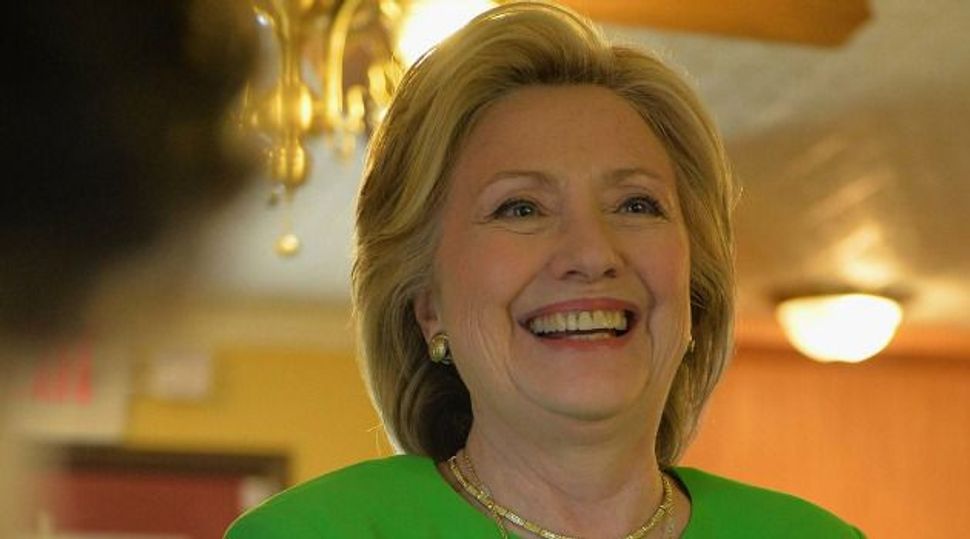 There’s Clinton the First Lady, whose few attempts to wade into the Israeli-Palestinian conflict led some American Jews to mark her as an Arab sympathizer; then there’s the New York senator, a role in which Clinton won praise from across the Jewish gamut for her support for the state of Israel; later came the State Department era, where, as chief U.S. diplomat, Clinton’s tough tone toward Israel and its leader, Benjamin Netanyahu, provided supporters of his government’s policies with a precious “I told you so” moment.

These critics see Clinton’s different phases as evidence that the recently declared Democratic presidential candidate has flip-flopped when it comes to Israel. Clinton supporters argue back that the different positions stem from the role she played on specific issues in each phase, not from any shift in her fundamentally positive approach toward Israel.

“Her record has been consistently supportive of Israel and anyone in the organized Jewish community would say that,” said Nancy Kaufman, CEO of the National Council of Jewish Woman. On the other end of the Jewish political spectrum, conservative New York Assemblyman Dov Hikind sees anything but consistency. “You never know which Hillary is showing up,” he said. “I’m not sure what she believes now.”

On the issue of Israel, Clinton’s image as First Lady during the presidency of Bill Clinton was tarnished, to a great extent, by a brief moment in November 1999. The administration was working full force at the time to try and save the Israeli-Palestinian peace process. The White House sent Hillary Clinton out to the region to attend an event with her Palestinian counterpart, Suha Arafat, the wife of Palestinian leader Yasser Arafat. At the event, Arafat delivered a scathing speech in which she accused Israel of deliberately causing cancer among Palestinian children by poisoning the air they breathe. Clinton, listening to the speech through an interpreter, sat motionless and later kissed Arafat on her cheek.

Israelis were furious, as were many in the American Jewish community. Republicans used video of this moment in political ads they later ran against Clinton when she sought a Senate seat.

Her mostly hawkish critics saw the episode as consistent with her husband’s policy of pressuring Israel, at the time led by Netanyahu, to make concessions in the Oslo peace process set in motion by Yitzhak Rabin and Arafat in 1993. They viewed the Clinton administration as being determined to reach a final peace deal in the Middle East at Israel’s expense.

During her 2000 campaign for the Senate, while still first lady, Clinton also had to spend time denying that she had used an anti-Semitic slur in 1974 against a campaign manager for her husband after Bill Clinton lost a early bid for Congress. Jerry Oppenheimer, an author and former reporter for the National Enquirer, made the allegation in an unauthorized Hillary Clinton biography, published as she was launching her Senate drive. Oppenheimer cited statements from the campaign aide and two others. Both Clintons vehemently denied the charge.

Clinton supporters provide a different account of her early years on the public stage. They point to her initiative, as First Lady of Arkansas starting in 1978, to adopt an Israeli program designed to help young mothers and her strong partnership with the local and national Jewish community.

The Suha Arafat flap, said former Clinton aide Ann Lewis in a December 2014 interview with the Forward, “did cause a ripple with the Jewish community at the time.” But Lewis believes it had no long lasting effect. “She addressed it in her campaign and explained what had happened.”

Indeed, whatever record or image Clinton may have had in her years as First Lady when it came to Israel, all changed once she decided to run for the Senate from New York, the state with the largest Jewish population in America.

In a well-organized sweep, Clinton reached out to the local and national Jewish community and eliminated any hint of criticism of Israel from her positions. Her campaign, which coincided with the breakdown of the Israeli-Palestinian peace process and the beginning of the second Intifada, provided Clinton with an opportunity to recalibrate her positions. In this phase, she effectively embraced the views of the government in Jerusalem, placing blame for the outbreak of violence squarely on the Palestinians.

Her positions as senator helped Clinton dispel any concerns Jewish activists might have had about her days as First Lady. Clinton emerged as a strong supporter of Israel in ways that at times went beyond the Democrat’s party line. She took on the issue of alleged incitement against Jews and Israel in Palestinian school textbooks and was the leading advocate for bringing Israel’s emergency medical service, Magen David Adom, into the International Red Cross Committee.

She even held a photo opportunity in an MDA ambulance during a visit to Israel. Hikind, the New York state assembly member, recalls Clinton donating $1,300 for the purchase of bulletproof vests for use by settlers in the occupied West Bank. Hikind said he got some grief from some Jewish conservatives for forging close ties with Clinton then, but reaffirmed that her views were highly supportive of Israel at the time.

For all this, Clinton’s in-depth involvement in the Middle East came only in her third political phase, when she served as Secretary of State during Obama’s first term in office. Clinton was tasked with carrying out a drive to renew Israeli – Palestinian peace talks based on an American demand that Israel temporarily freeze its settlement activity in the West Bank. The demand strained relations between Obama and Netanyahu and thrust Clinton into the debate as the administration’s top diplomatic official.

Clinton adopted the Obama administration’s approach wholeheartedly. She shuttled between Washington, Jerusalem and Ramallah, the Palestinians’ West Bank seat of government, in attempt to use the window provided by the settlement freeze to resume peace talks. When this effort failed Clinton kept on trying, unsuccessfully, to push the Israeli government forward. “I’ve known Bibi a long time and I have a very good relationship with him, in part because we can yell at each other, and we do,” Clinton said in July 2014 CNN interview. “And I was often the designated yeller.”

In her book, “Hard Choices” Clinton described the Israeli leader as a “complicated figure.” Her description in the book of Palestinian life under Israeli rule also drew controversy for her use of the word “occupation.” Some supporters of Israel viewed the term as reflecting a bias toward the Palestinians.

But while her tenure as secretary of state left her disillusioned about Netanyahu and the prospects of peace in the Middle East, it also allowed Clinton to demonstrate some distance from Obama and his policies toward Israel, mainly on the issue of Iran.

Clinton endorsed U.S. negotiations with Iran and was critical of Netanyahu’s decision to address Congress in March without first informing the White House. But in carefully worded remarks she took a more skeptical approach toward the prospects of a nuclear deal with Iran, positioning herself just a few inches closer to Netanyahu on this issue.

After a framework agreement was reached on April 2, Clinton backed it and praised Obama and her successor, John Kerry, for their diplomatic effort. Still cautious, however, she warned that in a final accord “the bar must be set high.”

Moreover, after a series of public clashes between Netanyahu’s government and the administration, Clinton recently told Malcolm Hoenlein, executive vice chairman of the Conference of Presidents of Major American Jewish Organizations, that relations between Washington and Jerusalem should return to a more “constructive footing.” Her comment was viewed as a signal that if elected president, she’d depart from the confrontational approach that has lately dominated the Obama-Netanyahu relationship.

For Jewish communal leaders focused on Israel-related issues, Clinton’s decades-long career of Clinton in public service provides little clarity when it comes to her stance today. Many are particularly anxious to know where she stands on the specifics of a nuclear deal with Iran.

“She will have to express her view, but we know that in her essence she is committed to the security of Israel, she’s a friend of Israel,” said Haim Saban, an Israeli-American Hollywood billionaire who has contributed approximately $30 million to the Clintons’ political campaigns, in an interview with Israel’s Channel 1 news. “There is no problem in regards to the regards to US-Israel relations when Hillary Clinton will be president. No problem.”

Saban, who took to the Israeli airwaves on April 12 to defend Clinton, said he had heard privately from the candidate about her real position on the Iranian deal. “She has a view and a very defined view on this issue,” Saban said, “but I cannot talk about it.”

Which of 3 Hillary Clintons Will You Vote For (or Against)?