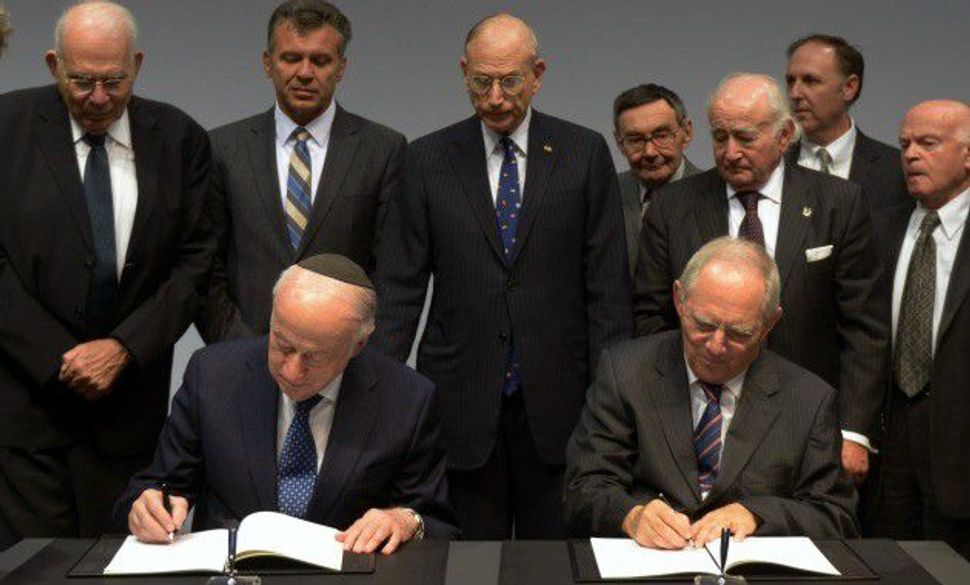 When it was revealed that an insider fraud had robbed the world’s leading Holocaust charity of $57 million meant to go to poor Holocaust survivors, the German government, which supplied these funds as reparations, was silent about the loss.

It was a silence that persisted even after it became clear that eight years before the fraud was revealed, senior officials at the Conference on Jewish Material Claims Against Germany had received a tip-off about the ongoing crime but failed to seriously investigate the matter.

Now, a letter obtained by the Forward indicates that more than a year and a half after the conviction of the fraud’s ringleader, Germany demanded compensation from the Claims Conference — and appears to have found a way to do so that allows the Claims Conference to avoid the awkward appearance of sending money meant for survivors back to Germany. The letter, dated December 23, 2014, from Germany’s Ministry of Finance to the Claims Conference, stated that Berlin would simply consider a prior commitment by the conference to contribute €54 million — equal to $57 million — to a new Child Survivor Fund as serving to “compensate for the financial damage arising from the cases of fraud.” As it happens, $57 million was the estimate of how much a ring of corrupt Claims Conference staffers stole for themselves and their accomplices over more than 15 years by forging fraudulent claims for compensation to survivors. A Claims Conference spokeswoman, Hillary Kessler-Godin, told the Forward that the charity rejected Germany’s demand for compensation and made clear that “the €54 million was a separate, stand-alone contribution to the Child Survivor Fund.”

But Kessler-Godin would not clarify whether the response was verbal or in writing, nor would she say when, how or whether the Claims Conference would compensate the German government for the €54 million. “We sent a response and will not be adding to it,” Kessler-Godin said in her final email to the Forward, sent on April 17.

The episode might never have come to light if someone had not leaked the German finance ministry’s letter to the Forward.

Andrew Baker, a Claims Conference board member who took part in the negotiations over the Child Survivor Fund last August, said that the issue of Germany requiring compensation for the fraud was never raised at that time.

Baker was surprised to learn of Germany’s latest demand. He said that no one at the Claims Conference informed him of the December letter.

The Claims Conference board is made up of representatives of more than 25 Jewish organizations from around the world. Many board members did not respond to a request for comment. Most of those who did respond spoke only off the record or declined to comment.

None of the board members said they were aware of the letter before it was revealed in a story published April 17 on Forward.com.

Several board members were concerned that anything they said to the Forward could strengthen Germany’s desire to receive compensation for the $57 million lost in the fraud.

Roman Kent, a board member who represents the American Gathering of Jewish Holocaust Survivors, said the letter is not even an issue for him. “I didn’t see the letter and I don’t care to even know it,” Kent said. Asked whether as a board member, Kent was concerned that Germany appeared to be asking for compensation for the fraud, he said: “I am not interested. To me, it is the end of the story that we were finally able to get for child survivors a certain amount of money.”

Martin Chaudhuri, a spokesman for Germany’s finance ministry, refused to comment on the letter, saying that it was confidential and that no one was supposed to see it.

The request for compensation came out of a December 3 meeting of the German Parliament’s Budget Committee, which holds the purse strings for the German government.

The Forward contacted all 41 members of the budget committee on April 20 to ask for clarification about the compensation request. No one responded before press time on April 22.

The compensation demand is the latest twist in a drama that has gripped the Holocaust charity since 2009. That year, Claims Conference officials contacted the FBI with evidence that their own employees were filing fraudulent Holocaust claims.

A subsequent investigation uncovered a fraud masterminded by Russian-speaking Claims Conference workers, stretching back to 1993. The employees took hundreds of thousands of dollars in kickbacks in return for filing fraudulent claims on behalf of thousands of accomplices in the Russian-speaking Jewish community. Ultimately, 31 people, including 10 former Claims Conference employees, pleaded guilty to or were convicted of the fraud.

In 2013, as the fraud’s ringleader, Semen Domnitser, was being sentenced to eight years in prison, the Forward revealed that Claims Conference officials were warned of their employees’ fraudulent behavior as far back as 2001. Several key officials, including the charity’s current chairman, Julius Berman, were involved in investigations into the fraud allegations in 2001, but they failed to put a stop to it, or even to follow up on recommendations urging them to probe further.

In recent years, Claims Conference officials have pointed to Germany’s willingness to keep paying Holocaust restitution as a symbol that the fraud has had no repercussions. If anything, they have argued, Germany agreed to pay even more after the fraud was discovered than it had done in previous years.

But as the German Parliament committee’s decision shows, not everyone appears willing to accept that Germany should just forget about it.