This Portuguese Diplomat Was Disgraced For Saving Jews. Now, He’s Getting His Due.

On a sunny Sunday morning in late April, the family of an unheralded hero diplomat during the Holocaust took one more step forward in their effort to rehabilitate his ruined name.

Aristides de Sousa Mendes, the Portuguese envoy who saved 30,000 people during World War II — 10,000 of them Jewish — was consigned to ignominy by his own government as a reward for his achievement. Stripped of his job and pension, he and his family were forced into a life of poverty in the years following World War II.

But on April 19, he was honored by Washington, D.C.’s Adas Israel Congregation and inducted into that power shul’s Garden of the Righteous memorial.

For his grandchildren, assembled from the United States, Canada and Europe, the ceremony was yet another testimony to the injustice done to their grandfather by his government, one that brought misery to his life and led his children to flee their homeland. It is an injustice even Portugal has come to recognize.

“I think my grandfather would be very proud and happy,” said Linda Mendes, who now lives in Montreal. “He’d be so proud that it’s not only Portugal, but that so many human beings know about his story.”

This coming June, family members and relatives of those rescued by the Portuguese diplomat will mark the 75-year anniversary of Sousa Mendes’s frantic attempt to save as many Europeans as he could from the hands of the Nazis, by issuing thousands of visas within several days before being ordered back to Lisbon, Portugal by the country’s dictator, Antonio Salazar. The celebration will mark the culmination of a decades-long effort to not just clear Sousa Mendes’s name, but to honor it in the history of democratic Portugal.

While pleased that the world has corrected the wrongdoing done to their grandfather, many of Sousa Mendes’s descendants still carry the scars passed on to them by their parents, the children of Sousa Mendes. Due to their father’s actions during World War II, these offspring endured long years of humiliation and hardship.

“My father couldn’t go to high school,” Linda Mendes recalled. “No one wanted to be seen with Aristides and his family. People would cross the street not to meet Aristides. It was a very hard time.”

Aristides de Sousa Mendes, who was born to an aristocratic family in 1885, took his place in Portugal’s foreign service alongside his twin brother Cesar de Sousa Mendes. For years, he served across the globe, including in the United States, before his final post as consul general in Bordeaux, France, in 1939. A devout Catholic, Sousa Mendes, who had 15 children, took time off every day to pray the Rosary.

His position in Southern France became critical as Nazi forces moved to take over the country. Portugal, officially neutral, shut its gates to refugees fleeing the Third Reich following an order by Salazar, known as “circular 14,” that forbade issuing visas to Jews and other Europeans expelled from their countries.

But a steady stream of refugees, viewing Portugal as their last way out of Europe, gathered outside the consulate in Bordeaux pleading for visas. This is when Sousa Mendes met Rabbi Chaim Kruger, a Polish refugee who told the Portuguese diplomat he would not accept his own visa until all the other refugees waiting got theirs as well.

Stating, “I would rather stand with God against man than with man against God,” Sousa Mendes, assisted by his wife, children and Kruger, created on June 16, 1940 a visa assembly line working around the clock. The emergency set-up produced an estimated 30,000 visas, a third of them for Jews. Spanish artist Salvador Dali, Margaret and H.A. Rey, authors of the children’s classic “Curious George,” and Crown Prince Otto von Habsburg were also among the visa recipients, as were Kruger and his family. 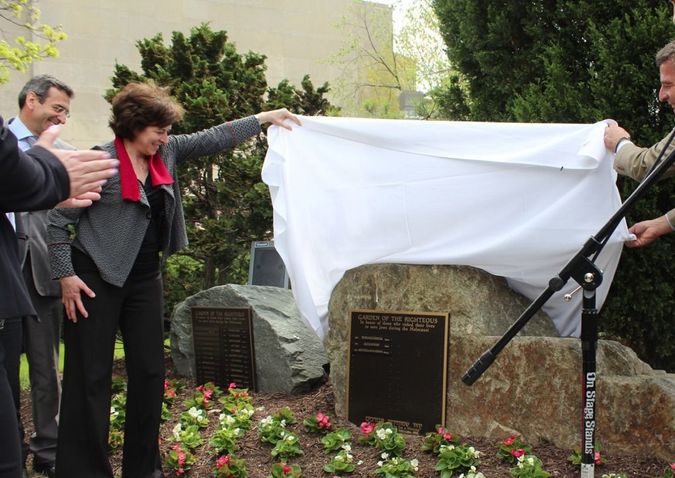 Grandchildren of Sousa Mendes unveil a plaque in Washington recalling his heroism. Image by Nathan Guttman

When the Germans took over Bordeaux, Sousa Mendes travelled to nearby concentrations of refugees, issuing more visas before being called back on July 8. In Lisbon, he was charged with disobedience and stripped of his diplomatic titles and benefits. At the order of the regime, his former colleagues turned their backs on Sousa Mendes, who was not allowed to go back to practicing law and could not find a job. His family was shunned and condemned to poverty.

“My father had told me of times when he would be in class and they would ask him, ‘Are you the son of Aristides or Cesar?’ And when he’d say Aristides, they’d say, ‘Don’t even take the test, you’ll fail,’” said granddaughter Sheila Abranches-Pierce, who lives in California. “It was very rough. They went from a comfortable life to a life of burning doors to stay warm in the winter time.” One by one, as they reached adulthood, Sousa Mendes’s children left Portugal and resettled in other countries. From abroad, they launched their battle to restore Sousa Mendes’s name.

Sousa Mendes’s story has been described by Israeli historian Yehuda Bauer as “perhaps the largest rescue action by a single individual during the Holocaust.” But it resembles that of several other international diplomats during World War II who defied their countries’ indifference to the plight of European Jews and used their power to issue visas as a lifeline. As with Sousa Mendes, many of these men’s good deeds also did not go unpunished.

The most well-known member of this group is Swedish diplomat Raoul Wallenberg, who helped save an estimated 100,000 Hungarian Jews and was later imprisoned by the Soviet Union. Soviet authorities never acknowledged holding him or revealed his fate. But he is presumed to have died in jail. Others include Japan’s Chiune Sugihara, who as vice consul in Lithuania helped some 6,000 Jews escape Nazi occupation and enter Japan; Chinese diplomat Feng-Shan Ho, who defied his government’s orders and issued visas for Austrian Jews after the Nazi takeover; Giorgio Perlasca, an Italian diplomat, who gave fake passports to Hungarian Jews; and Britain’s Frank Foley, a secret service agent, who was credited with saving 10,000 Jews by allowing them to pass through passport control to reach safety without papers.

The April 19 ceremony at Adas Israel Congregation featured a full production of the oratorio “Aristides,” a piece about Sousa Mendes written by Neely Bruce. It also brought Sousa Mendes’s descendants together with the children of Jews who were saved thanks to his efforts. Many of the second generation survivors were not aware of the fact that their parents were able to leave Europe only due to visas that Sousa Mendes issued. Jane Friedman, a Washington journalist whose grandparents and uncle, Belgian Jews, were among those saved by the Portuguese diplomat, is now working with the Sousa Mendes Foundation to try and locate descendants of the 30,000 visa recipients. It is a slow process and so far only 3,000 have been found.

The Foundation’s next goal is to restore the Sousa Mendes family house in the village of Cabanas de Viriato in central Portugal and to turn it into a museum.

This would mark the final phase in rehabilitating Sousa Mendes’s legacy in Portugal. His work was first recognized by Israel’s Yad Vashem in 1966, when he was declared a “righteous among the nations” 12 years after his death. The U.S. Congress honored him in 1986. But back in Portugal the process was longer. Recovering from years of dictatorship, Portugal granted Sousa Mendes its highest medal of honor in 1987 and a year later the parliament restored his diplomatic rank and dismissed the charges against him.

Speaking at the ceremony at Adas Israel, Portugal’s ambassador to Washington, Nuno Brito, said that after decades of silence, the Portuguese people now cherish Sousa

Mendes’s achievement. Brito also noted his country’s recent decision to allow descendants of Portuguese Jews to reclaim their citizenship. “It’s never too late to do the right thing,” Brito said.

“As he put it — he couldn’t have acted differently,” Gerald Mendes said of his grandfather. “He had to save these people. The human side sometimes is more important than the laws.”

This Portuguese Diplomat Was Disgraced For Saving Jews. Now, He’s Getting His Due.