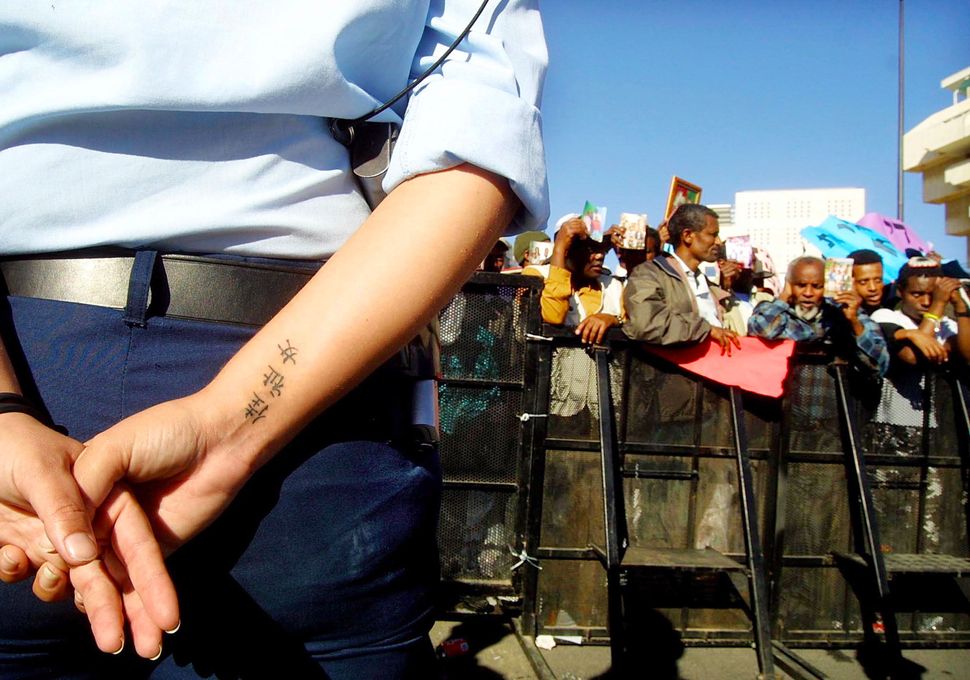 Hundreds of Ethiopian-Israelis are now protesting in front of Israel’s national police headquarters in Jerusalem, following the surfacing of showing two police officers, one of whom was a volunteer, punching and tackling an Ethiopian-Israeli male soldier—while in his army uniform—for no apparent reason.

The protesters have blocked a section of route 1 in the capital, and are carrying signs that read: “Hit me I’m black,” and “Racist Police.”

“This latest incident of violence against the Ethiopian soldier that went public on Sunday was the trigger for this protest,” said Orit Sahavat, an organizer of the protest, according to the Israeli news site Walla.

“I’m certain that my forefathers didn’t know that this would happen when they’d immigrate to the Land of Israel,” she added. In the video, the soldier, identified only by the initial D., is seen talking on his cell phone and nonchalantly leaning on his bicycle when the officer approaches and begins to push him. The violence rapidly escalates as the police volunteer joins in the melee and the two wrestle the soldier to the ground, with fists flying.

Chief of Police Yohanan Danino announced on Tuesday that the officers were immediately suspended and would be fired following an official hearing.

“This is a serious incident by any measure,” Danino said. “There is no place for officers like this in the Israeli Police Force.”

Danino met with representatives of the Ethiopian-Israeli community today and announced the formation of a joint police task force, which will include community membership, to address their concerns.

“We cannot be satisfied with shock and declarations,” Rivlin said. “These incidents must serve as a warning sign and an opportunity for deep and fundamental introspection with respect to the relationship between law enforcement agencies and diverse segments of Israeli society.”

The events in Jerusalem are unfolding with what some might see as uncanny resemblance to ongoing tensions across the U.S. between the police forces and members of the African-American community. Mass demonstrations and riots have shaken Baltimore this week following the death of Freddie Gray, a black man, in police custody. There, too, much attention has been paid to a video capturing the arrest. Similarly, disturbing videos of the deaths of Walter Scott and Eric Garner in recent months at the hands of police have sparked nationwide protest against police brutality toward minorities.

“Something is rotten at the core,” Micky Damro, a protester in Jerusalem, told Walla, saying that he felt it was important to journey to the capital from up north to take part in the demonstration.