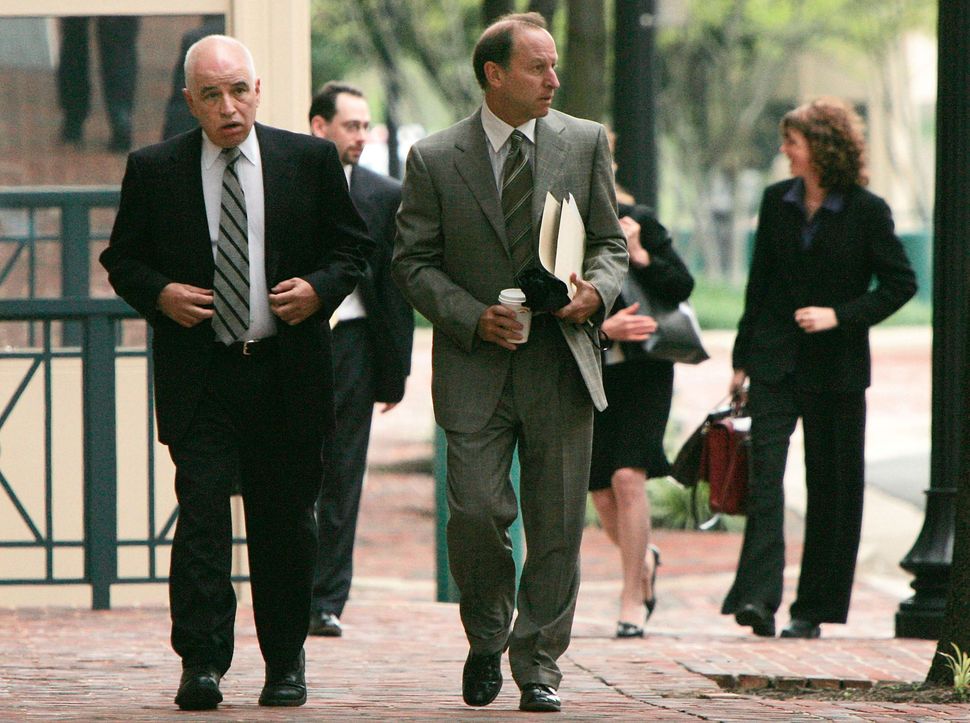 For the Defense: Abbe Lowell (right) accompanies ex-AIPAC official Steven Rosen from the courtroom in 2005. Image by Getty Images

But in recent years the Jewish white-collar criminal defense attorney has taken on an anti-establishment cause. In courts of law and in the court of public opinion, Lowell is raising alarms against the government’s growing use of secrecy and espionage claims to shield itself from would-be whistleblowers and challengers.

It is a mission that has, depending on the circumstances, found him both defending and opposing those advocating for Israel-related causes. But these cases are proving to be among his toughest challenges, notwithstanding his impressive record of winning cases.

Lowell was reminded of this most recently on March 25, when a federal judge threw his client’s defamation suit out of court on the grounds that litigating it would expose secret government information.

The New York court’s action provoked widespread notice in the broader legal community because, for the first time, the defendant let off the hook was not a government agency or a contractor that deals with classified government information. It was, instead, a private not-for-profit group that listed no business with the government on its tax returns. The group, United Against Nuclear Iran, has worked closely with Jewish groups, including The Israel Project, the Jewish Community Relations Council of New York and the Conference of Presidents of Major American Jewish Organizations.

What kind of information is involved? How did it get to the hands of the advocacy group? And which government agency was behind the request to dismiss the lawsuit? All these questions remained unanswered. Lowell and his client were kept in the dark, at the request of an unknown government agency that presented the judge with arguments that they were never allowed to see.

“It doesn’t make sense, it has never made sense,” Lowell said in an April 14 interview. “There’s something about this that everybody with a brain believes to be odd, unusual, strange.”

Lowell believes, and many legal experts agree, that the Restis case has taken the idea of government secrecy to a new level. But it is not an isolated case. Lowell himself has been involved in two others. His major foray into espionage law involved a high profile 2004 federal prosecution against two lobbyists that roiled the pro-Israel community. Though neither worked for the government, the government indicted Steve Rosen, a top official for the American Israel Public Affairs Committee, and his colleague Keith Weissman, under the Espionage Act of 1917. The two were accused of disclosing secret government information about Israel that they had received from a Pentagon official.

Lowell took on the Espionage Act once again in 2010 when he represented Stephen Kim, a State Department contractor accused of leaking classified information to Fox News reporter James Rosen about a plan by North Korea to conduct a nuclear test. Though a journalist, Rosen (no relation to Steve Rosen) was named as an unindicted “co-conspirator” for reporting the information as part of his job. Kim eventually entered a plea agreement and was sentenced to 13 months in prison.

Lowell described the government’s use of the Espionage Act in Kim’s case as an attempt to “stretch the law” to deter future leakers.

In the Steve Rosen case, Lowell found himself spending hours in a secured court location reviewing classified information and arguing in special pre-trial procedures for permission to use this information in court to defend his client. For a long time, he didn’t know when or if he would be paid. Less than a year into the case, AIPAC, which had hired Lowell to defend Rosen, fired both Rosen and Weissman under pressure from the Justice Department, and stopped paying the two men’s defense lawyers. 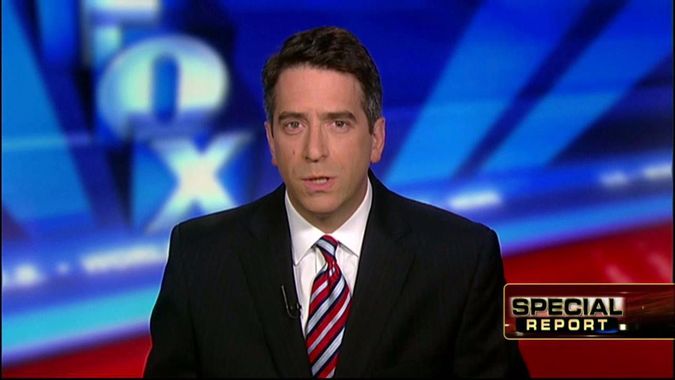 “I know as many lawyer jokes as anyone,” said Rosen, “but Abbe worked on my case for years without knowing if he’d ever get paid and he never slowed down and never caved in.” In part due to Lowell’s insistence on the importance of presenting some of the classified information in question to defend his client, Attorney General Eric Holder eventually decided to drop the case. In a compromise on the legal fees, AIPAC ultimately agreed to pay the two men’s lawyers more than $4 million.

In the most recent lawsuit, involving UANI, Lowell’s client, Restis, sought to sue the private advocacy organization, whose declared mission is to block Iran from developing a nuclear weapon. Restis claimed that UANI had defamed him by wrongly naming his company as one that does business with Iran. The case drew public attention when the U.S. government intervened and asked the court to drop the case, invoking the state secrets privilege.

Back when the government formally invoked this privilege for the first time, in 1953, it was to exclude specific pieces of evidence from a case when that evidence involved classified information that the government asserted could seriously damage national security. In allowing this, the Supreme Court warned that the privilege “was not to be lightly invoked.”

But when the information in question in the 1953 case, United States v. Reynolds, was declassified in 2000, it was revealed to not contain anything classified. It did, however, contain information damaging to the government’s case. In this and most other such cases, federal judges accept the government’s state secrets privilege without independently examining the evidence in question.

Since the World Trade Center attack in September 2001, the government has invoked the state secrets privilege with increasing frequency, asking courts in at least nine cases to block disclosure of specific pieces of evidence. Moreover, it has begun invoking the privilege to rule out whole cases.

One such case was that of Maher Arar, a dual Syrian-Canadian citizen and longtime resident of Canada. Arar was imprisoned by the United States at John F. Kennedy Airport on his way home from a family vacation on suspicion of being a member of Al Qaeda. The United States then deported him not to Canada, where he lived, but to Syria, where security officials held him and tortured him for nearly a year. At American government urging, Canadian officials did not protest.

In 2010, Canadian Prime Minister Stephen Harper formally apologized to Arar after an investigative commission cleared him of any terrorist suspicions. In an out-of-court settlement, Harper’s government gave Arar $10.5 million in Canadian dollars (worth about $8.5 million in U.S. dollars today) to compensate him for his suffering. But when Arar filed suit against the U.S. government, the Obama administration told an American court that his case could not be tried without damaging U.S. security.

In the UANI case, while no explanation was given for the government’s request, it is widely believed that the CIA was behind it. Observers have speculated that the move aimed to protect classified intelligence information regarding Iran’s nuclear program that Israel shared with the United States and that somehow reached UANI. Lowell, who holds a security clearance that allows him to view classified material, was denied access to any information regarding the case.

Steven Aftergood, who heads the project on government secrecy at the Federation of American Scientists, said that the Obama administration had not followed through with a 2009 pledge to limit the use of the state secrets privilege. At the same time, the administration has prosecuted eight cases charging leaders with violation of the Espionage Act, compared to only three cases in all previous administrations. “The courts have become a venue for fighting national security cases more than in the past,” said Aftergood. Lowell, who is a supporter of Israel and an active member of the Jewish community, said taking on a pro-Israel organization such as UANI did not pose a problem for him. ”In the name of doing something good people can behave very badly and in the end we erode the support and the protection to our values, including our support for Israel, if we allow the ends to justify your means,” he said.

Lowell explained that he is attracted to cases involving secrecy and espionage allegations not only because of the legal challenge they pose, but also because of his quest, as a lawyer, to check the government’s power. “It’s what makes the American justice system so good and so important, that an individual can fight the enormous power of the government in a very public way.” The individuals involved in these cases, Lowell added, “deserve to have the most forceful presentation of their positions because they’re always going against something that on paper is more powerful than they are, in this case the U.S. government.”

Jewish values also played a role in choosing to take on these cases even though at times his mission pits him against pro-Israel institutions. “I have a fundamental view that in the core of all of Judaic law is the notion of what we would call basic equal protection and fairness,” Lowell said.

In representing Restis, Lowell said he was also adhering to Jewish values by fighting “offensive” claims that his client, a son of a Holocaust survivor, was trying to aid a nation aiming to destroy Israel.

“I believe that there are too many secrets and too much classified information and the more that we probe it the more transparent the government is, the safer we are,” Lowell said. Contact Nathan Guttman at guttman@forward.com or on Twitter @nathanguttman