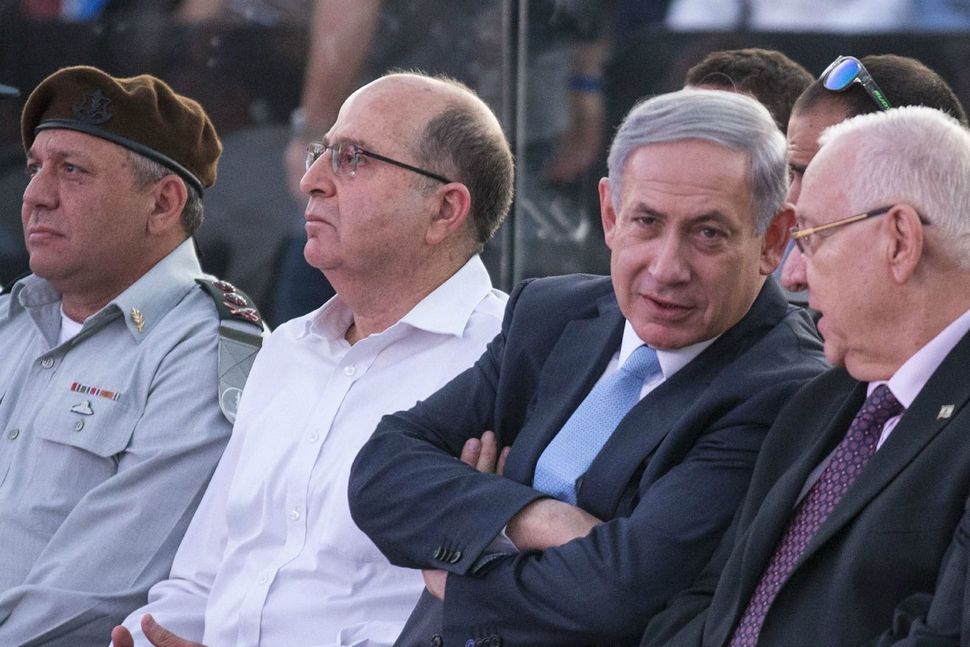 Benjamin Netanyahu’s new government is just starting to take shape and has yet to present a platform or guidelines. Even the ministerial portfolios are not all divvied out yet; members of Netanyahu’s Likud party are still anxiously waiting to hear what posts their leader has left for them after signing generous deals with his coalition partners.

But pending the full presentation of Netanyahu’s government next week, here are some of the key players in the new cabinet worth keeping an eye on and some of the key issues that will shape Israel’s next four years.

At 39, Shaked is the wunderkind of Israel’s right wing. Young, secular, and well-versed in Tel-Avivian speak, Shaked, who will serve as justice minister, is poised to open the floodgates on a series of legislative initiatives widely considered to infringe on Israel’s democracy and free speech. These bills include a move to restrict the work of not-for-profit organizations that receive donations from foreign governments or overseas political entities. According to the initiative led by Shaked, any such donation would require advance approval by the ministers of defense and of foreign affairs.

The goal of the bill is to cut the lifeline of many left wing and civil rights organizations that rely heavily on European funding. She is also expected to allow reintroduction of the controversial nation-state bill, which declares that Israel is the nation-state of the Jewish people. Many experts have warned this legislation would downgrade Israel’s Arabs to second-class citizens. Shaked does not control legislation initiatives born in the Knesset, but as justice minister she will head the powerful ministerial committee on legislation which is tasked with deciding which bills get the government’s support. Her predecessor, Tzipi Livni, fought tooth and nail to block the nation-state bill and the legislation on non-governmental organizations at the ministerial committee. Shaked is expected to enthusiastically support them.

Shaked will have great influence over the judiciary system

While legislative moves initiated or supported by Shaked could shape Israel’s democracy, her impact as Justice minister on Israel’s judiciary system could have a much longer effect. As chair of the committee in charge of appointing judges, Shaked will be the key voice in the selection and approval process of new judges for the Supreme Court and lower courts.

It is a goal Shaked has had her eyes on for some time. A vocal critic of Israel’s supreme court and what she views as its overreaching activist approach, Shaked will preside over the committee during a four year period in which 4 of the current members are expected to retire and will need to be replaced. She is also expected to push forward a move to change the makeup of the committee, giving more votes to politicians when choosing Israel’s top justices.

Another bill Shaked will advance as justice minister will allow the Knesset to overrule the Supreme Court by re-legislating bills the court strikes down as violating Israel’s Basic Laws, its de facto constitution.

While Shaked’s control over the justice ministry could infringe on the judiciary’s independence, it’s worth bearing in mind that all legislative moves will still require approval of the cabinet and the Knesset. In the past, both have proven to be cautious with measures seen as blatantly challenging the Supreme Court.

Bennett, leader of the Jewish Home party, will serve as minister of education and diaspora affairs in the new Netanyahu government.

On its face, the post given to Bennett is a disappointing position for the leader of the Jewish Home party, one of Netanyahu’s main coalition partners, not to mention his perceived status as the main representative of the West Bank settler community in the Knesset. Bennett set his eyes on the defense or foreign ministries, but his party’s relative weak showing on election day forced him to settle for less.

Still, even as education minister, Bennett will have a key voice on issues relating to the Israeli-Palestinian peace process; especially since he has also been promised a seat on Netanyahu’s inner-cabinet, which is in charge of defense issues. From these perches, Bennett will continue trying to advance his idea of annexing more than 60% of the occupied West Bank to Israel — the section known as Area C. While unlikely to achieve this goal, Bennett is well positioned to block any initiatives for a freeze on Israeli Jewish settlements in the occupied territories and any moves leading back to the negotiation table to discuss a two-state solution with the Palestinians. In a tight coalition of only 61 members, Bennett can easily threaten to resign and force Netanyahu into new elections if the prime minister tries to move ahead with the peace process.

Meanwhile, as next minister of education, Bennett has already secured funds for the Ariel university, located in the West Bank, and for providing armor for public buses used by settlers. His party member Uri Ariel, who will serve as minister of agriculture, will also be in charge of the World Zionist Organization’s Settlement Division, which controls millions of shekels used primarily in West Bank Jewish settlements.

The decision by Avigdor Lieberman, head of the Yisrael Beiteinu (Israel Our Home) party, to resign from his post as foreign minister and to take his party out of Netanyahu’s new coalition has left the foreign ministry with no leader. This could have provided the prime minister with a unique opportunity to appoint someone less controversial as Israel’s top diplomat.

But as of now, Netanyahu intends to keep the position vacant. He will serve formally as foreign minister and will appoint a deputy minister from the Likud as caretaker until a full time foreign minister is appointed.

Why is Bibi keeping such a coveted seat empty?

Likud sources explained that Netanyahu is saving the foreign ministry for a “future partner” in his coalition, one that may join in later on, probably after the first crisis with Bennett. This future partner could be either Isaac Herzog and his left-oriented Zionist Union party, or Yair Lapid from Yesh Atid, a centrist party with a strong secularist agenda. Either of these parties could step in if Bennett drops out (perhaps following Netanyahu giving in to U.S. pressure to resume peace talks). Such an addition could give the government a much more centrist color. Herzog would be an ideal foreign minister for Bibi, helping him show to the world the government’s moderate face. Lapid, who is also a moderate, though less committed to the peace process than Herzog, could also suit Netanyahu as the government’s centrist fig leaf.

Kahlon, head of the newly minted Kulanu list, ran his entire campaign on the promise that he’d become Israel’s next finance minister and, from there, reform Israel’s economy, He vowed in particular to provide relief to the country’s beleaguered middle class.

Netanyahu quickly agreed to Kahlon’s portfolio request, and even threw in responsibility over the Israel Land Authority, an agency crucial for any reform in the housing market.

Now it’s Kahlon’s time to deliver. If his tenure as finance minister resembles in any way his term as minister of communications, when he dramatically cut Israel’s cell phone prices and won huge popular support, Kahlon could be in a position to challenge Netanyahu next time around.

But if, as his predecessor Yair Lapid, Kahlon fails to show Israelis that they are benefiting from the country’s economic boom, his political career could be doomed. This is a massive challenge, given not only the difficulty in restructuring Israel’s economy, but also the active role Netanyahu and his fellow Likud ministers will likely play in making sure Kahlon doesn’t become too popular and overshadow his boss.

Deri, now back as head of Shas, an ultra-Orthodox Sephardic party, is on a route to rehabilitation. The former interior minister and political kingmaker was charged with taking bribes while in office and sentenced in 2000 to a three-year prison term, of which he served less than two years.

In the elections in March, with Deri again back heading the faction, Shas won seven seats. This was a big dip compared to its 11 seats before, but still a stronger showing than many expected. Moreover, he saw his archrival Eli Yishai, who broke off from Shas, crash his rump faction into the ground.

But Deri had also learned a lesson in humility.

His key ask during the coalition negotiations was to return to the interior ministry. But allowing a convicted felon to go back to the crime scene was a bit too much for the Israeli public. Sensing this popular disapproval, Deri stepped back and agreed to take a new portfolio which combines the ministry of economy and the ministry in charge of developing the Negev and Galilee regions.

Despite the disappointment, Deri has much to benefit from this combined portfolio. Many of Shas’s constituents live in Israel’s periphery, and with control over funds for the Negev and Galilee, Deri could use his office to strengthen the party.

With another Shas member, Yaakov Margi, expected to become the minister of religious affairs, the party under Deri’s leadership will focus on regaining power on issues of importance to its voters after two long years in the opposition.

United Torah Judaism, an Ashkenazi-Haredi party, has traditionally refused to accept cabinet positions due to its opposition to a secular Zionist state. Instead, its members join the cabinet as deputy ministers, taking a portfolio of importance to their community but not sharing the broader responsibilities of the government.

Yaakov Litzman, who was born in Europe and grew up in Brooklyn before moving to Israel, is a member of the Ger Hasidic sect and entered politics at the order of the Gers’ grand rabbi.

True to his party’s rules, Litzman became in 2009 deputy minister of health, but had de-facto control of the ministry since there was no full- time minister of health. The surprise was his performance then. Many expected a Haredi minister to focus only on the needs of his community. Litzman instituted free dental care for all Israeli children and began a major reform in extended senior care which aimed to cover many of the costs that currently burden families across the country. Now back in the health ministry after sitting in the opposition during Netanyahu’s previous government, Litzman has vowed to pick up from where he left off. He credited his success to the fact that in contrast to non-Haredi politicians, he does not have to appoint party members or curry favor to activists. “I have no primaries,” he explained.