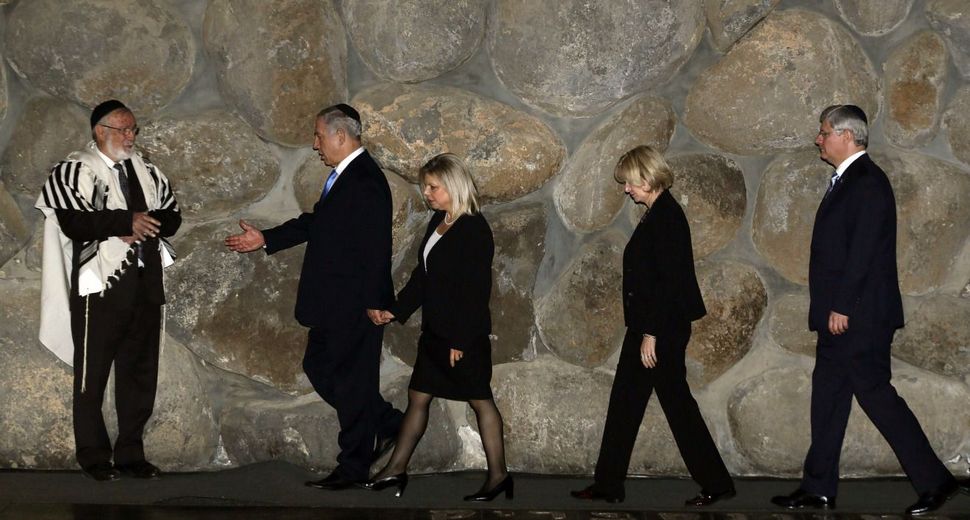 Canada’s looming election is a contest about many things on the country’s agenda, but for the Canadian Jewish community, one aspect is leaping into sharp relief.

Israeli Prime Minister Benjamin Netanyahu’s fiercest supporter among world leaders, Stephen Harper, is facing off against Justin Trudeau, a liberal (and large-L Liberal) with a renowned family name and a more traditional, less ideological support for Israel that does not necessarily rally around all its policies under Netanyahu’s rule.

In the run-up to the federal election in October, Harper, leader of Canada’s Conservative Party, who became prime minister in 2006, is playing up his unstinting support for Netanyahu as he attempts to hold, or even increase, his Jewish base while fending off Trudeau’s vigorous challenge.

“For the majority of Canadian Jews, [Harper’s] unquestioning support for the policies of the Israeli government is the most important reason why they support the Conservative government,” said Frank Bialystok, a professor of Jewish history at the University of Toronto.

In the United States, it’s a trend that Jewish Republicans can only wish for. In fact, the impact of Harper’s approach on Canada’s historically liberal-leaning Jewish community has been conspicuous since the 2011 election, when his Conservative Party took 52% of the Jewish vote — a major breakthrough, given the community’s traditional attachment to Canada’s Liberal Party, led during the 1980s by former prime minister Pierre Elliott Trudeau, Justin Trudeau’s late father.

Though Canada’s 380,000 Jews make up a small portion of the country’s electorate, the result was a satisfying achievement for Harper, who marched in lockstep with Likud-led Israel even before his 2011 triumph. 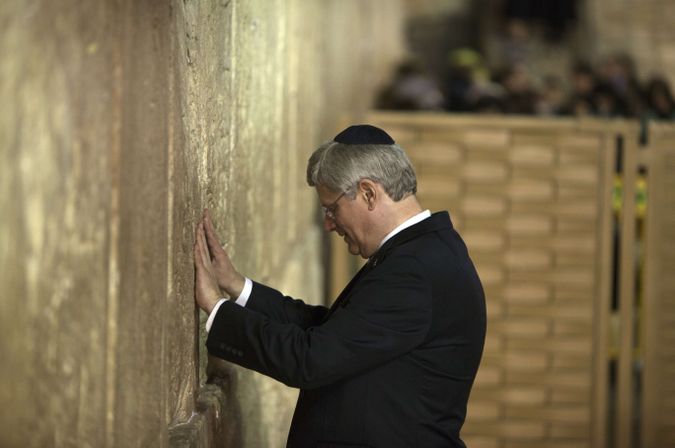 Since then, Harper made a high-profile visit to the Jewish state in January 2014 and unwaveringly defended Israel against human rights critics during last summer’s offensive against Hamas in Gaza, with its high civilian casualties. He has emerged as one of Netanyahu’s few close confidants among foreign leaders.

More recently, an aide to Harper’s cabinet minister for security matters suggested that his government was prepared to go further still. According to a May 11 CBC News report, the government may be planning to use the criminal code’s hate law provisions against groups that promote the campaign to boycott, divest from or sanction Israel, a movement otherwise known as BDS. Such a move could target groups as diverse as labor unions, student protesters at universities and The United Church of Canada, the country’s largest Protestant denomination, which has endorsed a boycott of products from exclusively Jewish settlements established by Israel in the occupied West Bank.

“I can tell you that Canada has one of the most comprehensive sets of laws against hate crime anywhere in the world,” an aide to Public Safety Minister Steven Blaney told the state-sponsored network when asked how the government meant to enforce its vows of “zero tolerance” of BDS. The aide, Josee Sirois, noted that Canada’s laws criminalizing the promotion of hatred against ethnic, religious and racial groups had recently been expanded to include groups assailed on the basis of “national origin.”

No polling data on Jewish voters are publicly available between elections, so it’s difficult to know if Harper has added to his Jewish support through such rhetoric. But given the super-tight state of the race at this stage, those votes could make a difference. An EKOS poll published on May 8 showed Conservatives with 30.3% of the overall vote versus 29.6% for the Liberals — a virtual tie.

For the Conservatives, that is a positive trend. A year earlier, the Liberals held a commanding 10-point lead.

Harper has gained ground since then by projecting an image of decisive leadership amid recently increased fears of Middle East-related terrorism in Canada.

Last November, Harper deployed F-18 warplanes and 67 military advisers to Iraq as Canada’s contribution to the U.S. led coalition against the violent faction there known as the Islamic State. Shortly afterward, Canadian “lone wolves” inspired by that radical movement carried out separate terrorist acts, including an attack on Parliament.

In March, two Middle Eastern immigrants were convicted in a Toronto court of plotting to blow up a Toronto to New York train service. The court heard recordings made by an undercover FBI agent in which the conspirators discussed plans to shoot Canadian Jews.

Harper has responded to the domestic jihadist threat with legislation that gives law enforcement authorities greater powers to undertake counter-terrorist actions, even at the expense of civil liberties. The new law, among other things, doubles the length of time that terrorist suspects can be detained without charge. Upon obtaining a judge’s warrant, the security service is also empowered to undertake counter-terrorism actions even if they violate Canada’s Charter of Rights and Freedoms, which is comparable to the U.S. Bill of Rights.

“The anti-terrorism bill is taken very seriously by the Jewish community in particular, because we have been targets,” said Michael Mostyn, CEO of B’nai Brith Canada.

“The Jewish community is an at-risk community,” echoed David Cape, chair of the Centre for Israel and Jewish Affairs, on the lobby group’s website.

Trudeau appeared unsure on these issues. He opposed the military deployment against the Islamic State in Iraq, a deployment that most Canadians support, according to polls on the issue. He criticized the anti-terrorist bill, but in an apparent tactical move he had his party vote for it in Parliament rather than appear soft on terror.

Despite the Conservatives’ success in pulling even with the Liberals in the polls, Trudeau does have some advantages. He is personally much more popular than the prime minister. Harper suffers from a stolid, ideologue image and carries the baggage of 10 years in power.

Trudeau, in contrast, is a fresh face who seems to genuinely like people. His platform calls for tax relief for the middle class in contrast to the Conservatives’ recent budget measures, which favor wealthier Canadians.

Trudeau also carries the most iconic name in Canadian politics. He taps into the legacy of his late father, who is venerated as a nation builder for having created the Charter of Rights and Freedoms and for defeating the challenge of Quebec separatism in the 1980s.

Canadian Jews were among the elder Trudeau’s strongest supporters for these reasons, as well as for his unprecedented elevation of Jews to prominent posts. Pierre Trudeau appointed the first Jews to be, respectively, a chief justice of the Supreme Court, a Cabinet minister and a Canadian ambassador to the United States.

Harper has appointed Jews, too. He named Joe Oliver, a Toronto Member of Parliament, as Canada’s first Jewish finance minister. His other Jewish appointments have included a Supreme Court justice and the first Jewish career diplomat to serve as Canada’s ambassador to Israel.

“Justin Trudeau values the kind of policies his father innovated – multiculturalism, a safe haven for refugees, peacekeeping,” said Karen Mock, a retired human rights educator and former Liberal candidate in Toronto. “He is a product of that legacy, and many Jews have long memories for that.”

Trudeau is also not burdened with the anti-Israel image of Michael Ignatieff, his predecessor as Liberal Party leader. Ignatieff led his faction to a crushing defeat in the 2011 election. A human rights scholar, he never recovered in the Jewish community after describing Israel’s bombing of Lebanese civilians in the 2006 conflict with Hezbollah as “war crimes.”

Trudeau has tried hard not to let Harper make Israel a wedge issue. During last summer’s war in Gaza, the Liberal Party’s foreign affairs spokesman issued a drab, even-handed news release on the conflict. The following day, Trudeau overrode him with a passionate endorsement of Israel’s right to self-defense.

“As more and more Jews become aware of how pro-Israel the Liberals are,” Mock said, “they could start voting according to other values and issues as well in our community, such as health, education, human rights and immigration.”