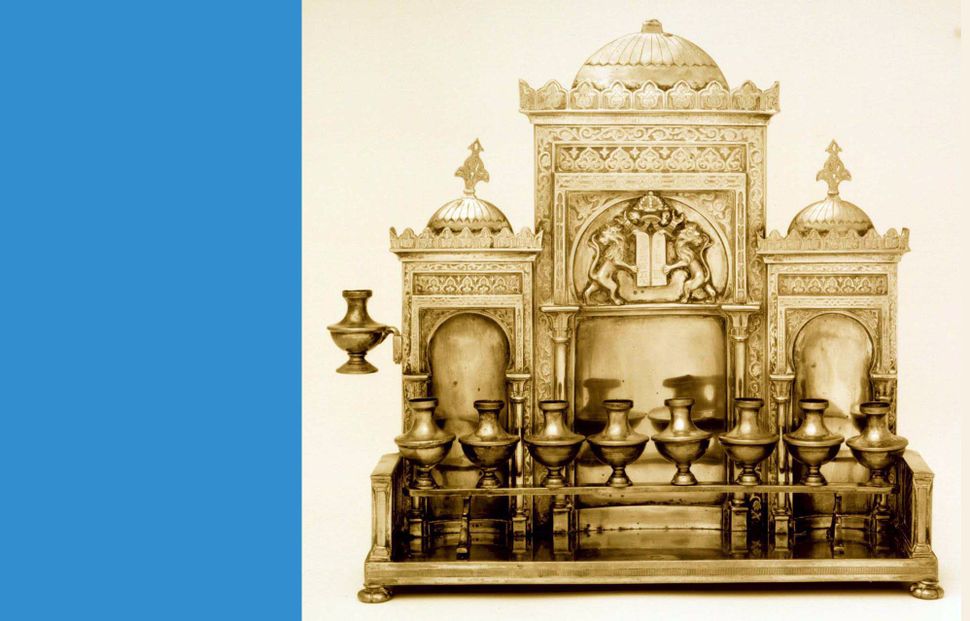 Cincinnati Bound: A late 19th Century brass menorah, probably made somewhere in the Austro-Hungarian empire, is part of the Klutznik Museum collection. Image by Courtesy of B'Nai Brith International

The saga of the B’nai B’rith Klutznick Museum’s confinement has finally come to an end. The esteemed Washington collection of more than 1,500 Jewish works spanning ancient to modern times was put into storage in 2002 — a victim of the fading fortunes of B’nai B’rith International, a former powerhouse of the American Jewish community that has fallen on hard times.

B’nai B’rith’s leaders promised for years to return the display to public view. They sought out funders and museum partners, insisting all the time that the museum remained open, even though the overwhelming majority of the collection spent 13 years boxed up in an art storage facility in suburban Maryland.

B’nai B’rith is billing the transfer of the entire collection to the Skirball Museum in Cincinnati as a “partnership.” But for all intents and purposes, it is a donation. The Klutznick collection is now the property of another Jewish institution.

The May 18 announcement was a bittersweet moment for the Jewish museum world.

The collection will be made available once again for scholars and the broader Jewish community to enjoy. But its new home is 500 miles west of Washington, on the campus of the Hebrew Union College-Jewish Institute of Religion in Cincinnati.

The addition of the Klutznick items, including paintings, Torah binders, ceremonial documents, books and Sabbath lamps, will more than quadruple the size of the Skirball collection, about 400 pieces, to more than 1,800 pieces. This is at a museum that is open just three days a week during its busiest periods, a museum that attracts at most 5,000 visitors a year.

Ivy Barsky, CEO of Philadelphia’s National Museum of American Jewish History, said the transfer of the collection was “a great outcome” for the Jewish community.

“It’s going to be safely cared for and nurtured, and it’s going to be shared,” said Barsky, who pointed out that the move would finally make the entire collection available to scholars and the public as well as to other museums.

Barsky said that the Skirball Museum, unlike B’nai B’rith, has the staff capable of caring for and researching the materials. The staff will also be able to facilitate long- and short-term loans to other museums around the country.

Barsky said that her own institution, which attracts about 100,000 visitors per year, had conducted “some casual conversations” about acquiring the Klutznick collection in previous years. But she said the collection falls outside the mission of the Philadelphia museum, which focuses exclusively on American Jewish history.

Barsky expressed no remorse that the collection had gone to Cincinnati. Nor did she think that the Skirball’s low visitor numbers or that museum’s location off the tourist circuit was an issue. “I really think it’s about the care and preservation, the access to schools and other museums and organizations,” Barsky said.

The Klutznick collection is following a path taken by B’nai B’rith’s vast archives, which were also put into storage in 2002. Three years ago, B’nai B’rith transferred those archives to the Jacob Rader Marcus Center of the American Jewish Archives, also part of the HUC-JIR campus. 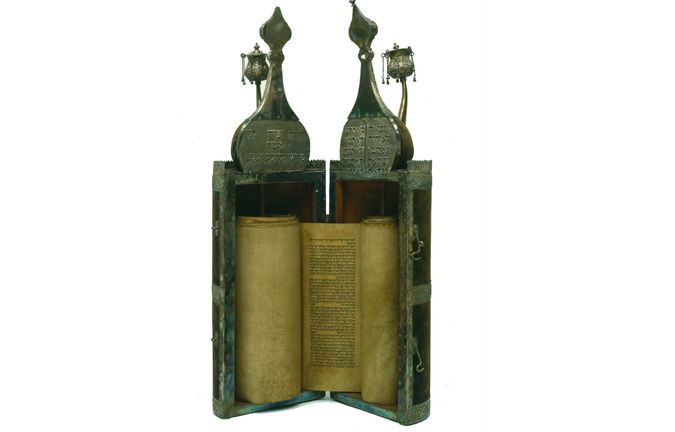 Museum Artifact: A deerskin Torah from India, from roughly the late 19th century Image by Courtesy of B'Nai Brith International

B’nai B’rith, which was founded in 1843 in New York City, was once a giant of the Jewish world. Its archives contain millions of documents from Jewish lodges across North America that shed light on important chapters in American Jewish history, particularly during the late 19th and early 20th centuries.

Abby Schwartz, director of the Skirball Museum, said that scholars at the American Jewish Archives would now be able to cross the HUC-JIR campus to view objects from the Klutznick collection too. Schwartz also envisages exhibitions that will combine items from the archive with items from the collection.

Staff at the Skirball Museum will spend the next few months unpacking, examining and documenting the collection, which runs the gamut from archaeological pieces to contemporary silverwork and baseball memorabilia. “This is really going to be a kid in the candy store experience to unpack these items and see them anew,” Schwartz said.

The Skirball plans to convert some of its rooms into dedicated galleries for the collection. It also aims to digitize the collection and make it available online.

B’nai B’rith’s Klutznick Museum was once a major institution attracting up to 100,000 visitors per year in Washington.

Beset by rapidly falling finances, B’nai B’rith had to sell its flagship building in 2002 and move into commercial office space. Most of the Klutznick collection was placed in storage. After the Forward highlighted the plight of Washington’s letter, the document’s owners moved it to Barsky’s museum in Philadelphia.

During the past decade, B’nai B’rith’s leaders have talked about establishing a new Jewish museum in Washington.

According to a B’nai B’rith press release, the Skirball Museum will display the collection “in designated galleries as the ‘B’nai B’rith Klutznick Collection.’”

Mariaschin brushed off concerns about B’nai B’rith’s finances. Between 2002 and 2013, the last year for which tax records are publicly available, the group’s net assets fell to negative $160,000 from $6.2 million. Mariaschin said the group should be judged not on its tax forms but on its programs, which include Israel advocacy and social welfare work.

Some museum professionals in Washington had hoped to keep the Klutznick collection in the city. During the period that B’nai B’rith sought a home for the collection, Ori Soltes, a former director of the Klutznick museum, led a campaign to establish a National Museum of the Jewish People in Washington.

Soltes left the Klutznick Museum under acrimonious circumstances in 1998. He blamed B’nai B’rith for running the museum into the ground.

B’nai B’rith rebuffed Soltes’s offer to accept the collection for his new museum.

Soltes suffered other setbacks, too.

He failed to find a financial backer for his project. And his bid to build a museum and hotel with Hyatt Hotels as part of a mixed-use redevelopment of the Old Post Office Pavilion on Pennsylvania Avenue lost out to a Donald Trump luxury hotel project.

Soltes said he was not surprised when he heard that the Klutznick collection was leaving Washington for Cincinnati. But he was deeply saddened. “The transfer of the collection represents an indictment of this community and a terrific loss for this community,” he said.

However, not all the Klutznick items are leaving the city.

The Skirball Museum agreed to loan Washington-linked items to the Jewish Historical Society of Greater Washington. These include a typewriter used by sports reporter Shirley Povich, and a sculpture of Povich created by Phillip Ratner.

The long-term loan is a boost to the historical society, whose Lillian and Albert Small Jewish Museum is set to expand with three additional gallery spaces expected to be complete in the next six years.

Apelbaum, who grew up in Washington, discovered an interest in Jewish communal life in general, and in Jewish history in particular, during childhood visits to the Klutznick Museum. “For me, that museum enriched my life,” Apelbaum said. “It was like my school of Jewish culture.”