Why Does No One Care About Jewish Heritage Month? 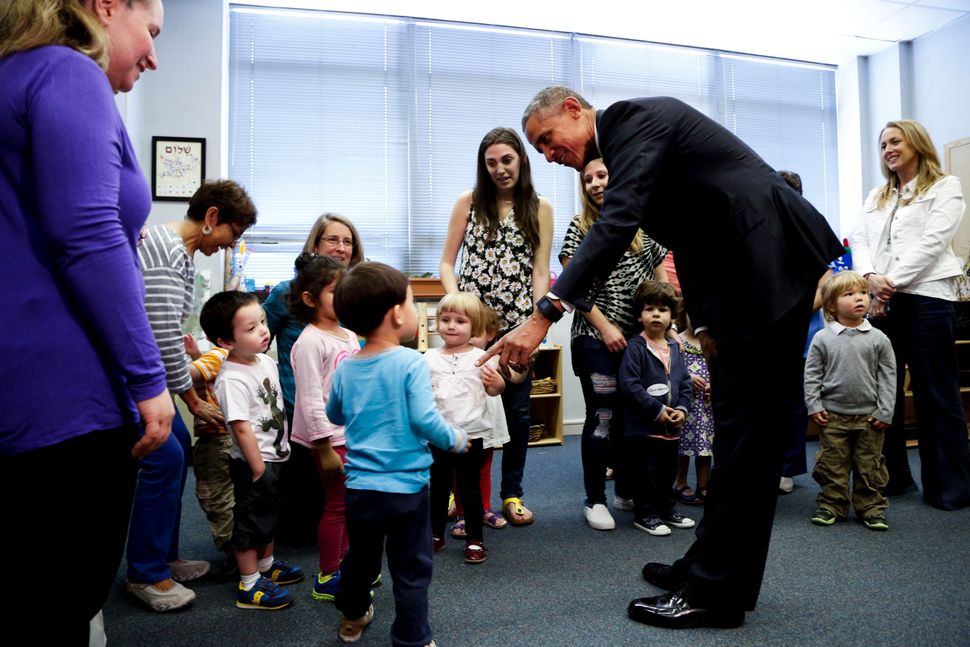 So how did you commemorate Jewish American Heritage Month this May?

If you didn’t — or if you didn’t even know such a month existed — you are in good company, that of the majority of American Jews.

But after nearly a decade of relative obscurity, Jewish American Heritage Month got national recognition this year when President Obama took a rare trip from the White House to Washington’s Adas Israel synagogue to deliver an address in honor of the month-long occasion on May 22.

JAMH organizers believe the event, which was intensively covered by national and international media, could boost the otherwise little-known celebration of American Jews and their contributions, and lift it from obscurity. But even for the month of May, they face some ruthless competition. May is also officially the month for celebrating Asian Pacific American heritage. It’s Older Americans month, too.

Still, JAHM proponents saw the Adas Israel event as a potential turning point. “In the first 10 years of Jewish American Heritage Month, a large part of what has been done was Jews talking to Jews about the contribution of other Jews,” said JAHM board chairman Greg Rosenbaum, a private equity investor who used to head America’s largest kosher poultry producer, “But in order for it to be a success, it needs to tell non-Jews the story of Jewish contribution to American society.”

JAHM may not stack up as one of the nation’s most visible ethnic commemoration months, but that doesn’t mean it has not been a lot of fun for Jewish communal figures attending events. It is what brought Obama to Adas Israel on May 22; it is the reason 250 Jewish activists crammed into a congressional hall two days earlier to mingle with lawmakers commemorating the event, and for several years, JAHM also gave the president an opportunity to throw an annual reception where the lucky couple hundred guests got a chance to rub elbows with Jewish luminaries such as Sandy Koufax, Ruth Bader Ginsburg and Barbara Walters.

Dedicating a month to a certain part of the population is the government’s way of making the group feel that its history, heritage and struggles are recognized by the nation.

The most well known of the 10 congressionally officially proclaimed months is clearly African-American History Month, which is marked each February in schools across the country, in TV specials and with a series of events. Other groups that can show an officially proclaimed month for their name include Latino-Americans, Italian-Americans and Indian-Americans, and there are also months dedicated to women’s history, disability awareness, and gay and lesbian pride.

“At best, ethnic heritage months increase awareness for a finite amount of time,” said Jason Low, a publisher focused on books promoting diversity who has written on the issue. “Once the month has ended, the very problem that the given heritage month was designed to address resets itself, and ‘those books’ are put away and ignored for another year.”

But William Daroff, senior vice president for public policy at the Jewish Federations of North America, believes that at least in the case of Jewish Americans, heritage month had an impact.

“Every year we’re a little bit better off in it being clear to the American public that we are an essential part of the mosaic that makes up America,” he said.

Daroff was among the Jewish leaders who brought JAHM to life a decade ago. The original idea was the brainchild of Representative Debbie Wasserman Schultz, a Florida Democrat. Alongside Senator Arlen Specter of Pennsylvania, Wasserman Schultz pushed for the legislation that marked May as the month for recognition of Jewish contributions. Daroff then reached out to President George W. Bush, who helped the legislation overcome its final hurdle by convincing Republican lawmakers to exempt Jewish American Heritage Month from a rule they passed limiting the number of officially mandated days. Similar resolutions were easily approved in the following years.

Bush proclaimed the first Jewish American Heritage Month the next year, in May 2006.

“There were no political considerations,” said Jeff Berkowitz, who was Bush’s liaison to the Jewish community at the time. He noted that Bush was not up for re-election and that his sole purpose was to make Jewish heritage commemoration “commensurate with a range of other heritages so recognized.” Politics is still considered out of bounds for JAHM, but it nevertheless slips in sometimes.

In a recent video message for JAHM, Wasserman Schultz noted that “like many American Jews… I found a natural home in the Democratic Party.”

Establishing May as Jewish American Heritage Month came on the heels of celebrations marking 350 years of Jewish America in 2005. But while the anniversary gained national attention, JAHM events usually went unnoticed.

This has to do, in part, with the lack of federal funding for the program. In its early years, JAHM received some federal grants. But when this funding dried up, the JAHM organization found itself relying solely on donations from the community. Events, mainly in scholarly settings, have since been funded by the organizations hosting them, with JAHM providing a framework for organizing meetings and publicizing events. One year, events got commercial sponsorship when Manischewitz thought it would be good for business to support events celebrating Jewish American history.

It was Obama’s decision in 2010 to host a first-ever Jewish American Heritage Month White House reception that added some glitz to the month. Obama’s receptions, which took place three years in a row, gave the president a chance to show that he cared about the Jewish community despite growing tensions with Israel. The receptions also emerged as a high point for Jewish communal officials, who routinely bombarded the White House liaison to the Jewish community with requests to be invited.

But the lack of funding put an end to this tradition as well. The 2013 sequestration forced the White House to cut tours and events, placing the JAHM reception on the chopping block alongside all other public events at the presidential residence. Later, even though money was once again flowing, receptions were replaced with smaller briefings and meetings at one of the White House office buildings.

Looking forward to future years of JAHM, Rosenbaum, who also chairs the National Jewish Democratic Council, believes the focus should be outward, working to educate non-Jewish Americans about the community’s contribution to the country, rather than to serve as a platform for internal celebrations. “Jewish American Heritage Month is a preventative measure against any case of anti-Jewish bigotry rearing its ugly head,” he said.

Brandeis University professor Jonathan Sarna, who has devoted much of his academic career to researching the role Jews played in American history, found that in most school textbooks, Jews are mentioned only once, “when they are murdered in the Holocaust. That’s all.” But Sarna also believes JAHM events still have a role to play in looking inward and educating the Jewish community “that American history is also their own history.”

“The conclusion is that it didn’t live up to the dream that some people had,” Sarna said, pointing mainly to funding issues that kept JAHM limited in scope, “but we’re better off having such a month than not having it.”

Why Does No One Care About Jewish Heritage Month?