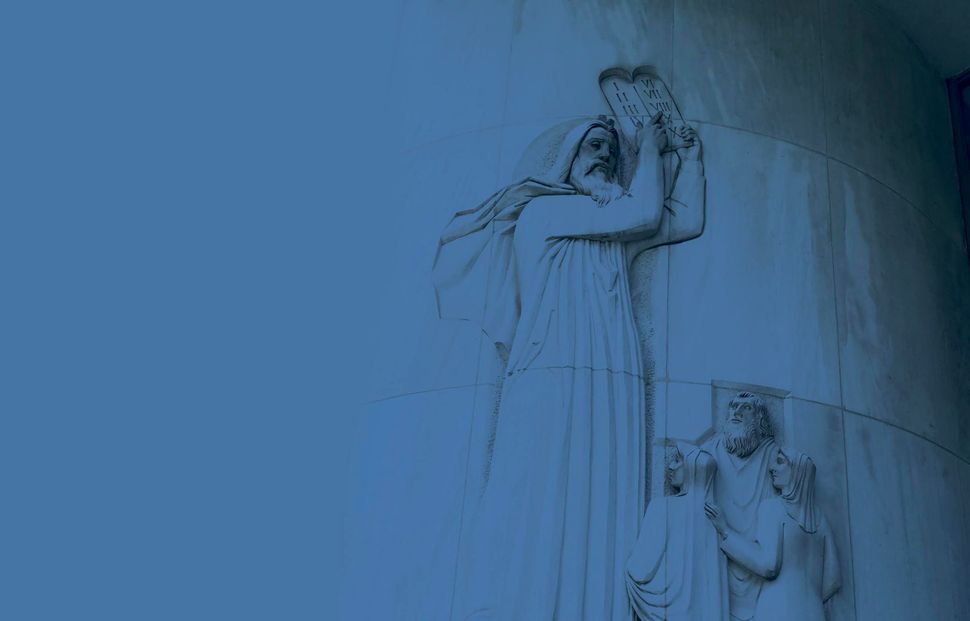 Moses at the Court House: Detail of the facade of the King's County Supreme Court, Brooklyn. Image by Anya Ulinich

In late December 2013, a prominent Brooklyn rabbi made an eye-popping ruling in his rabbinic court: The former chief financial officer of an Orthodox charity called Aish Hatorah New York owed the charity $20 million that he had allegedly stolen.

What followed the ruling was legal pandemonium, in the form of a year and a half of battles that moved into the secular court system. In the meantime, in December 2014, Brooklyn’s district attorney filed criminal charges against Fetman, alleging that he had embezzled funds from the charity — though the DA charged that he had taken $236,000; a significant sum, to be sure, but a mere fraction of the rabbinic court’s ruling. Fetman has pleaded not guilty to this criminal charge.

The Fetman case, and the massive award at issue, highlight the complexities that can emerge at the intersection of secular and religious court systems. In New York and elsewhere in the United States, rabbinical courts act as legal arbitrators, resolving commercial disputes using ancient codes of Jewish law, and then having those rulings enforced in civil court.

“Most of the cases go under the nonreligious radar, because they do go smoothly,” said Steven Resnicoff, a professor at the DePaul University College of Law. “I think the system works better than you’d think.”

The Aish suit, however, stands out for the size of the judgment the rabbinic court awarded to the charity. By way of comparison, it was a $20 million shortfall that precipitated the collapse of FEGS, a charity with an annual budget roughly 75 times as large as that of Aish Hatorah New York. The fraud perpetrated against the Metropolitan Council on Jewish Poverty over the course of 20 years netted just $9 million, according to prosecutors. Yaakov Weingarten, who pleaded guilty to raising money for a network of fake Jewish not-for-profit organizations in 2014, was required to pay back just $522,000 under the terms of a criminal penalty.

Though best known for overseeing religious divorces, Jewish rabbinical courts often handle complex litigation between Orthodox parties, for whom complaining to civil authorities without first seeking rabbinic intervention can be seen as a breach of religious law.

The decisions of rabbinical courts, like those of any arbitrator, are difficult to amend or reverse in civil courts. In New York, state law allows arbitration awards to be overturned only in cases of corruption, fraud or partiality by the arbitrator, among a handful of other narrow reasons.

Aish Hatorah New York is not Aish International, the massive Orthodox outreach organization with ties to controversial anti-Muslim films, but a smaller New York-based affiliate that reaches out to college students in New York and Pennsylvania. A relatively modest operation, the organization reported total expenses of $5.9 million in 2013.

In documents filed in the civil suit stemming from Aish Hatorah New York’s effort to enforce the rabbinical court’s judgment, the group’s executive director, Rabbi Yitz Greenman, said that he stumbled upon Fetman’s alleged embezzlement almost by accident. In the fall of 2013, Greenman claimed, he learned that Fetman had renewed the charity’s lease on its office space without his permission. Greenman claimed that further conversations revealed that Fetman had been making “unauthorized loans” from the charity, and so he brought Fetman before a rabbinical court.

According to Greenman’s affidavit, it was in the first session at the rabbinical court that Fetman “admitted to creating and controlling bank accounts in the name of Aish, which were not accounted for in any of our financial records.” Fetman has denied making any such admission.

A forensic accountant hired by Aish reported to the rabbinical court that Fetman had “stolen” up to $2.4 million, according to the rabbi’s written decision in the case. Since the forensic accountant examined only a portion of the charity’s records for the 17 years during which Fetman was the group’s CFO, the rabbi determined that it was “likely” that “approximately $20,000,000 was stolen from Aish Hatorah over the years.”

In an affidavit, Greenman further expanded on the rationale for the judgment, writing: “The final Award amount of $20,000,000 was based on the limited information we had in our possession which was presented at the Arbitration, which showed at least $2.4 million being stolen or diverted from Aish accounts… together with approximately $2.5 million in unauthorized and unverified credit card expenditures.” In addition, Greenman wrote: “The Arbitrator drew negative inferences against Respondent for his failure to produce documents… together with his failure, under Jewish Law, to account for the legal means with which he claims to have amassed his unexplained net worth….”

In late December 2013, Aish Hatorah filed in New York State Supreme Court in Brooklyn to enforce the rabbi’s judgment. A judge ruled largely in the charity’s favor in September 2014, upping the judgment to $21.4 million to include interest. Fetman’s attorneys immediately said that they intended to appeal the ruling; those papers are due in late June. In the meantime, the two sides have continued to fight before the original civil court judge, as Fetman’s lawyers have petitioned her to rehear the case. Decisions on at least one of those petitions are still pending.

Fetman’s lawyers have picked at nearly every aspect of the rabbinical court’s proceedings. In a March affirmation by Fetman’s current attorney, Joseph Zelmanovitz, the attorney charges that the rabbi had no basis for the $20 million award and had spoken disparagingly about Fetman. A response by Aish’s lawyers calls Zelmanovitz’s affirmation “the definition of frivolous” and disputes his claims.

More recently, the sides have tangled over a document prepared by the forensic accountant. Zelmanovitz, in a letter to the court, charged that it contained errors, and that the $20 million judgment was consequently in error. Aish’s attorney, Robert Rimberg, responded with a letter contending, among other things, that this argument was, in effect, being made far too late. “Fetman cannot now come — over a year and a half after the Award and its subsequent confirmation — and claim that the forensic accountant’s figures were incorrect,” Rimberg wrote.

This wrangling is of the sort that might be expected in the aftermath of any major court ruling. Yet it exists in the context of the deference that civil courts give to religious courts in particular, and arbitrators in general. “Arbitrators of all different types, not just Jewish [religious court] arbitrators, can reach decisions that, at first glance, they may seem odd,” Resnicoff said. “But when you have more information, they fit into place.”