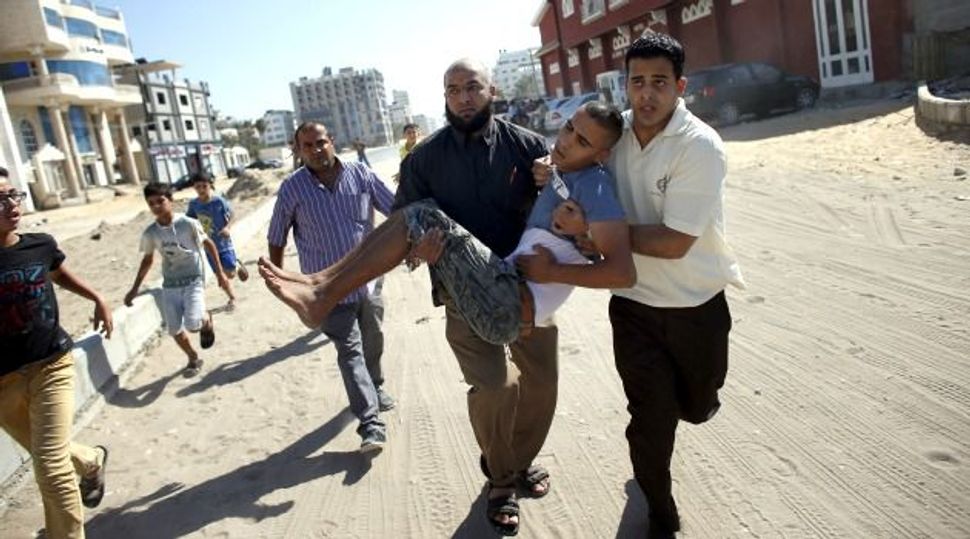 One of the little-noticed findings of the United Nations commission on possible Gaza war crimes is the panel’s strong criticism of Israel’s move to close the books on its military’s killing of four Palestinian boys on a Gaza City beach.

The Independent Commission of Inquiry’s comments on the episode — one of the most widely reported cases of civilian deaths during the war — appeared to offer little hope that Israel’s investigation and exoneration of its soldiers in this case would prevent international bodies from examining it as an alleged war crime.

The U.N. panel’s rebuke, published as part of its June 22 report on human rights violations during the 2014 Gaza war, came just days after a statement by the Israeli military that a criminal investigation by the army had determined that the missile strikes were within the bounds of Israeli and international law.

The U.N. panel, by contrast, found “strong indications” that the Israeli military had broken international law in carrying out the strikes.

The release of the Israeli report in the days before the U.N. report appears to reflect an effort to preempt charges that Israel is incapable of investigating the conduct of its own soldiers regarding allegations of war crimes during the Gaza conflict. Under the rules that established the International Criminal Court in the Hague in 2002, only governments that fail to investigate their own actions during war may be brought up before the international tribunal.

The June 14, 2014 killings took place in the first week of the conflict, before the start of the Israeli military’s ground invasion. The four boys killed were all cousins, aged 9 to 11, hit by two missile strikes. One of the many journalists staying at the hotel nearby, a correspondent for NBC News, wrote on Twitter that he had been playing soccer with the boys minutes before they were killed.

The Israeli military’s report on the killings, published by the IDF Spokesperson Unit, came at the end of an 11-page document describing investigations by the IDF Military Advocate General and the Military Police’s Criminal Investigation Division into a total of seven discrete incidents during the Gaza conflict. The report asserts that the four children on the beach were mistaken for members of Hamas’s Naval Forces gathering to plan military strikes.

“It should be stressed that the figures were not identified at any point during the incident, as children,” the military’s report states.

The report claims that the military chose its weapons specifically to mitigate the possibility of harming civilians, and determined that there were no civilians nearby before authorizing the first strike, which killed one of the children. The second strike killed the other three children as they fled the area.

The U.N.-backed report, written by a commission led by former New York State Supreme Court judge Mary McGowan Davis for the international body’s Human Rights Council, directly challenges the Israeli military’s claims. In a section that criticizes the Israeli military’s failure to bring meaningful indictments against its own members for wrongdoing during the conflict, the report specifically condemns the closing of the investigation into the June 14 killings.

The U.N. report suggests that the Israeli military could have done more to confirm that the people targeted in the June 14 strike were militants. The report notes that the boys were “small in stature in comparison to the size of an average adult,” and that there were no Israeli soldiers in the immediate area, suggesting that a strike need not have been conducted immediately. The report says that international humanitarian law requires that, where there is doubt, combatants must assume that an individual is civilian, and argues that no such assumption was made here. The commission wrote that it was “concerned” that Israel’s Military Advocate General had “validated this incorrect application of international humanitarian law.”

The report also criticized the military for apparently failing to interview journalists and Palestinians who witnessed the incident. Journalists who were there at the time described the structure Israel called a Hamas compound as a small metal shack with no electricity or running water that sat on a jetty in the blazing seaside sun. The structure “does not seem like the kind of place frequented by Hamas militants,” wrote New York Times photographer Tyler Hicks, who was present at the time of the strike and photographed the event.