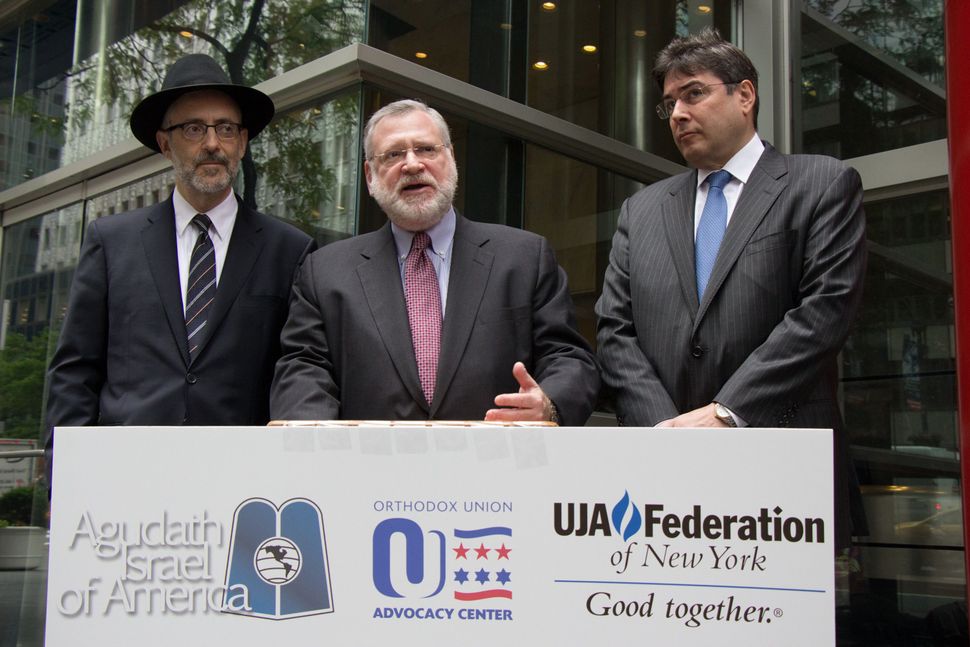 In Albany, New York, last spring, in a rare show of unity, the heads of New York’s leading Orthodox umbrella groups came together with the head of New York City’s Jewish federation to push for the same piece of legislation: a massive tax credit for those people making donations to private school scholarship funds.

They may have pushed too hard.

The coordinated effort was unusual — and also unsuccessful. Just weeks after a June 5 press conference at which the leaders of the Orthodox Union and Agudath Israel of America, along with UJA-Federation of New York, trumpeted their support for the education tax credit bill, the effort foundered. Though a version of the bill passed the Senate and had the support of the governor, it failed to make it to the floor of the state assembly before the legislature ended its session for the year.

Now advocates for the bill and assembly members are scrapping over what went wrong. While some blame the disordered state legislative session, marred by the indictment of the majority leaders of both the Senate and the assembly, others say that the advocates may have hurt their own cause with overly aggressive political tactics.

One member of the assembly, upstate Democrat Anthony Brindisi, told the Forward that he turned strongly against the tax credit bill only after advocates ran robocalls and mailers against him in his district. One mailer, sent by a coalition group, included an image of $100 bills over the statehouse, and linked votes on assembly pay to the education tax credit.

Another assembly member, Yonkers Democrat Shelley Mayer, said that the O.U. sent mailers in her district even though she had said she would vote for the measure.

“There’s no question it affected all of us in the conference, including people like me, who were prepared to vote for it,” Mayer said. “I thought it was not a constructive way to convey the message.”

Meanwhile, though the Jewish groups praise the $250 million consolation prize doled out by Governor

“We spent a tremendous amount of money and resources on this,” said Maury Litwack, director of state political affairs for the Orthodox Union Advocacy Center. “We really went all out on this — mailings, robocalls, all kinds of stuff…. That effort is not wasted. We also believe we’re just getting started.”

The education tax credit bill supported by the Jewish groups would have offered donors to private school scholarship funds a tax credit worth up to 75% of the value of a donation. The Jewish groups supporting the bill argued that it would encourage donations and ease the burden on families paying tuitions to Jewish day schools. Similar programs exist in a handful of other states, including Pennsylvania, Rhode Island and Florida. Critics say that the credits benefit wealthy donors at the expense of state budgets, and that they amount to a backdoor workaround to skirt regulations in some states that ban public dollars from funding religious education.

The Jewish push on the New York bill came after years of efforts by Agudah and the O.U., which have made the tax credit their top priority in Albany. UJA — now under the leadership of CEO Eric Goldstein, who is Modern Orthodox —was a relative newcomer to the effort.

“No UJA-Federation head ever stood up with the O.U. and Agudas Yisroel at a press conference,” said Yehiel Kalish, Agudah’s former vice president and national director of government affairs, who worked on the tax credit issue before leaving the organization in 2014 to enter private practice. “Mr. Goldstein came in; he’s really been a fantastic partner with the community.”

The Jewish groups joined a coalition of wealthy education reform advocates and Catholic groups in supporting the tax credit measure in New York. The effort was led by The Coalition for Opportunity in Education, an advocacy group whose board members included Agudah’s executive vice president, Rabbi Chaim Dovid Zwiebel; the O.U.’s Institute for Public Affairs director, Nathan Diament; representatives of a number of Catholic charities, and a handful of wealthy education reform supporters, including Republican hedge fund magnate Bruce Kovner and Roger Hertog, a prominent conservative philanthropist and the vice chairman emeritus of the investment firm AllianceBernstein.

Tom Carroll, education reform veteran and president of The Coalition for Opportunity, wrote an email to supporters June 24, lamenting his group’s failure to get the tax credit bill through. “We remain committed to fighting on to secure approval of the Education Tax Credit, by whatever means necessary,” Carroll wrote. “To those who donated money (some people, a lot of money) to our effort, we owe our considerable gratitude and a renewed commitment to forge ahead. We know we have not yet delivered on our commitment to you.”

Carroll did not respond to a request for comment from the Forward.

In an interview, Litwack blamed a stubborn assembly for the bill’s failure. “Certain legislators obviously refused to open themselves up to this,” Litwack said. “I think we need to do a better job of getting to them.”

Yet a number of legislators say that they found the broader coalition’s efforts overly aggressive. “I was pretty much silent on the issue until I started getting mailers and robocalls in my district, distorting my position on a number of issues,” said Brindisi, who had co-sponsored a version of the tax credit bill in the previous legislative session.

The mailers in Brindisi’s district, sent by Carroll’s group, incited the assemblyman to speak out against the bill. Brindisi said that he wasn’t opposed to the principle of the tax credit, but he objected to the specifics of this year’s version. “There was no reason to attack me,” he said. “I certainly would have been willing to continue a dialogue.”

Mayer, who is Jewish, said that the O.U.’s mailers didn’t create much of a problem for her. Yet she said that the advocates had made enemies in the conference. “It was personal, it was vindictive,” she said.

Litwack dismissed the legislator’s criticisms. “We saw a dramatic increase in community participation in terms of reaching out to members on this, due to these tactics,” he said. “I’ve been in politics for a dozen years. I’ve never seen elected officials complain about basic lobbying techniques, including robocalls and mailings.”

The immediate outlook for the effort is unclear. Next year will be an election year, which could be a difficult time to win approval for such a controversial measure. Agudah, for one, is willing to hang on until the moment is right.