Can Hillary Clinton Please Both Pro-Israel Megadonors and Democratic Grassroots? 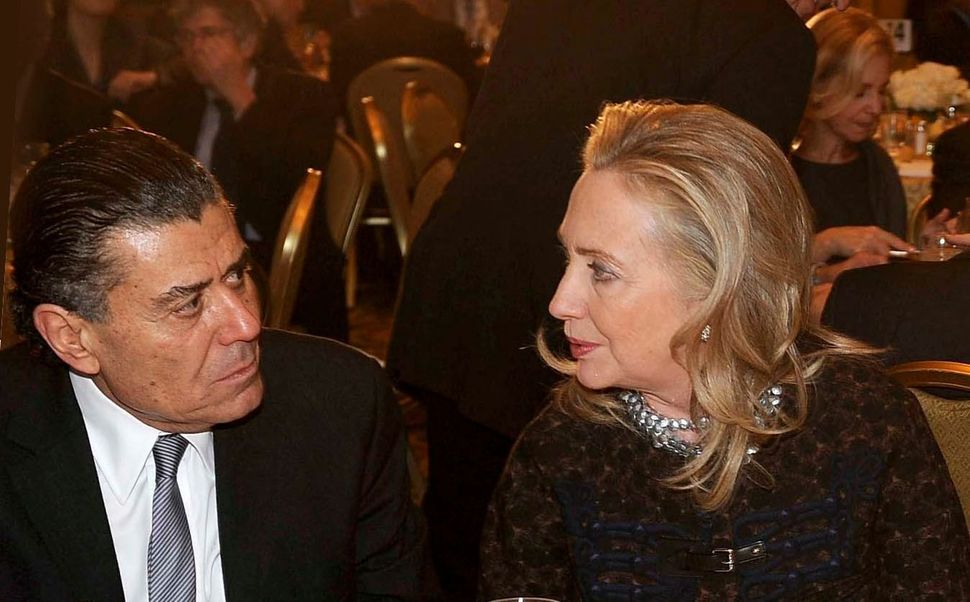 “Look forward to working with you on this,” Democratic presidential candidate Hillary Rodham Clinton promised in a handwritten note to her supporter and major donor Haim Saban at the bottom of a July 2 letter. At stake was the battle to defeat the campaign aimed at boycotting, divesting from and sanctioning Israel.

Clinton’s note to Saban is just one of several exchanges the Democratic Party’s presumptive favorite for the 2016 presidential nomination has had in recent weeks with Jewish donors in which she took a strong, unequivocal pro-Israel stance.

Her declared intention not only to support Israel but also to actively speak out about it in her presidential campaign could help re-energize Jewish donors who have been increasingly worried about President Obama as his relationship with Israeli leaders has deteriorated. But bold positions in support of Israel will require some careful balancing by Clinton. In taking her stand, she will need to please not only wealthy donors but also rank-and-file Democrats for whom automatic support for Israel and its policies are no longer a prerequisite for a presidential nominee.

Polling data suggest an emerging new reality among the Democratic grassroots to whom Clinton is trying to appeal. During last year’s Gaza war, a CNN poll showed Democrats to be more divided than Republicans regarding Israel’s actions. Later, as tensions between the two leaders increased surrounding Benjamin Netanyahu’s speech to Congress on Iran, polls showed a consistent gap between Democrats and Republicans on Israel. In February, Gallup found only 48% of Democrats, compared with 83% of Republicans, say they sympathize with Israel. In April, a Bloomberg Politics poll showed that while most Republicans believe the United States should support Israel even when its interests diverge with American interests, most Democrats believe the opposite is true.

Support for Israel is still strong, but Democratic voters are taking a more skeptical view toward Israeli policies — a trend Clinton has chosen not to follow.

“Israel can no longer claim to have the bipartisan support of America,” Republican pollster Frank Luntz argued in an interview with The Times of Israel.

Democratic pollster Mark Mellman countered that a broader look at available data suggests that “there is very strong support for Israel among Democrats” and that progressive circles in which pro-Israel sentiments are unwelcome are “inconsequential.” Clinton’s pitch to Jewish donors and voters, Mellman added, comes with no political price tag, since even Democrats who do not declare their support for Israel are not hostile toward it and will not view negatively a candidate who stresses her pro-Israel credentials.

Still, at the 2012 Democratic convention, a clear gap was on vivid display between the party’s rank-and-file and Democratic Party leaders.

When Republican and pro-Israel groups assailed the failure of the party’s official platform to support Israel’s claim to all of Jerusalem as its capital, President Obama instructed party leaders to present an amendment doing so to the floor of the convention. But the change, approved in a voice vote, had to be taken three times because of a chorus of “no”s in the arena that seemed to at least equal the “yes”es.

Clinton is now focusing much of her attention on top donors and bundlers whose financial support she needs to run her campaign. At recent fundraisers, they have questioned Clinton time and again about Israel, Iran and Netanyahu.

Clinton’s letter to Saban, which the Hollywood billionaire made public, was yet another attempt to reassure Jewish donors who care deeply about Israel.

“We need to make countering BDS a priority,” Clinton wrote him. “Time after time, no matter the venue, I have made it clear that America will always stand up for Israel — and that’s what I’ll always do as president.” Clinton ended her letter by restating her long record of supporting Israel and recalling her first trip there, to a place she describes as a “modern-day miracle.”

“This is not a one-off for Hillary,” said Ann Lewis who has been advising Clinton on relations with the Jewish community. “This is something she believes in for years.” And while it may not be a top priority for the Democratic grassroots, standing strong with Israel is still a safe political bet, she said.

“There is not a vote to be lost in the Democratic primaries by being pro-Israel,” added Mellman.

Another tightrope the leading Democratic candidate needs to walk is calibrating the exact distance she wishes to put between herself and Obama. Some distance could help reassure worried Jewish Democrats who have been critical of Obama on the issue. But too much distance could put off loyal Obama supporters whose support she needs.

“When it comes to Israel and to every issue, it is important for her to make clear what are her own positions,” said Lewis. “She has her own personal history, her own personal connections and her own record.”

The gap between Clinton and Obama has been especially pronounced when it comes to the question of the administration’s nuclear negotiations with Iran, which Israel opposes.

Speaking to Jewish donors over the past several weeks, Clinton struck a cautious tone — supporting Obama’s diplomatic effort, but stopping short of fully endorsing the deal.

“Her support for the negotiating process and touting support for Israel are not contradictory,” Clinton’s spokesman Nick Merrill told Politico. “A strong deal is good for Israel in her view.”

Clinton has sought to defend Obama in the face of criticism that he is not sufficiently supportive of Israel. But at the same time, she has suggested that if elected, she will take a different approach toward Netanyahu. “Diplomacy is all about personal relationships, and I’ve got my own relationships,” Clinton said to donors at a New York fundraiser.

Still, Clinton has made it clear that her support for Israel will not come at the expense of American interests.

When asked during a meeting with Jewish donors how she would act if a nuclear deal with Iran fits American interests but does not address all of Israel’s concerns, Clinton, Politico reported, said: “I’m going to do what’s in the best interest of the U.S.”

Can Hillary Clinton Please Both Pro-Israel Megadonors and Democratic Grassroots?