Can Jay Dardenne Become the First Jewish Governor of Louisiana? 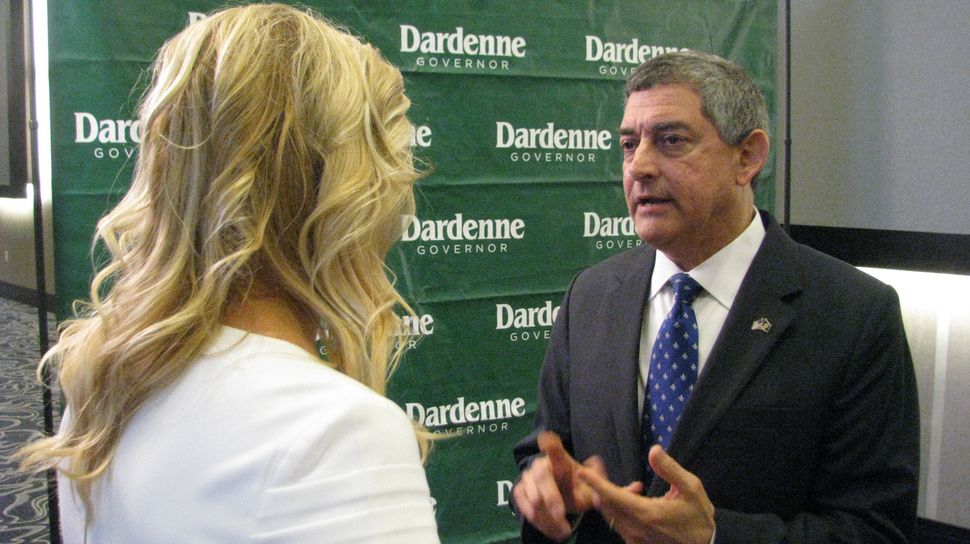 When it comes to colorful governors, the competition in Louisiana is pretty stiff. From Huey “the Kingfish” Long, Franklin Delano Roosevelt’s firebrand populist Southern rival, to Edwin Edwards, the Las Vegas casino devotee who joked about his extramarital affairs and won his final term in 1991 by defeating former Ku Klux Klan grand wizard David Duke, the state is known for producing leaders who cut a vivid swath on the political canvas.

No one would consider Louisiana’s current lieutenant governor, Jay Dardenne, to be colorful, though he can break up a room with his imitation of a southwest Louisiana Cajun patois.

But Dardenne, who is now running in the October gubernatorial primary, will still make the record books if he is elected: If that happens, Dardenne will be Louisiana’s first Jewish governor. In fact, according to several historians, no Southern state has elected a Jewish governor since at least Reconstruction.

If Dardenne wins, his will be one of the most understated of Jewish governorships. This is the South, where a candidate’s Christian values are a key issue for many voters. And Dardenne is hardly running in the mold of outspoken Jews like the late Ed Koch. The 61-year-old moderate rarely mentions his Jewish faith on the campaign trail. And he is married to a Catholic, to boot.

Still, in an interview, Dardenne told the Forward that his Jewish identity “plays a significant role in my values.” He added: “It’s a very private thing. Your faith is something you have yourself. I’ve never tried to evangelize in any kind of way. I do talk a lot about God and what the power of prayer can do.”

A native of Baton Rouge, Dardenne was raised as a Reform Jew in a family that, he acknowledges, did not regularly attend Congregation B’nai Israel, the synagogue where they were members. Later, he and his wife, Cathy Dardenne, raised their two sons as Catholics, and Dardenne said he attends Mass fairly regularly and his synagogue only on High Holidays.

Leaning forward at a hotel conference table, Dardenne recalled writing an award-winning essay on the Jewish obligation to perform mitzvot, or good deeds, the year of his confirmation at B’nai Israel. “I also memorized a beautiful prayer derived from Deuteronomy 6:5 that reminds us to “love the Lord with all your heart, all your soul, and all your might,” he said. “These two experiences were my inspiration to embark on a lifelong commitment to volunteerism and serving others.”

In Louisiana’s open primary system, all candidates appear on the same ballot in October, regardless of party, and voters may vote for any candidate, regardless of their own party affiliations. The top two finishers then face off for the final round in November.

The other gubernatorial candidates are U.S. Senator David Vitter, public service commissioner Scott Angelle and State Representative John Bel Edwards, the lone Democrat. The most recent independent poll, in May, showed Dardenne in third place with 16%, behind Vitter with 38% and Edwards with 24%.

Conventional wisdom favors Vitter, who has raised the most money and is a strong campaigner. But conventional wisdom has been wrong before in Louisiana. Unlike Edwin Edwards, Vitter has championed Christian family values as a core part of his political identity. But in 2007, he was revealed to have consorted with prostitutes in the nation’s capital. He won re-election to the Senate in 2010 despite the scandal. But it remains to be seen how he will fare in the race for governor, an office Louisianans subject to more scrutiny.

Meanwhile, Dardenne is upholding the banner of a political species thought to be almost extinct: the moderate Republican. And in doing so he is running against the record of the incumbent, Bobby Jindal, who is a candidate for president.

“The main problem with this governor is that he didn’t communicate,” Dardenne said in a recent forum. “He didn’t listen to people. And he was unwilling to think that anybody else had any good ideas.”

Dardenne offers policy prescriptions notably different from those of Jindal, under whom the state has continued to rank near the bottom in most national indexes for health care and educational achievement.

Unlike Jindal and Vitter, Dardenne wants Louisiana to retain the Common Core educational standards that are under conservative attack. Unlike Jindal, he wants to find a way for Louisiana to seek federal Medicaid dollars under President Obama’s health care law. He is not a supporter of same-sex marriage, but wouldn’t have dragged his feet in implementing the Supreme Court’s landmark ruling, as Jindal did. Like most Republicans in Louisiana, Dardenne opposes abortion under most circumstances.

During his 15 years in the state Senate, he wrote legislation that gave greater rights for crime victims, and created a tax subsidy for movies filmed in Louisiana, which has been popular with Hollywood producers. He also helped push through a measure approved by voters that raised income taxes on higher-end individuals — a measure that Jindal and state legislators later reversed. Dardenne also wrote legislation that allowed the state of Louisiana to buy Israel bonds. “It’s a way of financially supporting Israel,” he said, adding, “They are the highest quality.”

Joshua Stockley, a political science professor at the University of Louisiana at Monroe, said Dardenne has carved out a reputation as a pragmatic problem solver who eschews trying to score political points by fiery rhetoric.

“He is decidedly less conservative than most Republican officeholders in the state,” Stockley said. “The problem he faces is that the middle is where the competition is. He’s competing against Angelle for those who don’t like Vitter.”

While Louisiana has never elected a Jewish governor, Jews do have a political history in the state, as Dardenne, a Louisiana history buff, is quick to cite.

Dardenne notes that Judah Benjamin, a slaveholder, was elected twice to the Senate from Louisiana and went on to serve as the Confederacy’s secretary of state during the Civil War. Over the course of its time as a state in the Union, Louisiana has had four Jewish state senators, he said; he was the fourth.

Under the state’s electoral math, Dardenne cannot win without the votes of Democrats. While Republicans hold all statewide offices, more voters are registered as Democrats, and Vitter, the front-runner, is considerably more conservative.

With the governor’s race beginning to heat up, few voters seem to be aware that Dardenne is Jewish. But one of his supporters, he said, had contacted him recently about a so-called “push-poll” the supporter had been on the receiving end of, with questions that called attention to Dardenne’s Jewishness and put it in a negative light. Dardenne said he did not know the identity of the poll taker or for whom it was done.

“I take that as an attempt to disparage me because of my faith and inform the voter who may not know of that,” he said. “I certainly hope it doesn’t enter into the race, but some people may choose to make it a factor.”

Can Jay Dardenne Become the First Jewish Governor of Louisiana?