At Kibbutz Near Gaza, Wounds Are Still Healing 1 Year After War 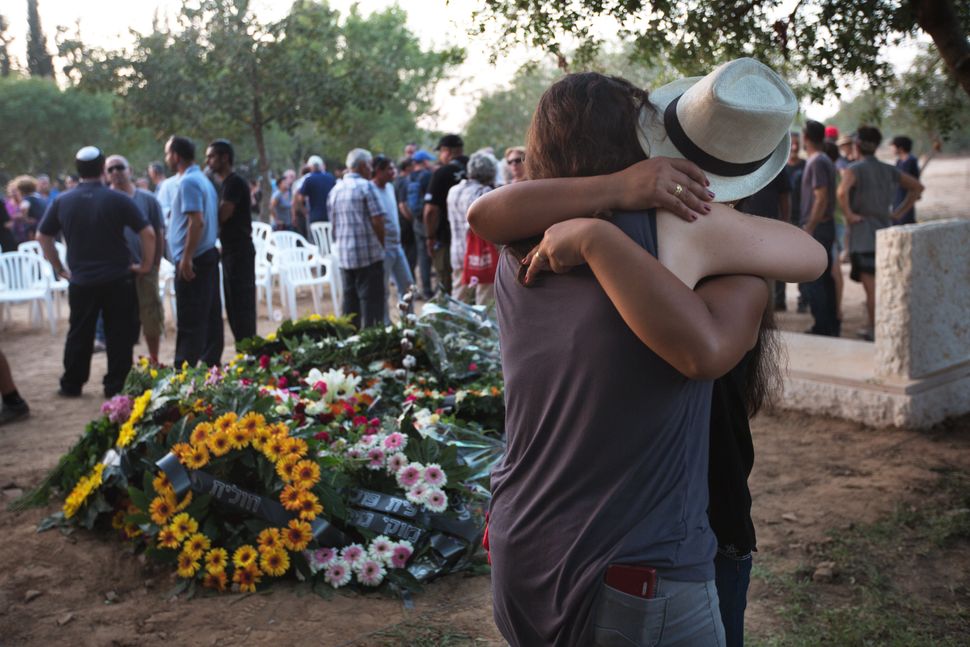 Bereft: Mourners at the grave of Shachar Melamed, one of two kibbutzniks killed August 26, 2014. Image by Getty Images

When Arnon Avni gives tours of Kibbutz Nirim, he always stops several yards short of a small electrical tower near the preschool. That was where a Hamas mortar struck three of his friends at the tail end of last summer’s war between Israel and Gaza. Two died, and the third lost both of his legs.

Out of deference to the families, who still live on the kibbutz, Avni, a 62-year-old kibbutz spokesman, won’t bring groups to the tower. Standing on a nearby street, he pointed to a blond woman in a black tank top in the schoolyard. It was Anat Melamed, Shachar Melamed‘s widow, who teaches at the preschool. Then Avni signaled to a boy on a bicycle — the son of Gadi Yarkoni, whose legs were amputated to save his life. Avni patted the boy’s back as he pedaled by. Though both were no longer in sight, he kept his distance from the tower.

“I don’t want to stand on this wound,” he said.

Last summer’s wounds are not immediately apparent upon entering the kibbutz. On a July day one year after the war, the neighborhood’s palm-lined streets were quiet. The trees were in full bloom, providing leafy cover to the thick concrete bomb shelters that dot the neighborhood. In the fields nearby, farm workers were cultivating sweet potatoes, the kibbutz’s main crop.

Nirim is home to 400 Israelis, including 100 children. Founded in 1946 by socialist Zionists in order to strengthen Jewish settlement in the Negev, the kibbutz was nearly decimated by Egyptian troops in the 1948 Arab-Israeli war. After the war, the kibbutz moved about 10 miles to its current location, less than 2 miles from the Gaza border.

In recent years, the kibbutz has been besieged by rocket fire from Gaza. Yet in keeping with its socialist roots, many residents consider themselves left-of-center. More than half of the kibbutz voted for the Zionist Union in the 2015 election.

Nirim was one of the worst-hit Israeli communities during the region’s most violent summer in recent memory. The kibbutz is out of range of the Iron Dome, Israel’s missile interceptor, so when a red alert sounds, residents have just seconds to take cover. More than 2,200 Gazans, mostly civilians, and 72 Israelis, mostly soldiers, died during Operation Protective Edge. Of the six Israeli civilians killed, two perished in Kibbutz Nirim hours before the final cease-fire.

The casualties at Nirim have a particularly bitter resonance for the kibbutzniks there, because the victims were also the community’s protectors. Ze’ev Etzion, 55, was responsible for security on the kibbutz. Melamed, 42, was a former security chief and ran the kibbutz garage. On August 26, Etzion, Melamed and Yarkoni were assisting electricians who had come to the kibbutz to repair the power outage from a Hamas mortar earlier in the day, when they were struck by another mortar. Etzion died instantly, and Melamed later at a hospital in Beersheba.

Nava Etzion, Etzion’s wife, received the news when she was at Mishmar HaEmek, a kibbutz in the Galilee where many of Nirim’s residents have sheltered during Israel’s past three operations in Gaza. Until the moment he died, she had not considered the possibility of her husband’s death. Etzion had conveyed a preternatural confidence in his ability to protect himself and his community. His wife was reminded of this trait on a recent trip to the United States with a group of wives of kibbutz security chiefs, paid for by a pro-Israel organization. The other women talked about how fearful they were for their husbands. But it had never occurred to Nava Etzion to be afraid.

“He gave us the feeling that nothing will happen to him,” she said.

Sitting on a brick-red couch in her home at Nirim, she described her husband as a jack-of-all-trades who volunteered for 30 years with Magen David Adom, Israel’s emergency medical service. Though he wasn’t born at Nirim, he felt deeply attached to the kibbutz. In Operation Cast Lead in 2008, she said, Etzion had at first objected to her evacuating the family, for fear that it would send a message to the children that Nirim wasn’t truly their home. 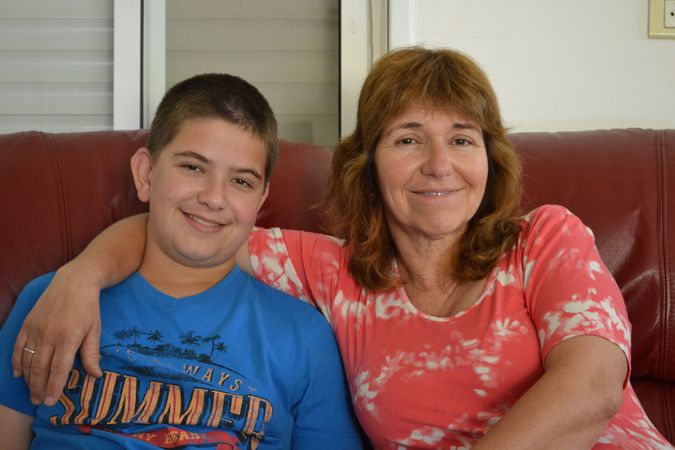 Surreal Grief: Nava Etzion and her son Tal, 14, are still trying to adjust to life without their husband and father, Ze'ev, killed by a Hamas mortar last August. Image by Naomi Zeveloff

Yet during each round of warfare, the family went to Mishmar HaEmek and Etzion stayed behind, turning the living room into a “war room” from which he would manage the kibbutz’s security with two cell phones and a pager attached to his hip. Etzion relished his job, his wife said. But by the beginning of Operation Protective Edge she began to sense his fatigue.

After his death, the family has had to readjust in ways big and small. Electronics would break around the house — the television, or the computer — and no one would know how to fix them. The Etzions’ five children, ranging in age from 12 to 23, joked that their mother had to learn how to cook now that Etzion was no longer there to prepare falafel. And yet, she said that her grief has a surreal quality to it; she can’t quite grasp what has happened to her.

“You think that it happened to someone else, that it is not true,” she said. “You don’t get used to it.”

Other kibbutzniks said that Etzion’s death left them feeling vulnerable — not only because the community lost a competent security chief, but also because Etzion himself seemed so indomitable. Adele Raemer, an American-Israeli who has lived in Nirim since the 1970s, said that Etzion visited her hours before his death when a mortar landed outside her bedroom. Shaken but unharmed, she left for Tel Aviv that evening. The next morning she returned to the kibbutz for Etzion’s funeral.

“Until that happened, everybody felt sort of immune,” she said. “I mean, you have the type of person like me, that when there is a red alert I am sure it is going to land on my head, and then there is the person like him, who is sure that wherever it falls it will not be on me. I don’t know why, but he was wrong.”

Though life has stabilized at the kibbutz — Raemer noted that she moved her glass table back to the middle of the room — she said she is waiting for “the other shoe to drop.” Her adult daughter, also at Nirim, lives in fear of an infiltration through Hamas’s cross-border tunnels. During the summer of 2014, Hamas fighters emerged through a tunnel near another Gaza border kibbutz and killed five Israeli soldiers.

Yet Raemer believes that a solution will come only through negotiations. She is a member of the Movement for the Future of the Western Negev, a year-old group pushing the Israel government to come to a regional and long-term agreement to the conflict with Hamas. She believes that the failure to rebuild Gaza will result in more warfare.

“Not one of the houses [in Gaza] that was destroyed or hit has been fixed,” she said. “My bedroom was fixed within two weeks.”

In small ways, the kibbutz is preparing itself for the next round of violence. During Operation Protective Edge, many elderly members chose to stay in their homes because they were more comfortable there, and also out of a sense of commitment to the kibbutz. But that meant that others had to stay behind to take care of the elderly, which some believed was unfair. Now the kibbutz is looking to streamline its evacuation procedures for next time by possibly requiring elders to leave, Avni said.

And yet, residents point to the addition of 10 new families to the community as proof that the kibbutz will flourish in the future. The families were already living at the kibbutz, and had applied for membership before the fighting last summer. Two other families who were renting have left. If there was one silver lining to the August 26 incident it is that Yarkoni, the man who lost his legs, has been elected to lead the Eshkol Regional Council, which encompasses dozens of communities in the area. He campaigned on strengthening security in the region.

Meanwhile, Etzion’s family will celebrate his life on the one-year anniversary of his death. The children are preparing a musical performance like the one they did just a month after he died, with Neta on the flute, Maayan and Gil on guitar, and Omer and Tal on the piano.

At Kibbutz Near Gaza, Wounds Are Still Healing 1 Year After War