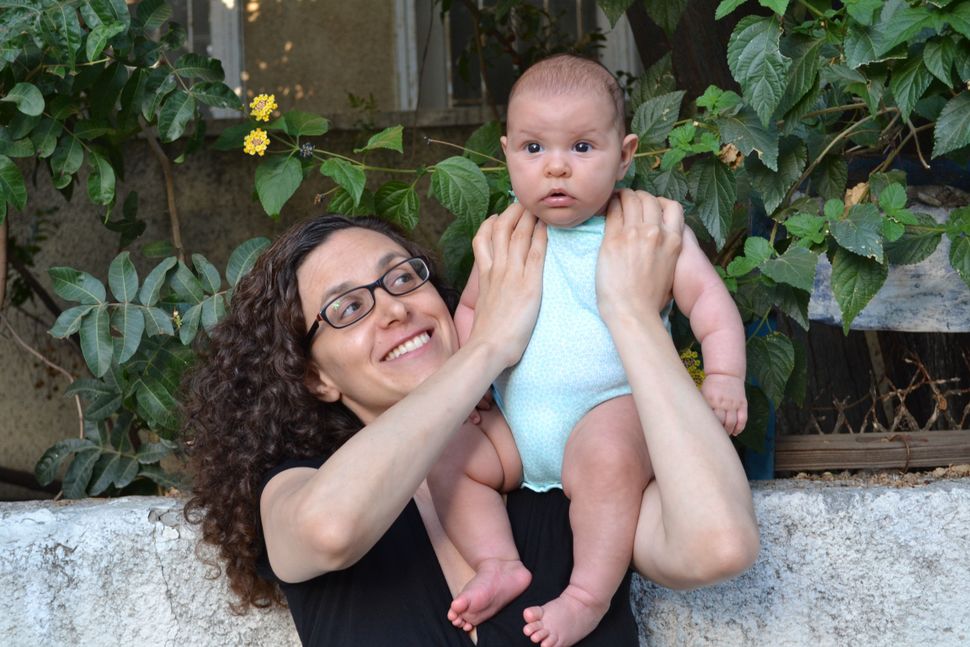 Jessica Zimet and her daughter Aviah in Tel Aviv. Image by Naomi Zeveloff

When Jessica Zimet gave birth to her daughter Aviah in April, the Tel Aviv hospital was so crowded, she said, that she was rushed out of the delivery room to make space for the next expectant mother.

Born nine months after the start of Operation Protective Edge, Aviah was part of what some are calling a post-war baby boom in Israel.

“The stress of the fight means more deliveries after the war,” said Avivit Karni, head midwife at Kaplan Medical Center, in Rehovot.

The Israeli Ministry of Health has yet to compile data on birthrates over the past few months. But according to anecdotal reports, some Israeli delivery rooms were working overtime in April, May and June. At Kaplan, Karni’s staff facilitated 100 additional births per month (around 650 versus the typical 550).

Karni suspected that many of the births at her hospital were to couples that conceived when the husband was home from reserve duty during the war.

But Leanne Kaye, a consultant who helps new immigrants and others navigate the Israeli birth system, had a different explanation for the baby boom: boredom. As Hamas fired rockets — many of which were intercepted by Israel’s Iron Dome system — on major Israeli cities, Tel Aviv’s famously active nightlife ground to a halt. Stuck indoors, bored Israelis got busy.

“People’s lives slowed down to the point where they just stayed at home,” Kaye said. “Those trips to the beach during the day or the evening weren’t happening for quite a chunk of the summer.”

“You arrive at the labor ward, and every ward is full. Someone leaves a room, and you go in that room. It was a proper conveyor belt,” she said.

Calls to other maternity wards yielded mixed information on just how widespread the uptick in births was nine months after last year’s war. Some reported no increase, while others echoed the experience at Kaplan Medical Center.

But to the extent that there was a postwar “boomlet,” it would certainly not be Israel’s first. According to Karni, Kaplan’s delivery room saw similar upticks in births after Israel’s previous two operations in Gaza: Operation Cast Lead in 2008–2009 and Operation Pillar of Defense in 2012. There was also a baby boom nine months after the 2006 war between Israel and Hezbollah was fought on the Lebanese border. And Israel had prolonged periods of increased birth rates after the 1973 Yom Kippur War and the 1967 Six Day War.

Zimet, who works in marketing, conceived with her husband shortly after the first warning sirens sounded in Tel Aviv, at the beginning of Operation Protective Edge. She said she’d wanted a child but had been adamant about waiting.

“I didn’t want to get pregnant during the war, because I thought it would be stressful and bad for the pregnancy,” she said.

By the time Zimet learned that she was carrying a daughter, the war had already ended.

“I think if I had known I was pregnant, it would have been a lot more stressful,” she said.

Sandy Heffez Milrad conceived a few months before the war began, but her 6-month-old son is in a sense part of the baby boom. That’s because his name is Eitan, a popular Israeli name that means “powerful” or “strong.” In Hebrew, Operation Protective Edge was called Mivtza Tzuk Eitan, or Operation Strong Cliff.

When Milrad registered her son with the Ministry of Interior after his birth, she learned from officials that many parents had chosen the name Eitan precisely because of their wartime pregnancies. This phenomenon is not unique to Israel’s most recent war. A popular name for Israeli women born in the mid-’70s is Maya, an acronym of Milhemet Yom HaKippurim, the Yom Kippur War.

But Milrad said that she and her husband had picked out the name Eitan long before last summer’s Gaza operation. She bristles at the notion that she named her son after the war, which she believes Israel lost.

“For me, it is a memorial of dead soldiers,” she said.

She is resigned to the fact that her son will be one of many Eitans when he begins attending school in a few years: “It is going to be Eitan A, Eitan B and Eitan C.”