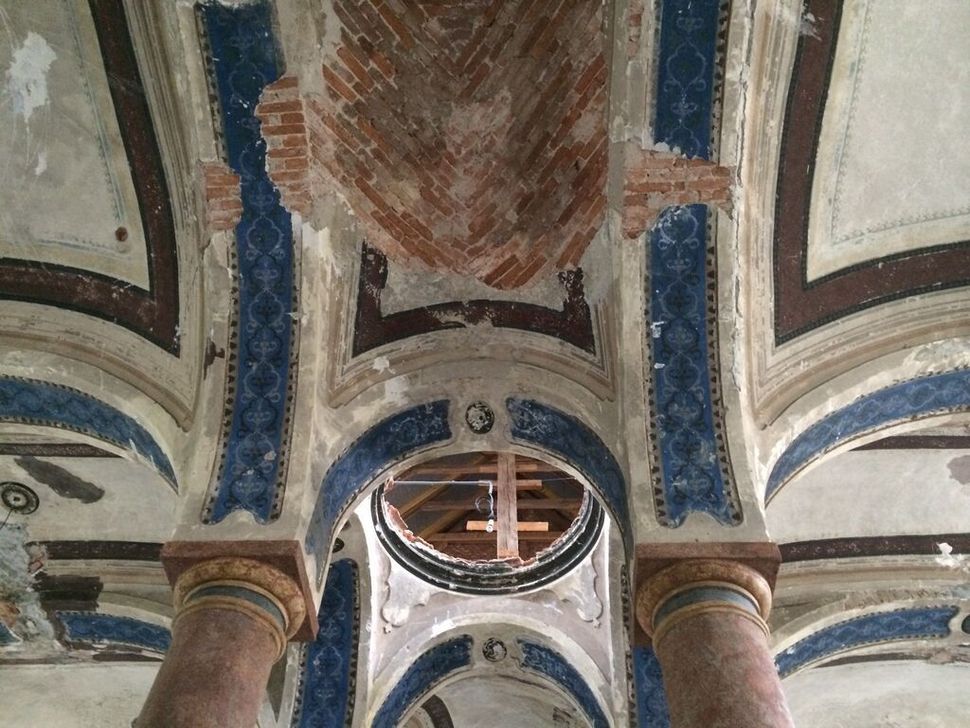 Relic of a Distant Past: The 200-year-old Stupava synagogue is one of the few of its type left in Europe. Image by Lawrence W. Brown

Tomas Stern was born decades after World War II, decades after Nazi Slovak militia fired bullets into a pile of hay, narrowly missing his father — not yet 5 years old — who lay trembling beneath the straw.

“They got some information that there are some Jews hiding there, so they ran into the stable,” Stern explained. “They were too lazy to look around, so they were shooting into the heap.” The childhood trauma left Stern’s father a stutterer who as an adult memorized poetry to overcome his disability.

This, perhaps, is why Stern decided to become a healer; he trained as a physician. But in 2006 he took on a different sort of restoration project.

He decided to salvage the 200-year-old Stupava synagogue, long abandoned and in ruins — one of the few of its type left in Europe.

“I realized that if nobody is doing something with the synagogue, it will collapse,” explained Stern, who lives in Bratislava, the capital of Slovakia, about a 15-minute drive away.

I stood with Stern in this cavernous space, with its distinctive nine vaulted bays, their blue paint still bright in places, as he talked about his rescue project. After World War II, only four or five Jews returned to this village, he said. At one time, a third of the population had been Jewish.

That part of the story is one I know well, for Stupava was the home of my great-grandparents — the place where a Geiringer brother and sister married a Hindels sister and brother. The two couples gave birth to a large tribe of doubly related cousins, and although many moved away to big cities such as Vienna, Bratislava and Budapest, they would return each spring to celebrate a raucous Passover with the grandparents.

Until the Holocaust. None of my family returned to Stupava. Many can be found among the ashes of Auschwitz and other death camps. The survivors are scattered around the world, with their children, grandchildren and now great-grandchildren living in Australia, Canada, France, England and the United States.

Until a few weeks before meeting with Stern in this small village, I had no idea that a synagogue even existed in Stupava.

I did know about the cemetery. I also knew, from relatives who had visited our great-grandparents’ graves, that it was locked, that the man who lived next door had the key, and that no one in my family knew his name or how to reach him. Worrying that I would travel here for naught, I searched the Internet, hoping to find someone in Stupava — or Stampfen, as it was known during the Austro-Hungarian Empire — who could lead me to the neighbor.

Instead, I found Dr. Tomas Stern and his not-for-profit organization, Jewrope, along with a surprising trove of new information, new research and newly formed organizations focused on Slovakia’s Jewish heritage. In 2005, for instance, Maros Borsky of Bratislava wrote an exhaustive doctoral dissertation that became a book — “Synagogue Architecture in Slovakia: A Memorial Landscape of a Lost Community.” It catalogs some 100 synagogues and prayer halls in Slovakia, of which only a handful are still in use for Jewish worship, often irregularly. 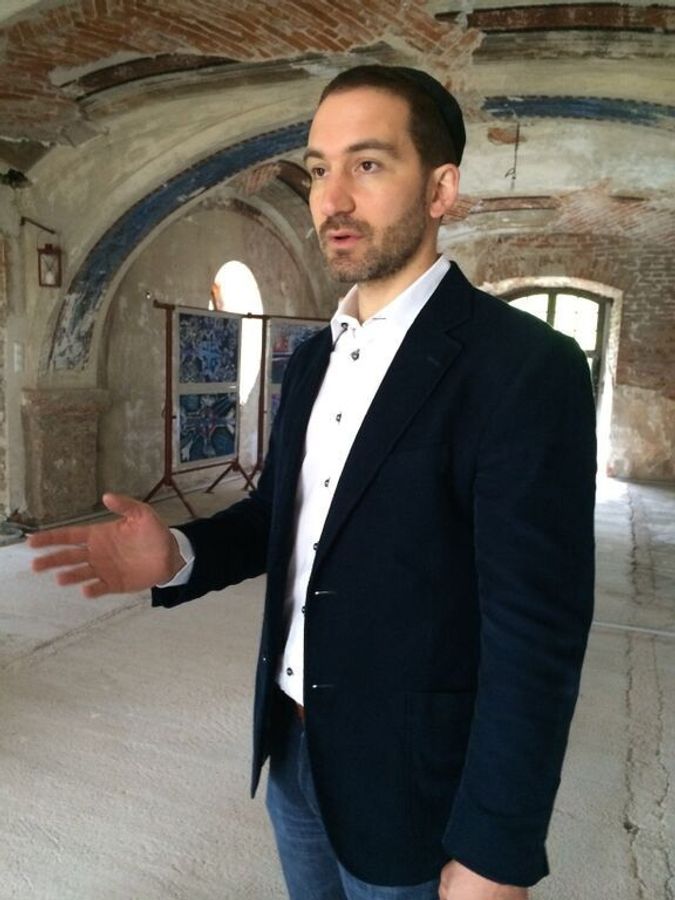 Man on a Mission:_ Tomas Stern, a key figure in the revival of Slovakia’s Jewish heritage, traces his Jewish roots back to 1778._ Image by Lawrence W. Brown

Underway is a Jewish heritage trail through Slovakia, with stops at a number of cemeteries, former synagogues (now mostly art galleries) and some Jewish museums, and research continues into Slovakia’s Jewish history and architecture.

Stern, 43, is a key figure in this revival. During the mid-1990s, while in medical school, he traveled the country taking thousands of photographs of the remnants of its Jewish culture after Nazi devastation and Communist disdain. He wanted to learn his family’s own Jewish roots — which he has now documented back to 1778 and forward to his parents, who survived the Holocaust with the help of Christian Slovaks.

But his interest quickly blossomed into something much larger. Some of his photos were exhibited in the 1990s at the B’nai B’rith Klutznick National Jewish Museum in Washington, and published by the new Slovak government after the fall of communism. Others are at Yad Vashem, in Israel. “It was kind of a hobby of mine. I was taking pictures of Jewish monuments, synagogues, cemeteries, all around Slovakia. I documented hundreds of sites, most of them heavily neglected. Some of the synagogues don’t exist anymore today,” Stern said.

He was not about to let that happen to the Stupava synagogue, even though his family had no ties to it, so he turned for support to the still functioning Jewish community of Bratislava, where officially, he said, there are about 500 Jews.

“From an architectural point of view, it’s quite unique,” Stern explained. With its nine bays (three by three, creating a square) and four pillars in the center framing the spot where the bimah once stood, it is a rare example of Polish-style synagogue architecture that started in Krakow and then spread around Eastern Europe. It is also the oldest synagogue in Slovakia still used for some Jewish events. Of the two that are older, he said, one has only a few remaining walls and has been rebuilt as a private house; the other is used for storage.

A lunette window behind the Aron Kodesh probably brought in light when the ark was opened “like a performance,” to “make an impression,” he said. Remnants of Hebrew letters painted in black on the white wall outside the sanctuary and on tzedakah, or charity, boxes suggest donations to the chevra kadisha, the burial society, to help pay for funerals. A women’s balcony looks down on the space. A photo from 1906, an era when the town had anywhere from 500 to 1,000 Jews, according to Borsky’s research, shows ornate furnishings, including tall urns and candelabras, intricately woven textiles and delicate architectural details, a richness now almost unimaginable in this empty space. Though the photo is in black and white, it’s likely that the blue paint on the arches dates from around then, Stern said.

Equally difficult to imagine is how the building looked just a decade ago, when Stern adopted it: without windows or roof, its brick understructure widely exposed to rain, wind and snow. Since then, Stern and his foundation have raised more than $700,000 from such groups as the Rothschild Foundation and the World Monuments Fund, along with private donations, including “a lot from myself,” said Stern, who now runs a medical business.

The roofs and the windows are new, as are the exterior plaster and paint, plumbing, drainage and electricity. 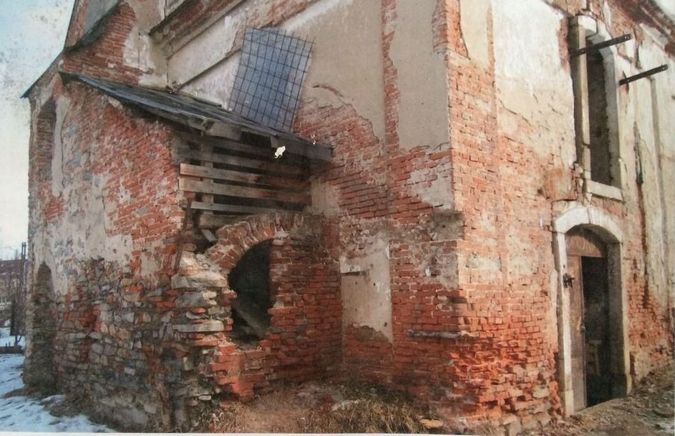 Among the Ancient Ruins: The synagogue as seen prior to 2006 when renovations began. Image by Courtesy Tomas Stern

Almost immediately, Stern put the synagogue back to use, mostly for musical performances and seminars. A cantor from Vienna, an hour away, holds concerts there on occasion, and in 2011 Stern himself was married in the synagogue. “So we are trying to bring some Yiddishkeit into the building again,” Stern said, even though Stupava itself has no Jewish community today.

Moisture from a nearby spring, exacerbated by a concrete floor laid by locals when the building was used as a warehouse, causes humidity problems. Rather than furnishing it, Stern is planning a high-tech light installation that will project the synagogue’s story on its walls.

After opening a window to let out a few birds that had found their way into the synagogue, Stern led us uphill on a narrow road to my destination — the cemetery. As old as the synagogue is, the town’s Jewish cemetery is more than a century older, with a stone dating from 1690. Stern calls it the oldest preserved Jewish cemetery in Slovakia.

The neighbor with the key has pulled up many of the fallen headstones, removed twisted roots and weeds, and still keeps the grass mowed. Still, after so many centuries, as well as vandalism during the Nazi years, it is no longer possible to read many of the names and Hebrew inscriptions.

Stern has counted 3,000 tombstones and created a topographic map, but he has yet to try to catalog all the graves. He knows about some of those who lie here, including the town’s last rabbi: “He died of a heart attack in his bed when the Nazis came to deport him.”

Another buried here is Rabbi Mordechai ben Jacob Baneth (or Banet), who wrote the Sefer Mordechai. “So there are Jews all around who are coming to pay tribute. Not a lot, but they are coming,” Stern said.

Max Reinhardt, the famous Viennese theater director who founded the Salzburg Festival, was born and raised in Stupava, as was opera director Angelo Neumann, who produced the first full production of Richard Wagner’s Ring Cycle, and “despite being Jewish was a close friend of Wagner,” Stern explained.

As I wandered among the gravestones, a welling-up of emotion surprised me. How many of these people were my people? What had their lives been like? I would never know their stories or be able to recount them to my own children and grandchildren, an impulse behind my pilgrimage. Coming here offered only a headline of my past.

Suddenly, I saw them: Two pairs of tall stones, standing erect side by side. The white ones said “Simon Hindls and Johana Hindls” — my great-grandparents. And the gray ones had the names of my great-aunt and -uncle, “Max Geiringer and Laura (born Hindls).”

It seemed fitting that these two couples, so intertwined, should rest in eternity so close together.