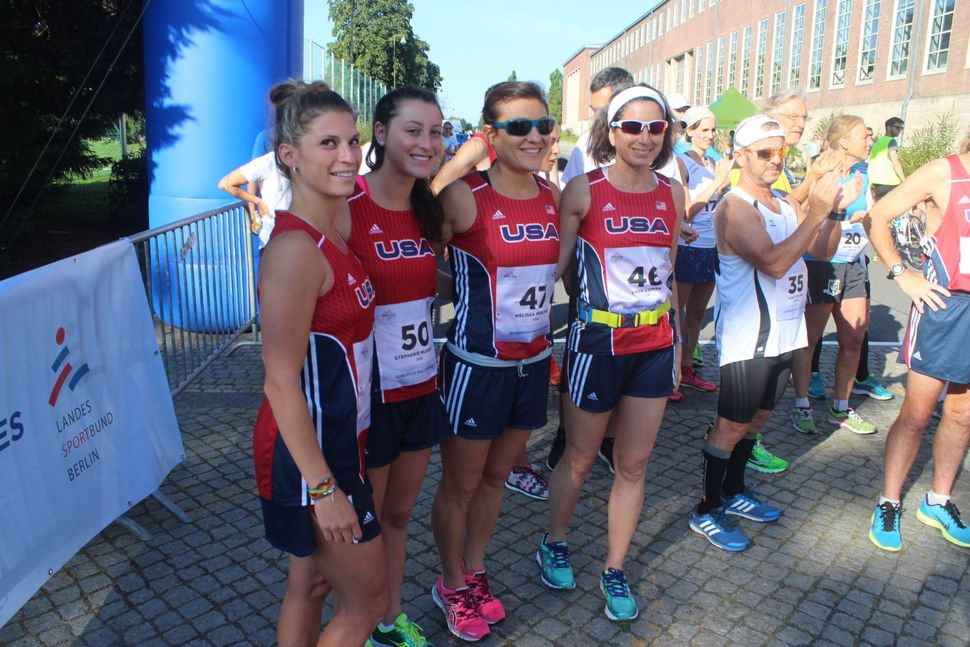 Melissa Perlman has participated in countless running competitions, but none were as emotional as the half marathon race in Berlin last Sunday.

“To come to Germany 70 years after the Holocaust and represent Jews and take a stand for something so much bigger than ourselves was an opportunity I could not turn down,” said the 33-year Perlman, who flew five thousand miles from her home in Delray Beach, Florida, to the German capital to attend the event.

Perlman is one of 2,300 Jewish athletes, from 36 countries, who took part in the 14th European Maccabi Games, which were completed on Tuesday. The Games, which take place once every four years, alternating cities in Europe, are an initiative of the Maccabi World Union (MWU) – a Zionist organization that promotes amateur sports as a means to bring Jews closer to Judaism and Israel.

This year, seven decades after the fall of the Nazi regime and half a century since the start of diplomatic relations between Israel and the German Federal Republic, the European Maccabi Games were held in Germany for the first time. In a statement published leading up to the Games, German chancellor Angela Merkel wrote: “In view of the past, Germany may truly be thankful for the restored diversity of Jewish life in our country and for the renewed trust of the guests from abroad.”

The Games’ opening ceremony took place in Berlin’s Waldbühne – an amphitheatre built in the 1930’s at the request of Nazi propaganda minister Joseph Goebbels. The ceremony’s guest of honor was German president Joachim Gauck, who said he was very happy and moved by the fact that Berlin, which once discriminated against and humiliated Jewish athletes, is now hosting a Jewish sporting event.

The climax of the ceremony was the lighting of the Maccabi torch by descendants of the Jewish athletes who 79 years earlier were prevented from taking part in the 1936 Berlin Olympics. Nancy Glickman, daughter of Marty Glickman — the famous sports broadcaster and Olympic athlete — lit the flame that officially launched the 2015 European Maccabi Games. Glickman senior had travelled to Berlin as part of the 1936 U.S. Olympic relay team but, along with fellow Jewish athlete Sam Stoller, was suddenly replaced at the last minute, in a move widely believed to avoid embarrassing Adolf Hitler.

The decision to award the hosting of the competition to Germany has huge symbolic significance for the country’s Jewish community, according to Alon Meyer, president of Maccabi Germany and one of the main organizers of the event. The German Jewish community has been growing in recent years as a result of immigration from Israel.

“It’s very important for us because several people with numbers on their arms are still alive and they see how Jewish life has changed in the last 70 years here in Germany,” said Meyer, a businessman from Frankfurt whose father fled Nazi Germany for Palestine. “We show that Hitler did not reach his aim.”

This year’s “Jewish Olympics” were embraced by Germany’s highest public representatives — like president Gauck and chancellor Merkel — but also by everyday Germans. Meyer pointed out the vast majority of people who handled various technical aspects of the competitions were non-Jewish German citizens who volunteered their time and efforts to the event. “It shows this normality we have here in Germany in nowadays,” he said.

The Maccabi World Union was founded in 1921 with the goal of making Zionism more accessible to Jewish youth. Prague hosted the first ever European Maccabi Games in 1929. But the rise to power of the Nazi regime caused a 30-year hiatus, which only ended with the 1959 Games in Copenhagen. While the horrors of the past were could not be forgotten, the goal of the Maccabi movement is strengthening Jewish communities in the present and future, according to Jed Margolis, executive director of Maccabi USA. Margolis explained sports are the magnet that brings everybody together — a vehicle to help build Jewish identity and a connection to Israel. 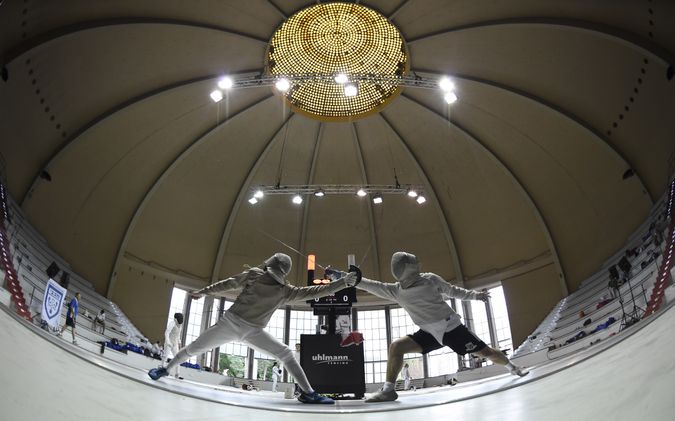 On Guard: Athletes compete in the fencing event of the European Maccabi Games. Image by Getty Images

“We are faced with what I call the three A’s: assimilation, anti-Semitism and worst of all apathy,” said Margolis. “And I am thinking if we can get more kids engaged in [the Maccabi Games] we can help overcome those three threats to the Jewish community.”

“We try to build Jewish pride through our activity,” he added.

For both Perlmans, this past week was very exciting because it was their first ever visit to Germany. Russell explained that traveling from Florida to Berlin was worth it just to see his daughter run and to experience, once again, the special spirit that he feels exists in every Maccabi Games. “It brings out a unity with the people, it really does,” he said.