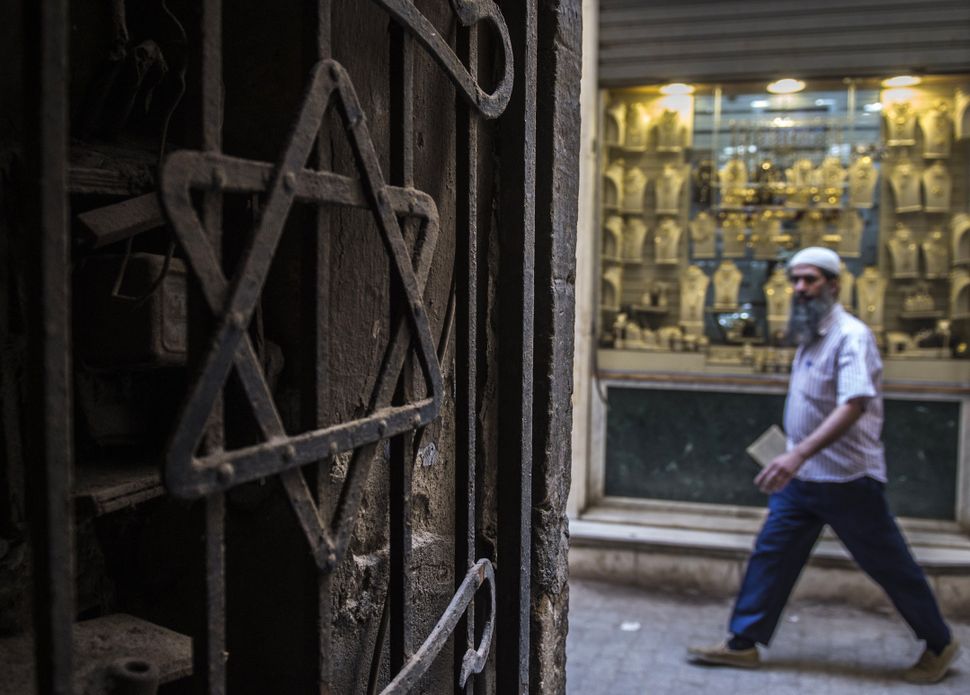 (JTA) — It’s been a particularly challenging summer for Egyptian President Abdel Fattah El Sisi. Within one week in late June and early July, his attorney general was assassinated in the upscale Cairo suburb of Heliopolis and an Islamic State affiliate launched a two-day siege in the North Sinai town of Sheikh Zuweid.

But just days after the bloody Sinai battle, Sisi put aside two hours to meet with a delegation from the American Jewish Committee, the global Jewish advocacy group, and then delivered a matter-of-fact account of the meeting to the state-run Middle East News Agency. The conversation revolved around regional terrorism threats, the stalled peace talks between Israelis and Palestinians, the nuclear deal with Iran and the preservation of Egyptian Jewish heritage, according to the AJC’s director of government and international affairs, Jason Isaacson, who coordinated the delegation.

The AJC meeting at the presidential palace came at a time when Egyptian attitudes about Jews are changing. Egyptians are reassessing 1950s-era nationalization policies that squeezed out the Jewish community and other ethnic minorities. The word “Jew” is used less frequently as a curse word, and the historical TV drama “Jewish Quarter” was a breakout hit during Ramadan. The series cast the Islamist group the Muslim Brotherhood as a greater threat to Egypt’s unity and security than the Jews and, sometimes, even the Zionists. (Past TV series during Ramadan have traded in negative tropes and stereotypes about Jewish “treachery” and hostility, so “Jewish Quarter” represented a major departure.)

“I find more tolerance,” said Isaacson, referring to the period since Sisi came to power in 2013. “I find more respect for Israel and more feeling of commonality between Egyptian and Israeli strategic concerns with common attitudes towards Hamas, especially toward the connections between Hamas and other extremist groups.”

Officially, fewer than eight Jews remain in this capital city — all of them elderly women. The community’s leader, Magda Haroun, last month opened the heavily guarded and rarely used Shaar Hashamayim synagogue in downtown Cairo for an interfaith Ramadan Iftar event, the daily break-fast meal during the holy month. (There were some 75,000 Jews in Egypt before 1948, but in the 1950s the Jewish population was largely stripped of citizenship and assets by then President Gamal Abdel Nasser.)

The meeting also coincided with a warming trend between Sisi, the strongman who leads the world’s most populous Arab country, and Israel. In June, Egypt appointed Hazem Khairat as its new ambassador to Tel Aviv. Sisi’s predecessor, Mohamed Morsi, long affiliated with the Muslim Brotherhood, had recalled the previous ambassador in November 2012 after the Israeli Air Force struck and killed a top Hamas military commander and launched an eight-day offensive in the Gaza Strip.

Israel’s war last summer in Gaza threw in sharp relief just how far from favor Hamas, founded as an offshoot of the Muslim Brotherhood, has fallen in official Cairo since Sisi’s ascent to power. (Morsi was removed in a 2013 military takeover orchestrated by Sisi, who became president the following year.) As Israel’s Operation Protective Edge unfolded, Egypt’s state-sanctioned TV stations specifically deployed the term “terrorist” to describe Hamas-launched missile attacks on Israel. And in the wake of increased activity in the Sinai by affiliates of the Islamic State, the Israel Defense Forces’ Southern Command and the Egyptian Army in Sinai are increasingly sharing intelligence on the movement of for-profit weapons smugglers and ideologically motivated militants.

Sisi’s administration has also been widely criticized in the West for clamping down on free speech and press freedoms, and for jailing political opponents. Washington withheld funds and equipment from Egypt after a particularly violent confrontation in August 2013 between government troops and supporters of Morsi, a clash that left more than 600 dead on the streets of Cairo.

In March, President Obama restored most of the $1.3 billion in annual military funding, and the Pentagon resumed shipments of new Harpoon missiles, F-16 fighter jets and replacement kits for Abrams tanks. The Egyptian Air Force’s ability to deploy F-16s allowed government troops to beat back the assault against Sheik Zuweid by Ansar Beit Al Maqdis, an ISIS-affiliated group.

U.S. Secretary of State John Kerry was in Cairo Monday, where he co-chaired a “Strategic Dialogue” meeting with Egypt’s minister of foreign affairs, Sameh Shoukry.

If any one figure in Egypt deserves credit for the contemporary shift in attitudes, perhaps it is Amir Ramses, whose recent two-part documentary project “The Jews of Egypt” and “End of a Journey” explores the rise and demise of the Jewish communities of Cairo and Alexandria between the late 19th century and the middle of the 20th century.

Ramses, a middle-class Muslim from Cairo, battled official censors here under the administrations of both Morsi and Hosni Mubarak, and Islamists were particularly rankled by the documentary’s revisiting of the “Balfour Day” riots instigated by the Muslim Brotherhood in 1945. They coincided with the anniversary of the Balfour Declaration, the 1917 letter declaring Britain’s intention to set up a Jewish homeland in Palestine. Yet last year, Ramses’ films were screened in Egypt to critical acclaim.

Ramses said he was intrigued by stories from his grandparents about Jewish, Greek and Italian neighbors whose different foods and folkways added an international flair to the metropolis — a flair that is now decidedly absent.

“The big picture I am trying to draw,” he said, “is an image of the pre-1952 society through the window of the diversity of a cosmopolitan way of living in Cairo.”