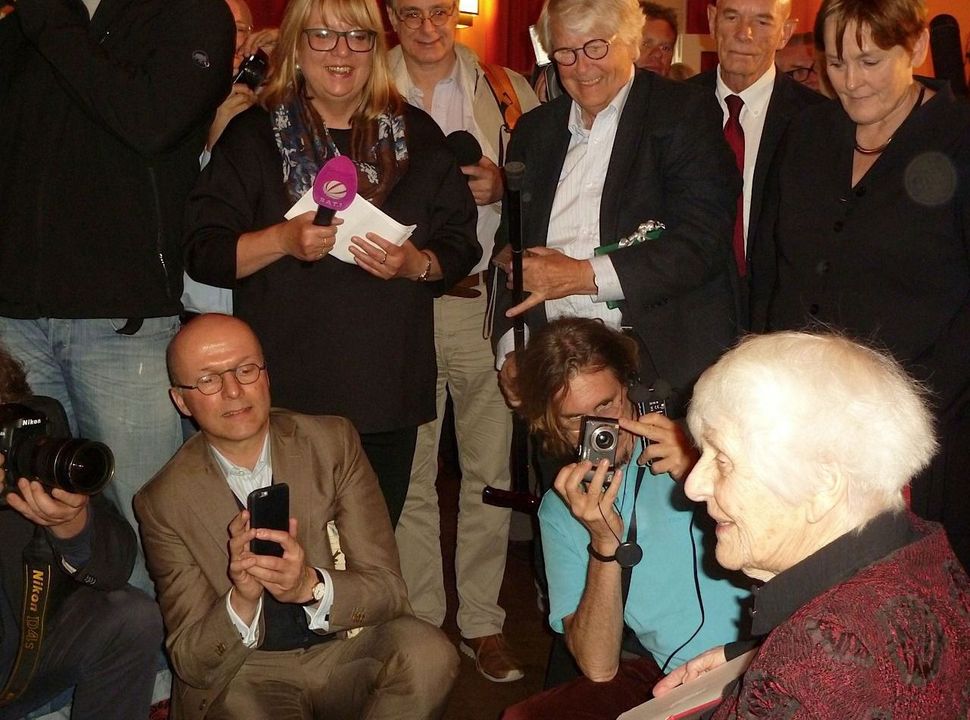 Image by Courtesy of Margaret Shapiro

One day in June, my friend Inge Rapoport received her doctoral degree at a ceremony so newsworthy that the large numbers of journalists stationed in the back of an auditorium at the University of Hamburg Medical School had to be reminded to be quiet. It was an academic ceremony, they were told, not a press conference.

The international press corps was there to witness history. Seventy-seven years after the Nazi regime denied her the right to defend her doctoral thesis, Ingeborg Syllm Rapoport became, at 102 years old, the oldest recipient of a doctorate.

I was there to see my loving, generous friend finally rewarded for her extraordinary life.

We met 24 years ago while I was doing research in East Berlin. It was 1991, and the Berlin Wall had fallen two years earlier. I called her from a pay phone on a corner in Prenzlauer Berg, and in my slow, faulty German explained my project and requested an interview with her.

The project was exploring the lives of three generations of women living in East Berlin before, during and after the fall of the wall. In perfect, unaccented English, Inge responded by asking if I could come to her house in an hour and have kaffee und kuchen with her.

Smiling, I told her how pleased I would be to do so. When I had called other participants for my project, they responded by making more formal appointments at least two weeks in advance.

When I arrived at the Rapoport home in Pankow, an upscale section of East Berlin, a woman who felt like she could have been a relative welcomed me warmly. After a few minutes of answering my questions, she gently said, “Let me tell you a little more about my life,” and proceeded to relate a compelling story.

She grew up in Hamburg and studied medicine at the university. During the Nazi regime, she was forbidden to take her oral exams to complete her medical degree. Her written exam was marked with a yellow stripe to indicate that she could not advance further. Her mother was Jewish, branding Inge as a ”first-degree crossbreed.”

She knew little about being Jewish — she was raised Protestant — but that was not a concern for the Nazis. It was 1938, and she knew she had to leave Germany.

Her first choice was to go to Africa and work with Albert Schweitzer, a doctor she admired greatly, but she was not accepted into his program. Instead she immigrated to Philadelphia, where she worked as an au pair for a minister’s family in Chestnut Hill. This provided her with a home base, some money and a chance to perfect her English. She had passed all of her exams to be a medical doctor in Germany, except her orals, and she was so determined to pursue medicine in America that she applied to 47 schools. Disadvantaged by being a woman, Jewish and needing a scholarship, her only acceptance came from the Women’s Medical College of Pennsylvania in Philadelphia, where she earned a Doctor of Medicine degree in 1942.

As a medical student, she helped deliver babies in a poor, segregated section of the city. She spoke about delivering a baby on the kitchen table of an African-American family with one light bulb hanging from a cord overhead. While talking to me 50 years later, she remembered vividly that there was no glass in the windows and no linens on the beds.

“I saw this horrible poverty and needed to do something about it,” she said.

Eventually she moved to a position at Cincinnati Children’s Hospital Medical Center and met her future husband, an Austrian Jewish doctor, biochemist and civil rights activist named Samuel Mitja Rapoport. He identified as a communist, and she soon agreed that big change was needed to bring about a fairer, more just society. They were both busy physicians and teachers in the late 1940s, and together they had three young children.

I wondered aloud, given her home and professional responsibilities, what being a communist meant, and what her communist or subversive activities were at that time. She responded, “We sang with Pete Seeger and were active in civil rights. We had square dances with black people and delivered a leaflet called the Worker News.”

By 1950, Senator Joseph McCarthy’s communist witch-hunt might have labeled her a ‘Jewish refugee communist doctor’ along with her husband. While at a medical conference in Switzerland, Samuel learned that he would be called before McCarthy’s House Un-American Activities Committee if he returned to the United States, and he worried about losing his American passport. Inge was in Cincinnati with their three young children and pregnant with a fourth.

She quickly packed up and met her husband in Switzerland with the children. They never returned to live in America, though she still speaks of how much she loved it, despite its problems. They spent a year in Vienna, where her husband taught and did research but was denied a permanent position.

Reluctant as they both were to return to Germany, Samuel eventually convinced his wife that they could participate in building the “Neues Deutschland,” the new Germany in the East. They hoped, along with some other returning German Jewish refugees and American communist sympathizers, that this new country of East Germany would be an anti-racist, anti-poverty, socialist democratic society that would provide housing and employment for all its citizens.

“I hoped it would be a different Germany. I thought housing, education and employment would be enough to change a society, but it was not enough,” Inge told me.

Their idealism and devotion to their work sustained them through many difficult years in East Germany. The Rapoports raised their four children, practiced and taught medicine, did scientific research and continued to hope for a better future.

During one of our conversations after the wall fell, Inge acknowledged the corruption and the suppression of personal initiative and creativity. When East and West Germany were unified in 1990, she found it hard to believe she was back in a united Germany, the country that had expelled her 52 years earlier. “I never thought I would be living back here,” she said.

Before the academic ceremony, she told me she wished that all the attention was less on her age and more on righting the injustices that had denied so much to so many during the Nazi period. Given her energy, intelligence, principles and life experience, it is not surprising she could not only pass her oral exams at 102, but also comment publicly after receiving her degree that “obtaining this degree is about the principle, not only about me.”

Inge entered the hall on the arm of the dean of the medical school, preceded by members of a jazz trio. As the ceremony ended, she walked unaided to the musicians to thank and shake hands with each one.

Margaret Shapiro, LCSW, MFT, is a psychotherapist in Philadelphia.