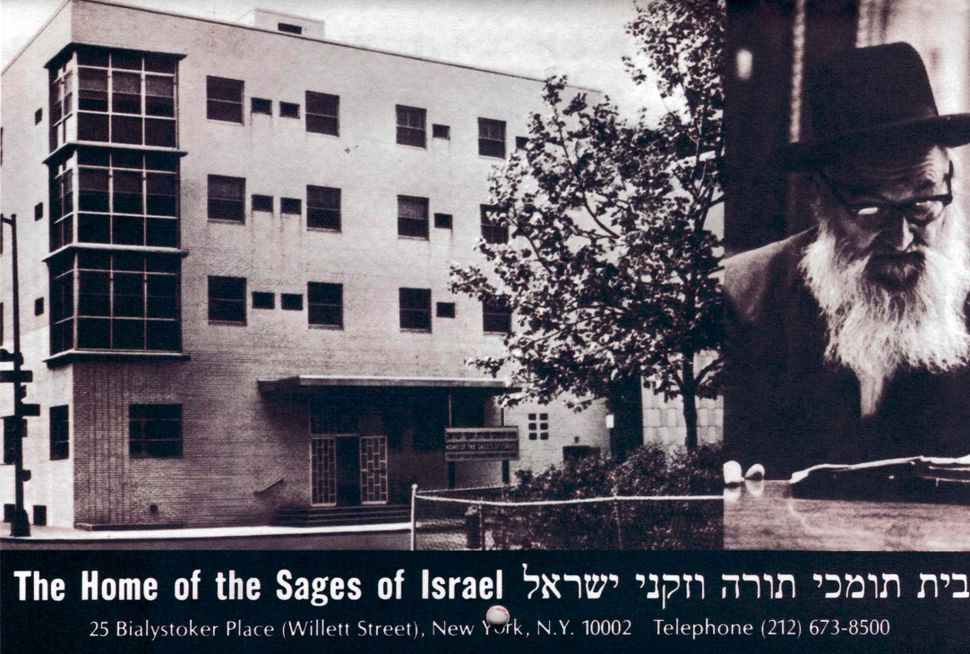 Outdated: Home of the Sages no longer operates a nursing home. The cover of its fundraising calendar from last year implied otherwise, donors say.

Donors to a charity on Manhattan’s Lower East Side are claiming that they have been misled by a Jewish calendar mailed annually to thousands of homes.

The calendar, illustrated with images of old bearded rabbis and filled with pleas for donations, is a fundraising appeal that an Orthodox charity called the Home of the Sages of Israel distributes in the weeks before the start of each Jewish new year.

“As you turn the pages of this Calendar, look well at the faces of the Aged Sages and Scholars for whom we care,” reads the latest calendar, which arrived in mailboxes in July. “Won’t you extend a helping hand to your old sages?”

Recipients appear to respond to the solicitations en masse: The group raises around $500,000 a year from donors, according to tax filings. Yet three donors have now filed papers in New York State Supreme Court saying that they thought the calendar was asking for money for the nursing home that Home of the Sages opened in the 1960s. In fact, the charity has not operated the nursing home since 1996.

“It’s obvious to anyone that sees that calendar… that they’re making people believe that they’re still running a nursing home for elderly people,” said David Jaroslawicz, an attorney with the firm Jaroslawicz & Jaros LLC, who is representing a group of Lower East Side residents who have been attempting to block the Home of the Sages from selling its Lower East Side building. 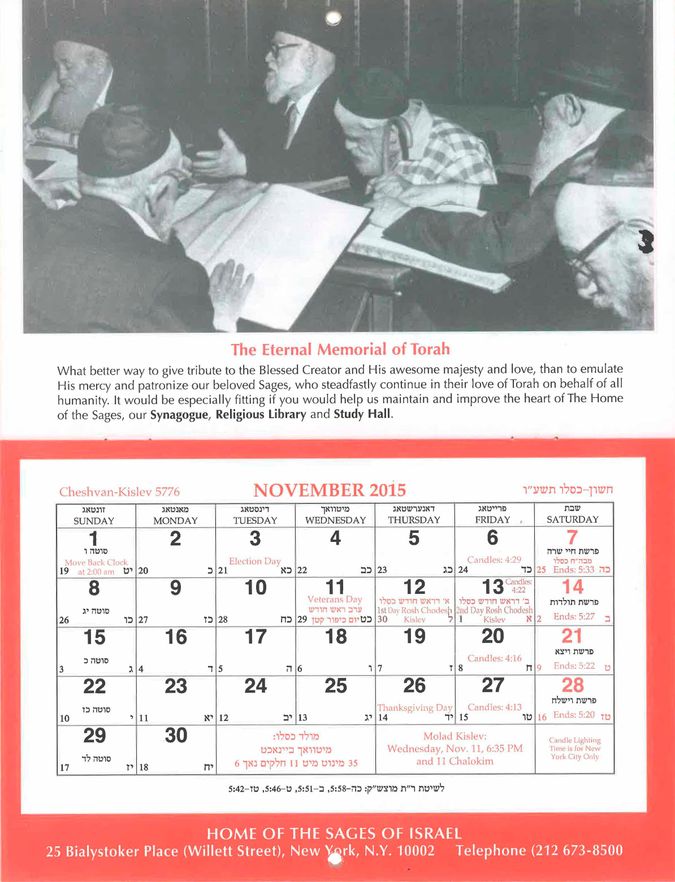 Old Rabbis: The latest fundraising calendar from the Home of the Sages is full of old pictures of bearded rabbis.

Since selling its nursing home business and leasing its building to a for-profit company in 1996, the Home of the Sages has continued to operate a kollel, or center for religious study, for elderly rabbis in a room at the old nursing home. Yet the former donors claim not to have been aware of the change, citing unclear language and outdated photos in the fundraising appeals. In a letter to the court, attorney Kenneth Gelnick called the fundraising literature “at best misleading and deceptive.”

The donors’ claims come in the midst of a roiling fight over the Home of the Sages’ effort to sell its building, which drew widespread press attention in April. Lower East Side residents, led by developer Baruch Singer, oppose the sale. Gelnick, for his part, is attempting to intervene in that legal dispute on behalf of two former donors, aiming, in part, to recover donations from the sale’s anticipated proceeds.

A relic of the 1960s, the Home of the Sages has seen the evaporation of the Lower East Side community it once served. The owner of a tired-looking pale brick building across Bialystoker Place from a scraggly park, the charity itself says that demand for its services is less urgent today. It leased its nursing home to a private company in 1996; the last Orthodox Jewish man living there died in 2014. In court filings, the Home of the Sages said that few locals use the chapel in the nursing home building.

The fundraising calendar, meanwhile, is vague about how dollars donated today are spent. “Please remember that although these distinctive men are on a lofty spiritual summit, they are human and still need to provide for themselves and their loved ones,” reads a pamphlet sent with the 2015–2016 calendar and signed by Rabbi Samuel Aschkenazi, the group’s president. “Your gift this year can empower them to continue achieving their spiritual growth without sacrificing their physical comforts.”

What this means, according to filings in the court proceedings and to Scharf, is that the charity brings old Orthodox men, many of whom live in Brooklyn, to study and pray at the kollel in the Bialystoker Place building. A court filing by a Home of the Sages trustee named Meir Kagan says that there are 11 of these men; Scharf wrote in an email that there are “typically 18 to 20.”

The Home of the Sages “pays for the sages to travel to and from their homes to the kollel and pays for their meals,” Scharf wrote. In addition to other expenses, Scharf said that the Home of the Sages brings lecturers to speak at the kollel and pays a rabbi for a synagogue that shares space with the kollel. In its latest tax filings, the charity reports spending $194,000 of its $685,000 in expenses on salaries and wages, $143,000 on “printing and publications,” and $88,000 on grants to other charities. Other funds are spent on office expenses, benefits, “religious & memorial services,” and “miscellaneous charity,” among other expenses.

In court papers, former donors say they believe that the calendar solicitations misled them. “I am shocked and dismayed to learn that no sages have lived in the Home since 1996 and that the photographs in the calendar do not depict the current residents nor the current condition of the building,” read affirmations signed by Samuel Block and Louis Atlas, Bronx residents who say they have donated to the Home of the Sages. Gelnick filed the affirmations. 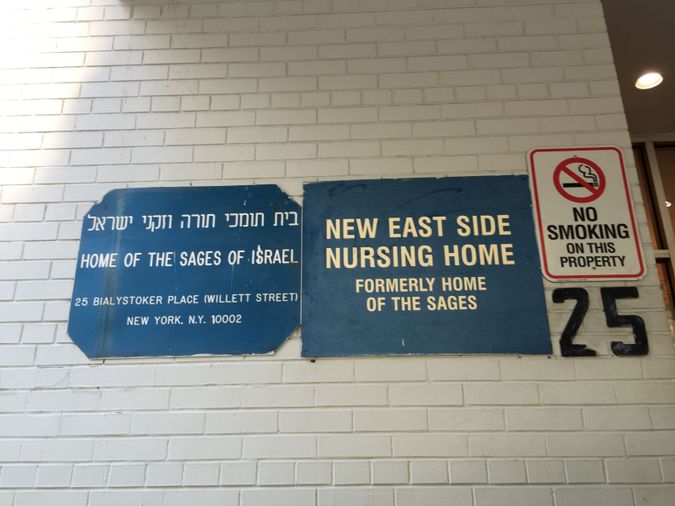 Nursing Home: Today, a placard at the Lower East Side building identifies it as New East Side Nursing Home. Image by Josh Nathan-Kazis

The Home of the Sages sent out its latest annual appeal in July, asking again for a “helping hand” — even though it has already told the court that it plans to give away $10 million of the $13 million purchase price from the proposed sale of its Lower East Side building to Friends of Mosdot Goor, an unrelated charity. Jaroslawicz told the Forward that he had sent a complaint about the latest appeal to the Office of the New York State Attorney General.

When questioned about the propriety of asking for donations while planning to hand off $10 million of the proceeds from the sale to Friends of Mosdot Goor, which is expected to use the funds to build a synagogue in Israel, Scharf noted that the New York State Attorney General had “found nothing improper” with the donation. “Recipients of the calendars are free to make their own decisions, based on all publicly available information, as to whether to support the [Home of the Sages’] continuing activities with donations,” Scharf wrote.

Gelnick, for his part, continues to push his case. “The calendars speak for themselves,” he said.