In an Education Reform Battlefield, Hebrew Charters Are at the Forefront 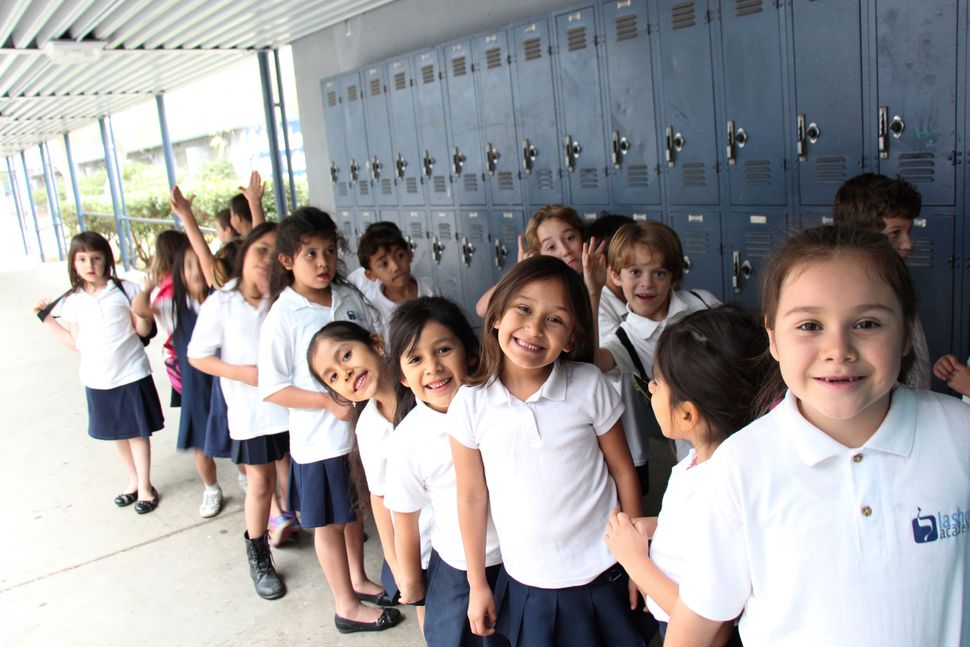 Fresh Faces: Students at the young Lashon Academy, which is entering its third year as a dual-language Hebrew charter school in Los Angeles, California. Image by Courtesy of Lashon Academy

In a country where residential ZIP codes have long dictated public school zoning, the education reform movement in recent years has also brought to the forefront a notion of school choice in which families can decide where to send their children to school on public dollars, regardless of where they live.

Charter schools, which are publicly funded but privately run, have expanded across the country, most notably through large networks like KIPP Public Charter Schools, Aspire Public Schools, Insight Schools and IDEA Public Schools. Congruently, states are increasingly pressured to allocate more public dollars toward private school vouchers or charter schools in the face of parental fears that the American public education system is on the decline.

With that national charter growth, a handful of Hebrew charter schools have sprouted just within the past several years, particularly with the support of the Hebrew Charter School Center. The New York City-based not-for-profit organization was founded in 2009 to foster the growth of Hebrew-language charter schools and to provide resources and assistance to continue improving and expanding those schools.

The first HCSC-supported school opened in Brooklyn in 2009, with about 150 students in kindergarten through first grade. For the 2015–2016 school year, the center is expecting to serve about 1,700 students in pre-K through sixth grade across nine schools in Brooklyn; Manhattan’s Harlem; New Jersey; Washington, D.C.; San Diego; Los Angeles, and Minneapolis. The goal is to open 30 schools within the next decade to serve more than 12,000 students annually, HCSC President and CEO Jon Rosenberg said.

HCSC schools seek to educate students in a secular, Hebrew-language partial-immersion environment that is focused on diversity. As a new member of the National Coalition of Diverse Charter Schools, Rosenberg said HCSC leaders believe that charter schools play a key role in creating integrated schools of choice.

“There is growing recognition in the United States that you can teach modern Hebrew and about Israel in an entirely secular public school context, in the same way that you can teach Mandarin at a school without embracing Buddhism, or Greek without a school being a Greek Orthodox school,” Rosenberg said.

But it hasn’t always been easy to make it clear to the public that there is a distinct separation of church and state in the publicly funded Hebrew charter schools.

Lashon Academy — now a K-3 school — opened in Los Angeles’s Van Nuys area in 2013, to some concern in the community that the dual-language school would blur a line between public and private schools, a common criticism among charter school foes. Further, the distinction between an education in the Hebrew language and Judaism is something to which Lashon’s principal, Sara Garcia, still answers.

“We had parents on both end of the spectrum. Some asked, ‘What do you mean you’re not teaching Rosh Hashanah or doing a Seder activity?’ Others on the other end were just trying to understand what it meant to teach Hebrew,” Garcia said. “We’re still explaining to parents that we’re not a religious school. We don’t celebrate Jewish holidays and don’t teach religion in any aspect. But we teach the culture of Israel and understanding Israel. Even if you go to a school that teaches Mandarin or Spanish, it’s just the language.”

Lashon students receive a core hour of Hebrew instruction every day, while the rest of their coursework in subjects like art and physical education can be taught in Hebrew. And it focuses on serving a diverse community: the student body comprises almost 60% Israeli-American students and 40% Hispanic students. At New York City’s Harlem Hebrew Language Academy, the student body is 40% white, 36% black, 20% Hispanic and 4% multiracial. More than half of HHLA’s students receive free and reduced-price lunch.

For families zoned to public schools that are either subpar or simply don’t meet their children’s educational needs, the notion of school choice and the promise of academic rigor are enough of a draw, Rosenberg said. Families are also looking for racial and economic diversity and the opportunity to learn a second language. Studies have shown that bilingual individuals are able to think and experience the world differently depending on the language they use, and they can increase academic achievement and improve attitudes and beliefs about other cultures. Specifically, HHLA also helps students develop a strong sense of social and civic responsibility through the integration of community service, said the organization’s principal, Robin Natman.

Hebrew is also a difficult language; while it’s easier than Mandarin or Arabic, it’s harder than German or French for English speakers, Rosenberg said. As students learn Hebrew, they also develop abilities to overcome challenges, as well as open doors to opportunities that would require Hebrew.

“While Hebrew is not one of the more widely spoken world languages, it is spoken by millions of people around the world,” Rosenberg said. “It doesn’t make sense for every American student to learn Mandarin, despite China’s importance. Israel is a significant economic power, with excellence in technology, entrepreneurship and post-secondary education, among other areas.”

Even with the general success Hebrew charters have seen thus far, there are a few wrinkles to iron out at Lashon — as with any new school.

The question of accountability is a persistent issue in the school choice debate, as charters aren’t necessarily required to be held to the same standards as traditional public schools. Many charter schools across the country have faced scrutiny, or been shuttered, for mismanagement and poor performance.

But at Lashon, accountability comes both from the top and in the classroom in a way that Garcia likens to the Common Core State Standards Initiative. The school has language academic standards as well as growth, summative and formative assessments given throughout the year to measure proficiency based on set benchmarks. A final assessment at the end of the year allows the school to track student progress year after year. Even kindergarteners taking writing exams are expected to be able to write a full paragraph by year’s end. And in the school’s first year, the graduating kindergarten class rose to the challenge, Garcia said.

While all students showed progress in Hebrew language — since all the students in the school’s inaugural year started Hebrew at ground zero — and the kindergarteners and first-graders all improved reading levels, Lashon’s first year of second-graders struggled. Since the older students were attending Lashon with other academic experiences behind them, they entered at varying levels of proficiency, and Lashon educators had to figure out how to best accommodate all levels.

“But now that we understand our population, we can make tweaks and changes in our curriculum and get a better hold on that,” Garcia said.

“Hebrew is increasingly becoming relevant in the tech world, and in international business, so our students having this proficiency in Hebrew, along with a knowledge of Israeli culture, will be an asset to them in the future,” she said. “We are creating students who will easily and confidently be able to take their place in the global world of the future.”

In an Education Reform Battlefield, Hebrew Charters Are at the Forefront