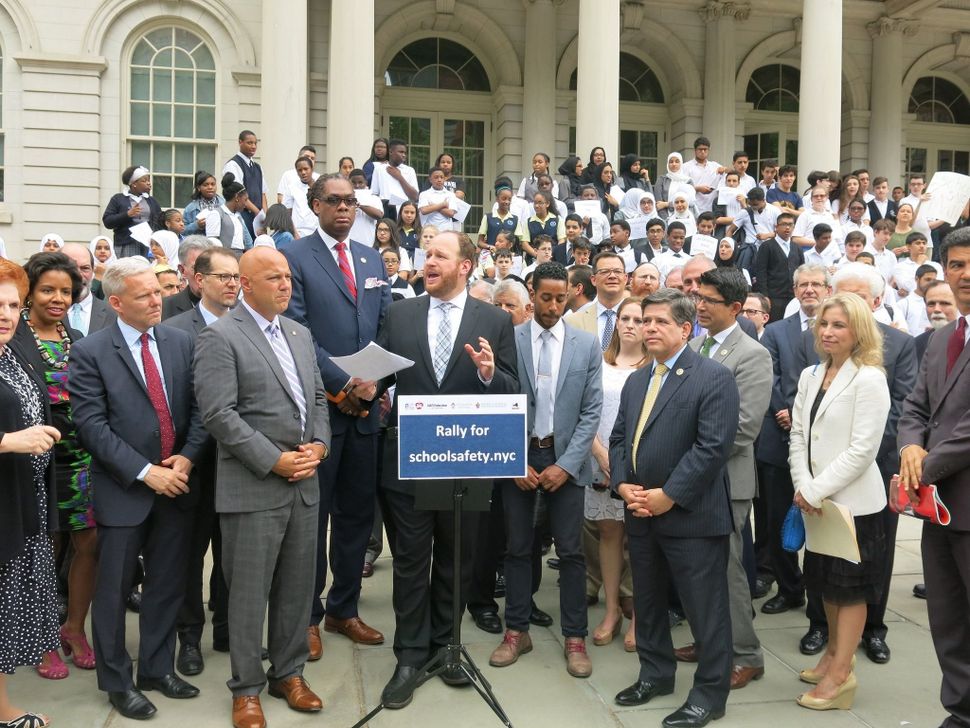 Rallying for Safety: Councilman David Greenfield joined students, public advocates, and city council members at a rally for school safety in May. Image by Courtesy of David Greenfield

Just in time for back-to-school this fall, a New York politician is trying to pass a bill that would require Mayor Bill de Blasio to fund the same security in private schools that public schools have access to already.

City Councilman David Greenfield sponsored the bill, known as Intro 65, to address what he saw as an obvious hole in security: Public schools deploy their New York Police Department school-safety agents at the city’s expense, while nonpublic schools – secular, religious and everything in between – must either pay out-of-pocket or forego security personnel and hope for the best.

“Unfortunately, over the last few years, the need has grown,” said Greenfield, who originally introduced this bill several years ago. “According to the U.S. Department of Homeland Security, we’ve seen that there are more lone-wolf terror attacks — and, unfortunately, schools are soft targets. Especially in the cases of Jewish and Muslim schools. So if we can harden the targets, that’s important.”

There has been a rise in shooting sprees at schools at home and abroad in recent years. In 2012, three children were shot dead at a Jewish school in Toulouse, France, and that same year, gunman Adam Lanza killed 20 children at Sandy Hook Elementary School in Newtown, Connecticut. In 2014, Taliban terrorists shot 145 people in a modern Islamic school in Peshawar, Pakistan. And that’s to say nothing of other “soft target attacks” like Charlie Hebdo, July’s shootings in Chattanooga as well as the recent massacres at a Charleston church and a Colorado movie theater.

“This legislation is pretty much common sense,” Greenfield said. But de Blasio and Democratic critics didn’t agree, at least not when the bill was initially proposed at an April hearing.

Opponents on the left expressed concern that planting security guards in schools would promote what’s known as a “school-to-prison pipeline” — the idea that there’s a conduit between schools and jails, and that those students who have considerable interaction with the police are more likely to engage in criminal behavior later on.

“There were a few high-profile cases and a smatter[ing] of incidents — in Park Slope, for example — that have made the news as a conflict between a student in a public school and an NYPD school-safety officer, leading to the student being arrested or fined,” said Jake Adler, New York policy director for New York for the Orthodox Union Advocacy Center, a group backing the Intro 65 bill. “So in the council, there is a certain amount of hesitation to put more of these personnel into schools.”

The $51 million dollar cost of the project was also a consideration for voters and politicians alike.

Now, four months after Intro 65 was first introduced, the council is working to tweak the language of the bill in a way that may appease opponents — and help the legislation pass — before the start of the academic year. The most significant difference between the initial bill and this amended one is simply the uniform: Schools would now employ union security guards instead of the NYPD school-safety agents stationed in public schools.

“We did have concerns from folks in different communities who preferred not to have NYPD school-safety agents, and we think that by changing these to union security guards, we address those concerns,” Greenfield told the Forward. “We guarantee that those are good-paying jobs, and we also limit the cost of the proposal to approximately $39 million per year. So these changes should give us wall-to-wall support within the various communities.”

Ninety percent of the council — 45 of 50 members — already supports Intro 65. In fact, there’s more support for this legislation than for any other piece of legislation currently in the council, according to Greenfield. And if there continues to be pushback, “It’s on the mayor to explain why he thinks the safety of schoolchildren isn’t important,” Greenfield said.

These union security guards would be stationed at the front doors of the schools to monitor who comes in and who goes out. “I think it’ll be similar to any other private armed security person you’d see at a bank or at a mall,” Adler said. But none of the guards would have guns, which raises questions about how much they’d actually be able to do in case of an emergency.

“We’ve heard everything, like ‘What are they going to do, stop a terrorist?’ ” Adler said. “But there’s a middle ground between expecting our schools to turn into armed encampments like they are in France, with assault or military-style rifles — turning our kids into fortress-dwellers — and having another person with an extra pair of eyes and ears monitoring the doors and security cameras, and making sure people belong there — and if they don’t, escorting them out.”

“Every security expert says that having a security guard in front of an institution will prevent 90 percent of attacks,” Greenfield said, adding that while the potential of attack is always very serious, the guards are also meant to monitor crime, theft and incidents of students getting into fights. “There’s been debate about this in the community, but the consensus is that we don’t want firearms in our schools, and public schools adhere to that as well.”

Bills similar to Intro 65 have also been introduced in neighboring states. This past June, Bill A4288, legislation that would provide security funding for private and parochial schools in New Jersey, passed an initial vote before the State Assembly’s Education Committee. (The bill, co-sponsored by Assemblyman Gary Schaer, is less about security guards and geared more towards security improvements, like surveillance cameras and stronger locks.) The Orthodox Union, one group backing Intro 65 in New York, is simultaneously pushing for A4288 across the bridge.

This second proposal of the bill is on the agenda for a stated hearing August 20, and the council will vote on the amended legislation. While it’s unclear how many schools would ultimately use the funding, if the bill passes, implementation should take roughly 60 to 120 days, according to Adler. So come October or November, New York City’s religious and nonreligious private schools might just have an extra pair of eyes and ears out front.