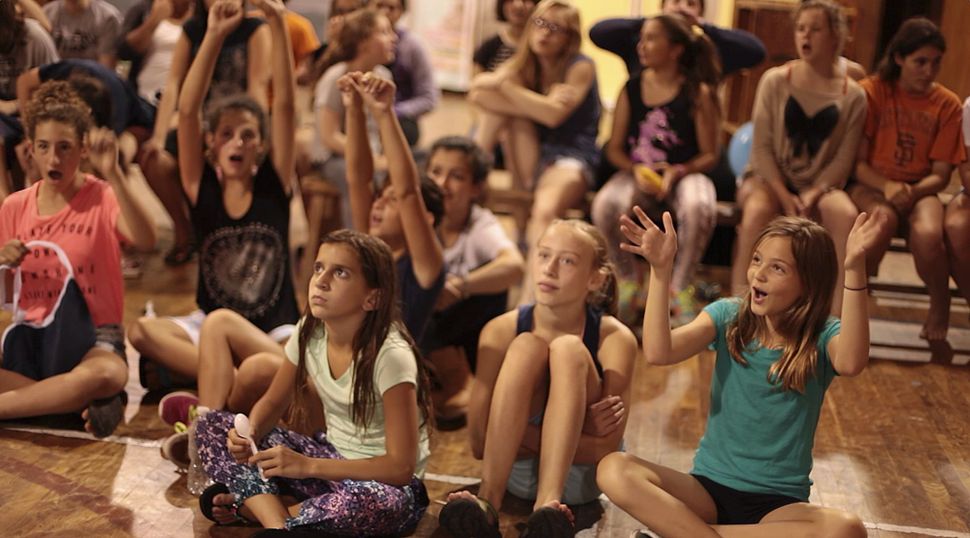 About 2 miles west of the Delaware River, eight deaf Jewish girls sit circled on a gym floor, tossing plastic fruits and vegetables at each other.

Zissy Moskowitz, one of two interpreters for the group, walks around the circle, taking pictures for a blog the girls’ parents have been following for two weeks now. Moskowitz, dressed modestly in an ankle-length skirt and long sleeves, explains that today’s lesson is about brachot, or blessings. On lap-sized whiteboards, the girls classify foods that get the same blessing: grains, earth growers, tree growers, meats, etc. Hence the flying eggplants and breadsticks.

Suddenly, one of the two counselors sitting in the circle bangs her hands on the ground loud enough to silence a rambunctious classroom. No one flinches. Foods continue to fly. Moskowitz explains that the counselor was just trying to catch the eye of a specific girl across the circle. The noise was secondary. It was the visual of her hands going up-down, up-down, in big sweeps that attracts the girl’s attention.

Camp Gan Israel in the Poconos, where the girls are located, is not a camp for the deaf. A Lubavitcher named Gershon Sandler founded it in 2012 as a “bat-mitzvah camp,” and it has since grown to accommodate 60 girls, ages 8 to 14.

It was only this past March that deafness popped on Sandler’s radar for the first time. Yehoshua Soudakoff, a 24-year-old Lubavitcher living in the Crown Heights section of Brooklyn, was looking to expand a successful deaf Jewish boys’ summer camp program he founded the previous summer.

“People were telling me: ‘You have a boys’ camp. Where’s the girls camp?’” Soudakoff said.

The Chabad community connected the two, and Sandler offered Soudakoff one of his extra cabins.

Integrating hearing and deaf kids within any space, though — let alone a camp where everyone shares showers and three meals daily — isn’t easy. But at Gan Israel, Soudakoff appears to have as much latitude as he needs to run his own program. The deaf girls mostly have their own programming, their own table at meals and their own cabin — Bunk 6. And yet they were also just eight of 68.

After the brachot lesson, Bunk 6 headed to the art room to work with Hinda Kasher, their 26-year-old deaf art teacher. Kasher, who recently received a Bachelor of Fine Arts from Rochester Institute of Technology, was helping the girls make Picasso-styled self-portraits that illustrate deaf and Jewish themes. The hands in every portrait are as big as the faces. And Kasher says each is signing a unique piece of Jewish culture.

The girls range in age from 7 to 16, and hail from anywhere from Maryland to Israel. Five were born profoundly deaf, and three are hard of hearing and wear implants. Even though 90% of deaf children are born to hearing parents, all eight girls have deaf parents, and some have deaf grandparents and great-grandparents. Most have jumped around many schools, some as many as six. Six speak American Sign Language and two speak Israeli Sign Language. Knowing ASL does not imply one knows ISL; there are more than 160 different sign languages in the world.

When Kasher wants all the girls’ attention, she flickers the lights. 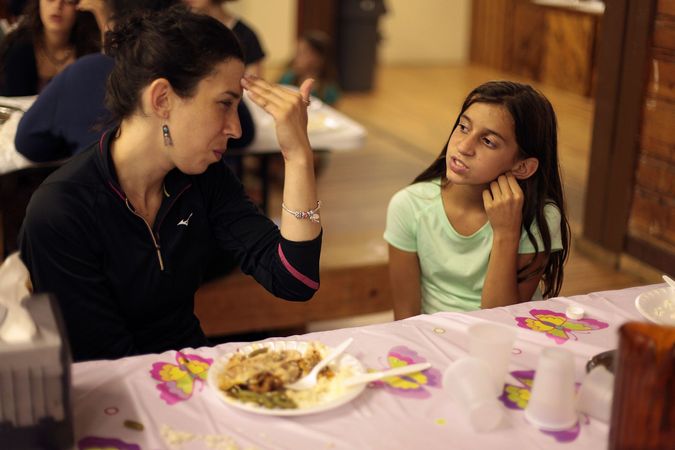 On a bunk porch, Ariella Zfati, a deaf eighth-grader from Maryland, was with Moskowitz and the second interpreter, Miriam Kramer. Ariella wore a purple paint-splattered sweatshirt and stared defiantly into the camera lens aimed at her face.

Eye contact was superfluous. Ariella never shifted her gaze from Moskowitz as she translated words into signs, and then Ariella’s answer from signs into words.

Was there anything getting lost in translation? Moskowitz admitted that translation is an inherently messy business and that some of Ariella’s message was likely getting dropped between her hands and Moskowitz’s mouth (this is even truer when translating from spoken English to ASL to ISL for the two Israeli girls). But she also said interpreting is a trained skill, and one can learn.

And with only two interpreters, there are inevitable moments of frustration and awkwardness when the kids must come up with creative ways to communicate with each other.

Ariella said the most frustrating part about interacting with the hearing community is that they give up too easily when communication starts breaking down.

“It’s important for me to know what you’re saying,” Ariella said. “So just repeat yourself if necessary, but don’t just give up. If you want to communicate with me, find someone who can maybe interpret, or if I miss something just don’t give up, don’t just walk away from me.”

Soudakoff sported a long, wiry black beard that afternoon. When he talks, though, he sticks out his tongue playfully, like he’s still a boy. But he’s 24 years old, and he founded The Jewish Deaf Foundation in 2010, when he was barely 20.

Soudakoff describes himself as an “L.A. boy” who’s deaf himself and grew up in an all-deaf household where the “living room was like the deaf campus.” He said the idea to start a Jewish deaf summer camp came after he moved to Crown Heights and met an elderly Russian Jew.

“He said, ‘You need to do something for the Russian Jewish deaf kids.’ I thought: ‘I don’t really know Russian. I don’t speak Russian. I never have been to Russia. Let me try to learn.’” Soudakoff said.

So he partnered with a Chabad camp in Russia, and launched the world’s first deaf Jewish summer program in 2013. And then came the boys’ camp in the United States, and now the girls’ camp.

Back at the gym for the day’s integrated activity, all the girls sat with their respective bunks. Bunk 6 is on the floor up front. With Moskowitz interpreting, a counselor explained the rules of a game called ‘Minute to Win It’. Soon the girls were competing: balancing marshmallows on their Vaseline-covered noses, building plastic cup pyramids, apple bobbing; pump-up music blasted from a nearby speaker, and 50 girls cheered so loudly, it sounded like someone was screaming directly in my ear.

But silence from Bunk 6. Bunk 6 sat, wide-eyed, staring at Ariella as she tried to spoon ping pong balls from one bowl to another with her mouth. The girls were completely silent, almost willing her with their eyes. Moskowitz swished her hand in rhythm with the cheer to try and get the girls to join in, but they didn’t. Why would they? Cheering, at least audibly, is a waste of energy.

At dinner I sat down next to Ariella. I wanted to ask her about what hard-of-hearing sounds like, and about her family. But I felt shut-out without an interpreter. The girls conversed around me silently, and I could not figure out the source of their giggles. My voice was useless. And writing my questions seemed terribly insufficient. I focused on my chicken.

I realized I was living the exact situation Ariella described earlier. As social animals, most humans loathe awkward conversation. We often fear being misunderstood. Rather than risk discomfort, we sometimes choose simply not to engage.

Ariella tapped my shoulder and pointed at her friend Noy at the end of the table. Noy signed and mouthed something to me, but I didn’t follow. I looked around desperately for help. She smiled patiently and tried again.

“How old am I?” I mouthed back, guessing.

She nodded. I signed “20” with my hands. I felt bold, and asked her a question, mouthing slowly. Soon enough, we were having a conversation.