How Poetry, Prison and a Holocaust Book Are Changing Ex-Offenders’ Lives 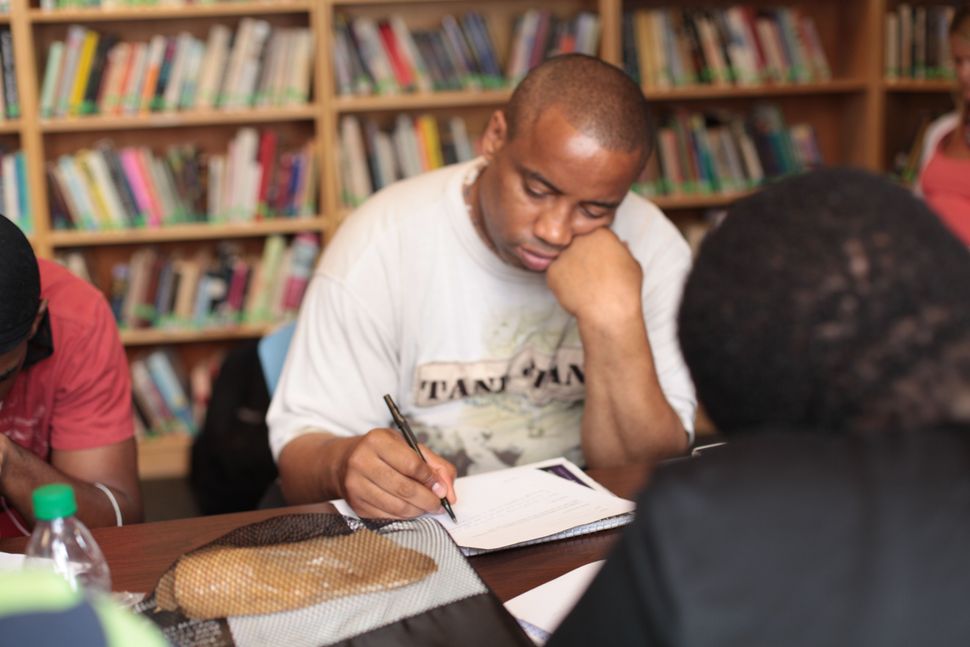 It was a Wednesday afternoon at the The Fortune Society, a social service organization for ex-offenders, and a group of men and women — all either formerly incarcerated or part of an Alternative to Incarceration program — sat together for their biweekly writing workshop, notepads and pens at the ready.

Words spitballed quickly and easily throughout the classroom. Donald Gray delivered a spoken-word performance on his 18 years of sobriety. Julian Mccullers shared a love poem. “You should show that to her!” one student called out amid applause. David Rothenberg, The Fortune Society’s founder, quickly stepped in. “Sometimes it’s scary to express yourself to someone.” he said. “That’s why writing it out is good.”

Later, Rothenberg sat in the lobby, adjacent to a group of retired women performing mock interviews with ex-offenders, and emphasized just how important self-expression can be for his clients.

“They were the kids who were overlooked. They came from dysfunctional families, couldn’t adapt to large classrooms, were disruptive,” he said. “School was where they didn’t belong.” His challenge, he realized, was to create a very different atmosphere in which they could learn.

Rothenberg, a former Broadway press agent and producer, founded The Fortune Society after producing the 1967 play “Fortune and Men’s Eyes,” a drama on the horrors of prison life. He began connecting with ex-offenders, inviting them to give talkbacks after performances, and quickly realized they were what he called “an invisible, voiceless population.”

“They have to go through all these classes on anger management and drugs and alcohol, and it’s a strain,” he explained. “When we have acting classes or music classes or writing classes, they learn to find ways to express themselves.”

Rothenberg pointed to “Unapologetic,” a poem on slavery and oppression, performed by a student earlier that day. He shook his head with admiration. “It was such an angry poem,” he said. “But isn’t it great that she got it out here instead of acting it out?”

Frustration, it seems, often underlie a lot of the students’ desire to write. For Kiara Sanchez, a 17-year-old client at The Fortune Society, it was an outlet to express herself.

“I feel like throughout my years in life I don’t get heard. In families, in relationships,” she said. “I write, usually out of anger. I need to get it out.”

Before deciding to pursue her GED at The Fortune Society, Sanchez said her education had been at a standstill. She transferred in and out of different high schools, saying she always ended up falling in with the wrong crowd. That day, she wrote about digging herself out of a hole.

Rothenberg is quick to point out that the power of the written word can find its place behind bars, too. He referenced “Man’s Search for Meaning,” a memoir by Holocaust survivor Viktor Frankl, as one of the most popular works read in prison. “Frankl wrote a book about how he survived in a concentration camp because he was a therapist and he was able to work,” Rothenberg said. “And he didn’t go mad the way that other people were going mad.”

Rothenberg stood up and began to walk around, asking his staff, composed mostly of ex-offenders, if they had read Frankl’s book while in jail.

The answer was a resounding “Yes.”

Osi Gerald, a former Fortune Society client and current staff member, sat down and recalled the much-needed comfort Frankl provided for him while behind bars.

“Education in prison is nothing. There’s no degrees, no nothing,” he explained. “My counselor gave me Viktor Frankl. I read it and I thought, wow, he dealt with this and he came through.”

Michael Brundidge, Fortune Society’s manager of business services, agreed: “I had to find something to keep me going, to keep my spirits up. Being in solitary confinement 23 hours a day, no interaction with people, that’s really hard on you.”

His discovery of Frankl’s work, he said, gave him a new perspective.

Thea Glassman is a Multimedia Fellow at The Forward. Contact her at [email protected]

How Poetry, Prison and a Holocaust Book Are Changing Ex-Offenders’ Lives