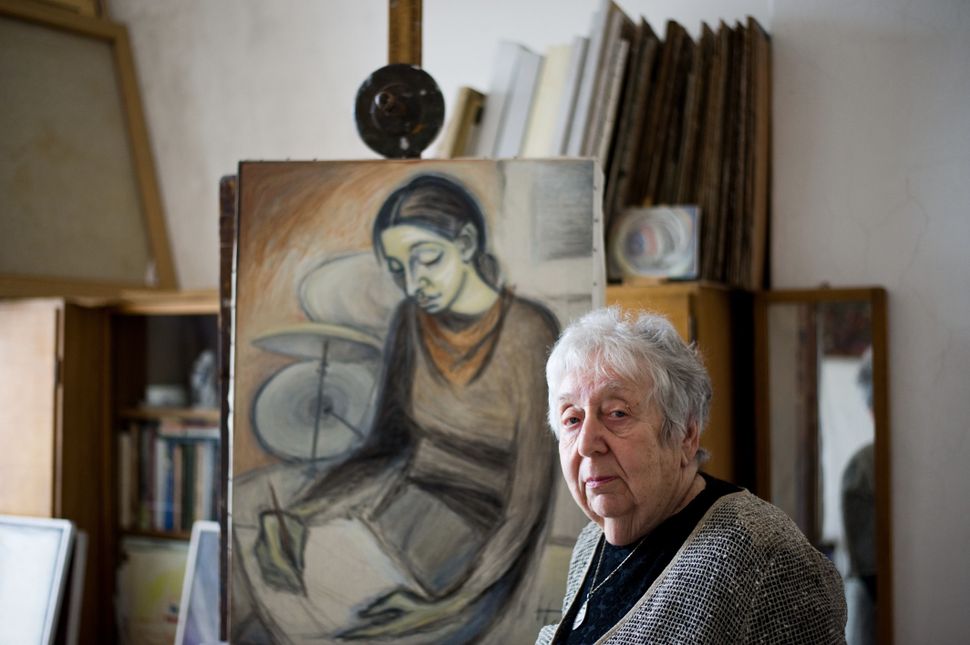 Not a Cymbalist: Helga Weiss-Hoskova at home in Prague in front of one of her pieces of art. Image by Matej Stransky

Helga Weiss-Hoskova, a short woman with closely cropped gray hair and sparkling blue eyes, stood in the doorway of her fourth-floor walkup in Prague.

“I climb these stairs once or twice each day,” she said as my wife and I, out of breath, approached the fourth-floor landing.

The 85-year-old artist and Holocaust survivor has received international acclaim for her drawings of life she created inside the Terezin concentration camp while she was imprisoned there. Later she published a book, “Helga’s Diary” (translated and expanded in English in 2013), which chronicles a 12-year-old schoolgirl’s will to survive the Nazi brutality of Terezin, Auschwitz and Mauthausen.

Tens of thousands of Jews died from malnutrition and disease in Terezin, a camp 35 miles northwest of Prague that was known, and referred to by the Nazis, as Theresienstadt. Others were shipped to the Auschwitz and Treblinka death camps.

Today, 70 years after her liberation, Weiss-Hoskova is actively campaigning to convert the railroad station from which the Jews of Prague, including her family, were deported to Terezin into a museum that will preserve the memory of what happened in this place. She also talks about the Holocaust with Czech and German schoolchildren. “It is a responsibility to counter the deniers,” she said. “I speak in the name of those who are not able to speak.”

We followed Weiss-Hoskova into her book-filled apartment, its walls covered with her paintings and a large poster of her granddaughter, Dominika Weiss, a famous cellist. During our visit she sat on a brown couch with three pillows that neighbors saved during the war. She wore a brownish-green pullover, dark-brown trousers and a silver necklace with a stone shaped like a butterfly wing.

“I adore butterflies,” she said. “They mean freedom to me.”

Weiss-Hoskova recalled an oft-anthologized poem by a fellow Terezin inmate named Pavel Friedmann, who died in Auschwitz in 1944: “Only I never saw another butterfly. / That butterfly was the last one. / Butterflies don’t live in here, in the ghetto.”

It’s a poem I’ve heard often, but quoted by a Terezin survivor the words had an edge of authentic recollection quite different from their solemn recitation on memorial occasions.

The poem suggests there are no butterflies where misery is pervasive and where there is no freedom. Proclaiming freedom, all kinds of butterflies adorn Weiss-Hoskova’s living space.

“I was born in this apartment, and all my memories are here,” Weiss-Hoskova said, glancing at the burning yahrzeit candle that marks the 12th anniversary of her husband’s death.

She wonders why she survived. Fifteen thousand Jewish children passed through Terezin between 1942 and 1945, and only 100 survived. “Why was I chosen?” she asked. “Just me?”

Her happy childhood ended on December 4, 1941, when the Nazis deported her family to Terezin. Her parents were required to sign a document in which they declared that they were voluntarily vacating the apartment and surrendering their keys.

Young Helga, who had always liked to draw, included crayons and watercolors among the 100 pounds of possessions permitted each family. Eager to please her father (the men and women were segregated), she had smuggled to him a picture of children building a snowman. Her father wrote back: “Draw what you see.”

At her father’s directive, Helga drew inmates ravaged by disease and hunger and crammed into tight quarters. She and 33 other girls lived in one room that was infested with bedbugs and fleas.

She saw her father for the last time on September 29, 1944, when he boarded a train, presumably to a death camp. “He waved and tried to smile,” Weiss-Hoskova recalled. “It was more like a grimace.”

After three years in Terezin, she and her mother were sent to Auschwitz. They waited on the selection platform for the SS officer’s life-or-death pronouncement.

“I asked God, ‘If I have to die, don’t let me die later than my mother,’” she said, noting her unfamiliarity with prayer to God. “When you are in such a terrible situation, you need to call out to someone.” She was raised in a secular home.

She and her mother were spared to become slave laborers. Their ultimate destination was Mauthausen, 12 miles east of Linz, Austria, a camp designed to exterminate prisoners through hard labor in rock quarries.

American troops liberated Mauthausen on May 5, 1945. Emaciated, mother and daughter were given food and medical treatment before being sent back to Prague on May 29.

“We arrived at night, but our joy turned to sadness because we didn’t have a home,” Weiss-Hoskova said. “We wandered the streets that night. They gave us a bit of bread at the soup kitchens, and we would carry it in our hands… we didn’t have a bag, or money, or anything.”

Eventually they got back their old apartment.

In July 1945, Helga’s uncle, Josef Polak, brought Helga’s drawings from Terezin. He had taken them from her the night before she was sent to Auschwitz and bricked them into a wall in his barracks at Terezin. The German publisher Wallstein Verlag published these drawings in a book titled “Draw What You See.”

In 1944 the Nazis had tried to convince the International Red Cross that Theresienstadt was a model village for displaced refugees. Although convincingly refuted beforehand, the 1998 publication of “Draw What You See” hammered the nail in the coffin of that half-century-old Nazi myth.

Helga returned to school, making up for all the lost time. After high school she received a fine arts degree, before later getting married and having two children.

During our visit, she spoke of her granddaughter Dominika Weiss, 33, who converted to Judaism and took her grandmother’s maiden name, preserving it for future generations. Weiss, whose mother was not Jewish, was raised Catholic.

“She always felt Jewish, and decided to become a Jew,” Weiss-Hoskova said. “She also wanted to keep alive the name Weiss.”

Her granddaughter’s husband, also a convert to Judaism, changed his last name to Weiss when they married. Although raised in a secular Jewish family and never religious, Weiss-Hoskova has gained a deeper appreciation of Judaism through her granddaughter’s Jewish journey. This new-found sense of connection with her roots is reflected in Weiss-Hoskova’s more recent paintings, which explore traditional Jewish themes.

“I walked with her under the chuppah in Jerusalem,” Weiss-Hoskova said of her granddaughter’s wedding. “I cried.”