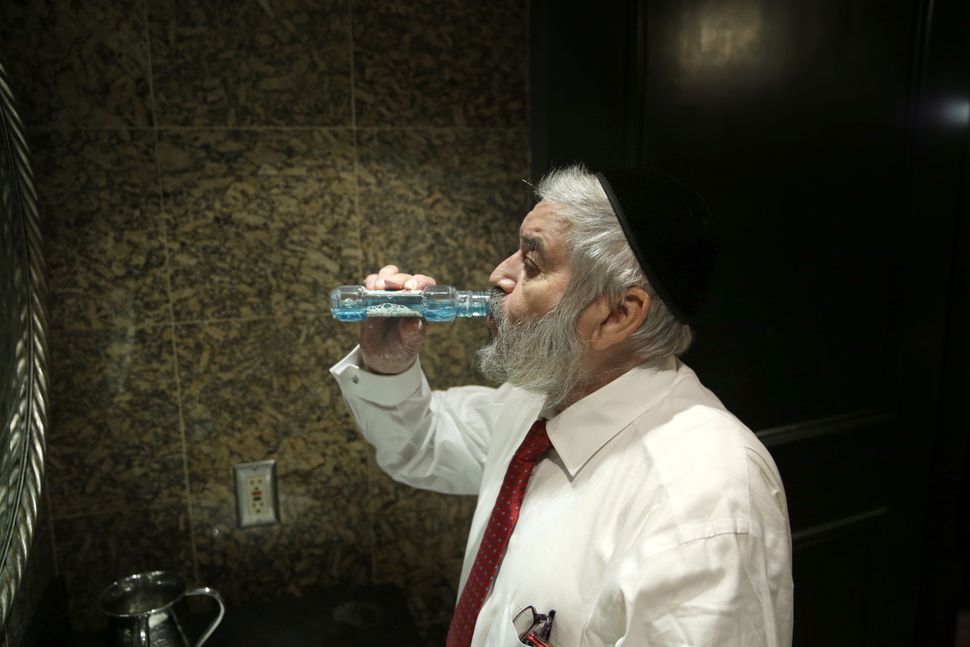 A former county health official claims he has identified a source for herpes infections in ultra-Orthodox baby boys — and it’s not metzitzah b’peh, the controversial ritual in which a mohel uses his lips to suction blood from the circumcision wound.

But E. Oscar Alleyne, the former director of epidemiology and public health planning for New York’s Rockland County Health Department, says that while MBP is a high-risk procedure, DNA investigations that he conducted show that it is not the sole explanation for such infections.

“We’ve been able to identify scientifically that [herpes infection] does occur from other point sources,” Alleyne said.

Alleyne said that by using DNA testing he was able to discount mohels as the source of two neonatal herpes infections in Rockland County in 2014. He said that epidemiological evidence points to a different source for the infections.

Alleyne, however, refused to share that source or his data. His work has not been peer-reviewed or accepted by a medical journal for publication, so his claims cannot be independently verified.

He said that he hoped to publish his study in a medical journal in the coming months.

Jonathan Zenilman, chief of the infectious diseases division at Johns Hopkins Bayview Medical Center, said it was hard to comment on Alleyne’s findings without seeing the data. But Zenilman said that previous claims by defenders of MBP that a health worker or parent transmitted the disease via skin-to-skin contact is highly unlikely. He also said that DNA sequencing analysis is “not as straightforward as it’s made out to seem.”

Even if Alleyne could provide convincing data to suggest an alternative source of infections, Zenilman said it did not change his assessment that MBP “is a risky practice in general and [that] epidemiological data support that.”

Zenilman added that it was unusual for an official to withhold results ahead of publication if they are of public health importance.

Alleyne said that because he has developed a working relationship with the region’s ultra-Orthodox communities, he has already given their leaders his recommendations to improve infection control practices.

“As this was a collaborative venture, the practitioners across the metropolitan New York and New Jersey region have convened and put these recommendations into practice,” Alleyne said in an email.

Alleyne was able to gather data thanks to a deal he struck in 2013 with leaders of Rockland County’s large ultra-Orthodox population.

While ultra-Orthodox leaders have refused to help public health investigations in New York City, they agreed to work with Rockland County’s health department to identify mohels suspected of infecting babies with herpes.

Once a case of neonatal herpes was confirmed, the health department took a series of oral swabs from the mohel as well as from other caregivers. The samples were tested to see if they matched the DNA of the virus in the infant.

The first investigation, in 2013, proved inconclusive. In 2014, two boys from two separate families were diagnosed with neonatal herpes at around the same time.

Alleyne said the boys were circumcised by different mohels in different locations, yet the DNA of the virus in each of the boys matched.

Alleyne said that he identified a source shared by both infants that explained how they were infected. He said that his evidence is based on “an epidemiological link but not a DNA match.”

If verified, the results of the investigation are sure to reinforce the view of many in the wider ultra-Orthodox community that MBP is a low-risk procedure.

They may also be seen as a setback for New York City’s Department of Health and Mental Hygiene, which has been on the political defensive over MBP for more than a year.

Under pressure from Mayor Bill de Blasio, the city’s health department is in the process of repealing a 2012 regulation brought in under the previous mayor that requires mohels to obtain written consent before performing MBP. The consent form warns parents that MBP exposes their infant to the risk of infection and even death.

MBP, which is practiced mostly by certain groups of ultra-Orthodox Jews, is believed to be performed on about 3,500 babies in New York City each year.

New York City’s health commissioner, Dr. Mary Bassett, argued earlier this year that the consent form generated such antagonism with the ultra-Orthodox community and was so ineffective that it should be repealed.

So many mohels flouted the law that, of five infections diagnosed while the regulation was in place, the health department was able to identify just two mohels — both of whom were banned from performing MBP, but not named — and to collect just one signed consent form.

In some cases, parents refused to divulge to health department officials information about who circumcised their baby.

In place of the consent form, health officials vow to step up an education campaign in hospitals and doctors’ offices about the risks of MBP.

All the Jewish babies in New York have been infected with a common type of herpes found in the mouth.

The city cites the location of herpes lesions on or around the infant’s genitals as well as other factors, such as the time of onset of the disease shortly after circumcision, to show that MBP was the source of the infection.

The city’s stance is supported by studies in Canada and Israel as well as by leading medical groups such as the Centers for Disease Control.

However, ultra-Orthodox leaders and mohels argued in their lawsuit against New York City that there is no proof of a link between MBP and neonatal herpes.

Rabbi Avrohom Cohn, chairman of the American Board of Ritual Circumcision and widely considered one of New York City’s top mohels, told the Forward last year that claims that MBP causes herpes is a “blood libel.”

Cohn says that mohels who submit to regular testing for diseases and who rinse with mouthwash can prevent infections.

New York City health officials suggested earlier this year that they too would adopt a protocol similar to that used in Rockland County.

Administration officials, who spoke on condition of anonymity, told reporters that in return for dropping the consent form regulation, ultra-Orthodox mohels would submit to DNA testing.

But Yerachmiel Simins, a lawyer who has negotiated with New York City on behalf of the ultra-Orthodox community, told the Forward that the city has dropped the plan.

“The community has been pushing for this type of investigative protocol for years,” Simins said. “But so far the city department of health doesn’t seem interested in pursuing that.”

Indeed, information released by the health department ahead of a July 7 public hearing to discuss repeal of the consent form made no mention of a DNA protocol. Instead, the department promised only to increase awareness of the risks of MBP by distributing educational materials in hospitals and doctors’ offices.

Simins said, “Since the [health department] is very against this whole thing, there is nothing on the table right now.”

Rabbi David Zwiebel, executive vice president of the ultra-Orthodox umbrella group Agudath Israel of America,who was also a party to the discussions, declined to comment.

The Forward asked the health department why it had dropped plans for a DNA protocol. A department spokesman released a statement August 11 that ignored the question.

Instead, the statement said that the department believes it will be more successful at reducing neonatal herpes infections by having health professionals rather than mohels educate parents about the risk of MBP. “We will continue to investigate cases and take whatever steps are necessary to protect public health,” the statement added.

The city’s board of health will vote on whether to repeal the consent form regulation in September.

Such a vote looks more likely, since de Blasio removed a couple of health board members earlier this summer who were more critical of MBP and replaced them with people more likely to repeal the consent form.

One of those former board members, Dr. Bruce Vladeck, told the Forward that he was “very offended” by the city’s posture on MBP.

“The mohels may deny the science,” Vladeck said. “I don’t think in the community they are denying the science. They say: ‘This is our tradition. We are going to do it even if we lose some babies along the way.’”