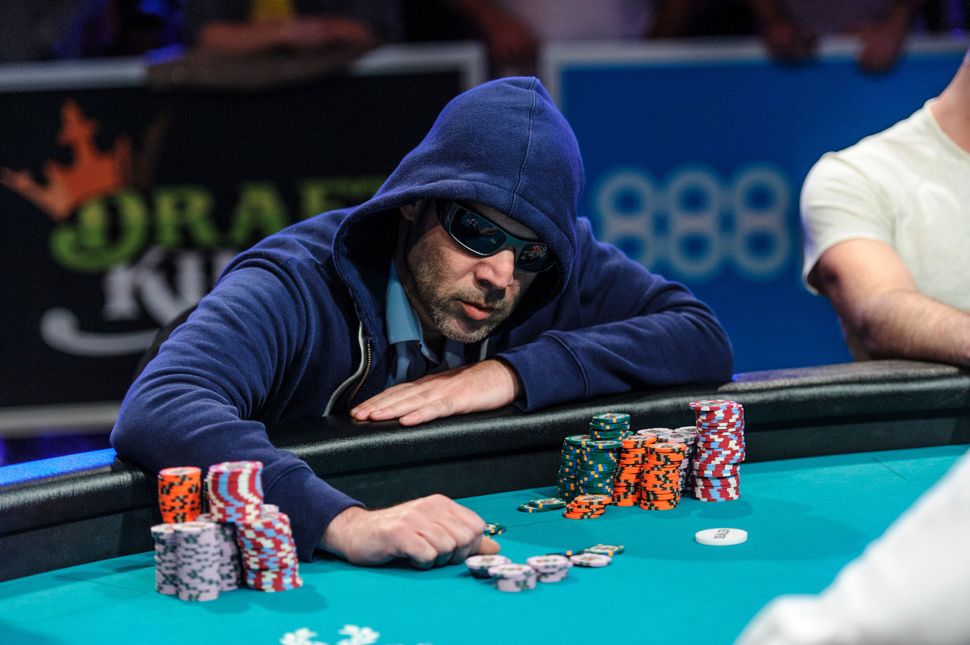 An Israeli mystery man has made it to the final round of the United States’s most prestigious poker tournament, besting some of the world’s top poker players along the way.

Unlike other finalists, some of whom are well-known in tournament poker circles, Ofer Zvi Stern has no obvious online presence and hasn’t taken home a major prize in a live poker tournament since 2008. During competitions, he hides behind a hoodie and dark sunglasses. Yet the 36-year-old has qualified for the final round of the World Series of Poker’s Main Event, already winning $1 million in the tournament. He’ll have the opportunity to up that to $7 million when the competition resumes November 8.

“I’m pretty boring. I do software,” Stern told the poker website Pokernews.com in a stilted video interview soon after making the final round. No substantive profiles have been written on Stern, whose success in the July tournament has catapulted him to the top ranks of the world’s tournament poker players. When contacted by the Forward, the unmarried software developer from a Tel Aviv suburb declined a telephone interview but provided lengthy answers to emailed questions.

“I am coming at it a bit like a Little Leaguer who suddenly gets to pitch in the majors,” Stern wrote. “But I trust myself. Even with not a lot of articles behind me.”

Until late in the evening of July 14, Stern’s tournament poker career had been unexceptional. He had only won $49,000 in prizes in live tournaments, nearly all of that in 2008. That’s not much for a big-shot tournament poker player: Joseph McKeehen, the 24-year-old who holds the most chips of the Main Event’s remaining nine players, had lifetime live poker tournament earnings of $2 million before this competition. Stern, who owns his own small software firm in Israel and lives in the Tel Aviv suburb of Ramat Hasharon, has been traveling to live poker tournaments in the United States and Europe for years. Though he has previously qualified for the World Series of Poker’s Main Event, he’s never finished in the money.

Over 6,000 competitors paid the $10,000 entrance fee to compete in this year’s Main Event, during which players face off in successive rounds of no-limit Texas Hold’em. Stern nearly skipped the competition entirely. He had flown to Las Vegas to compete in a smaller World Series of Poker tournament, then gone all the way home before the Main Event before having a change of heart. “I quickly changed my mind, booked a ticket and flew all the way back,” Stern wrote. “I had to do it.”

It’s a good thing he did. Stern amassed 29.8 million chips during the tournament’s first 10 days, more than all but one other player. The nine players remaining as of July 15, the so-called November Nine, will reunite at the Rio All-Suite Hotel & Casino in Las Vegas in November for a three-day tournament. Their games will be broadcast live on ESPN.

Stern is a relative latecomer to poker. He recalls playing five-cent hands at a friend’s house as a preteen, then losing interest for years. “Girls happened,” he said. He picked up the game again in 2006, at the peak of the online poker boom. From there it was a few short steps to tournament poker.

Poker tournaments boomed in popularity in 2003, after an amateur online poker player named Chris Moneymaker won the World Series of Poker’s Main Event. Today the top ranks of professional poker are dominated by young men who made their bones in online games. In that sense Stern stands out: At 36, he’s relatively old for a top-ranked pro.

Stern’s foes include Thomas Cannuli, 23, and Max Steinberg, 27 — the latter of whom came first in a 2012 World Series of Poker tournament. And, though six of the final nine players are between the ages of those two players, Neil Blumenfield from San Francisco, 61, is the second oldest and Pierre Neuville, a 72-year-old Belgian, is the oldest person ever to make the November Nine.

Stern’s relative lack of prior tournament wins is less unusual. “At least two complete amateurs with almost zero tournament experience … have won the [World Series of Poker Main Event],” writer and poker player Jim McManus wrote in an email to the Forward. McManus, author of “Positively Fifth Street: Murderers, Cheetahs, and Binion’s World Series of Poker,” said that the inherent luck factor in poker is enough to push talented amateurs to the highest levels of tournament play.

Daniel Negreanu, currently the top poker player in the world, missed the final nine in this year’s tournament by just two slots, collapsing to the floor as his hand fell apart. “I was shocked,” he told the poker website PokerListings.com. “I actually legitimately lost my knees and hit my head. I’m a little dizzy, but nothing a little vodka-something can’t heal.”

Stern is aware that he’s playing against men (all nine are men) with more experience than he has. “It’s a game of skill and I will be playing against amazing professionals,” he wrote. “I’m going to do research on how to react when curveballs happen, how to sharpen my focus, how to respond to unexpected scenarios.”

Though Stern is the only Israeli among the November Nine this year, he’s far from the sole Israeli in the game’s recent history. PokerStars, the largest online poker site, is owned by an Israeli-Canadian family. Israeli player Idan Raviv won $457,000 in a World Series of Poker tournament in June, and player Amir Lehavot took third place in the tournament’s 2013 Main Event.

“It means a lot, representing my country,” Lehavot told the Pokernews.com interviewer, after a long pause, in the post-competition interview.