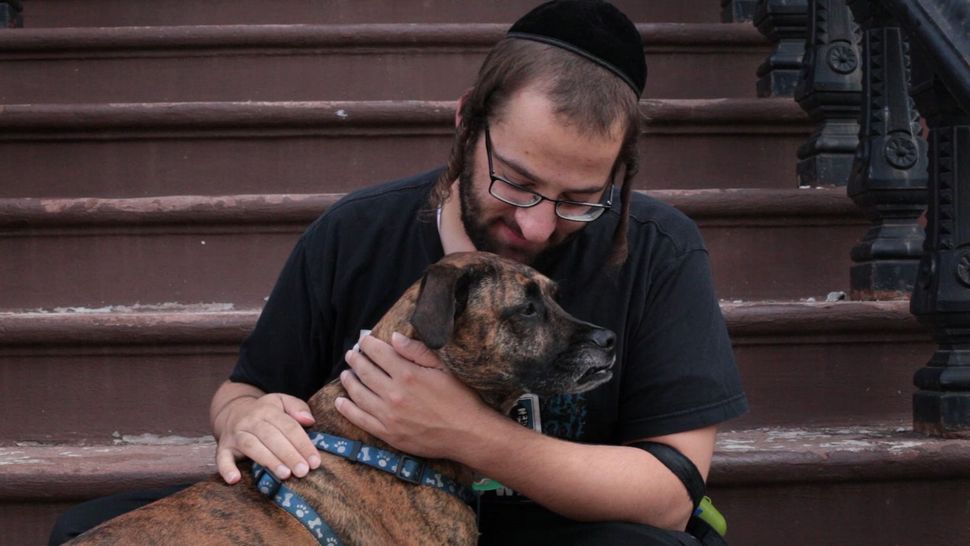 Even for New York City, they make an odd pair walking down the sidewalk: a Hasidic man with a dog.

Gedalya Gottenger shared a happy camaraderie his canine companion, petting him as they lounged for a brief moment in the shade and laughing at the smell as he bent down with a small plastic bag.

Gottenger grew up in a Hasidic area of Williamsburg, where few if any non-Jews lived within a five-to-10 block radius. He rarely saw dogs as a child. Nobody from his neighborhood had them.

The vast majority of ultra-Orthodox Jews fear dogs. Families draw their kids away from approaching dog walkers or cross the street entirely.

“Dogs were seen as frightening by default,” Gottenger said. “It doesn’t matter the size, the shape or the color. They were always scary.”

Gottenger only learned to love dogs after he spent time outside the Jewish community. After studying at Brooklyn College, he babysat a college friend’s playfully aggressive Chihuahua. Gottenger had gone over to their house several times before to complete homework assignments, and played fetch for hours with the Chihuaua before his friend asked him to watch the dog.

Now, he walks up to five dogs regularly for the past year and a half, and takes on others on a case-by-case basis.

According to Gottenger, there were more cons than pros of telling the community that he liked to walk dogs. He was afraid of people being “upset” with him, at first.

“My dad doesn’t know, or at least doesn’t tell me that he knows. My brother saw it, and he was very into it,” Gottenger said. “My aunt e-mailed me at [email protected] She was like, ‘I don’t have a dog but I do want you to visit me.’”

On the street, he gets mixed reactions. He said some curious people ask him about his dog walking, but mostly it’s “very benign.” The most vocal observers of Gottenger’s dog walking service: Puerto Rican men.

They say things like, “‘I can’t believe there’s a Hasidic guy with a dog. Ha ha, that’s so interesting.’ They’re kind of amazed, and entertained in a way,” said Gottenger.

Gottenger says that unlike many in his community, he strives to avoid doing things the way everyone else does.

“There was a point in my life when I became aware, consciously aware, that I’m avoiding stereotypes,” he said.

It’s for this reason he enrolled at Brooklyn College instead of a Jewish institution.

He freely admits there’s no one reason why he loves walking dogs.

“I get to spend time with dogs, which is the most important part, I guess,” he said with a smile. “And then there is the rebellion part, the money part, but it’s all intermingled in a way.”