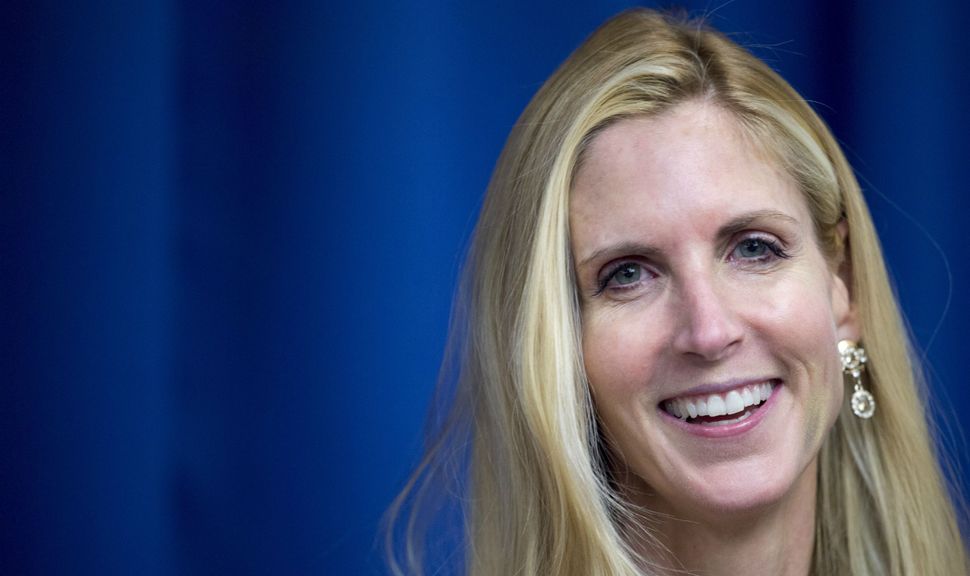 Conservative columnist Ann Coulter used an epithet to describe Jews in expressing frustration with pledges to support Israel during the most recent Republican debate.

“How many f—ing Jews do these people think there are in the United States?” Coulter said on Twitter during the final minutes of the three-hour debate Wednesday evening, when four of eleven candidates mentioned their support for Israel in their closing remarks.

The four candidates were former Arkansas Gov. Mike Huckabee, Sen. Ted Cruz, R-Texas, who said he would move the U.S. embassy to Jerusalem as one of his first acts as president, Sen. Marco Rubio, R-Fla., and New Jersey Gov. Chris Christie.

In a separate tweet, she said, “Maybe it’s to suck up to the Evangelicals.”

When Christie made his pledge, Coulter tweeted: “Christie also talks @ Israel in response to the question: What will AMERICA look like after you are president?”

Subsequently, she tweeted, “How to get applause from GOP donors: 1) Pledge to start a war 2) Talk about job creators 3) Denounce abortion 4) Cite Reagan 5) Cite Israel.”

The sequence drew outrage and satire on social media. Christians United for Israel excoriated Coulter in a release.

“Ann Coulter’s tweets this evening concerning Israel were completely inappropriate,” spokesman Ari Morgenstern said in a statement. “The U.S.-Israel relationship is both a moral and strategic imperative. There are tens of millions of Christians in this country who stand with the Jewish state.”