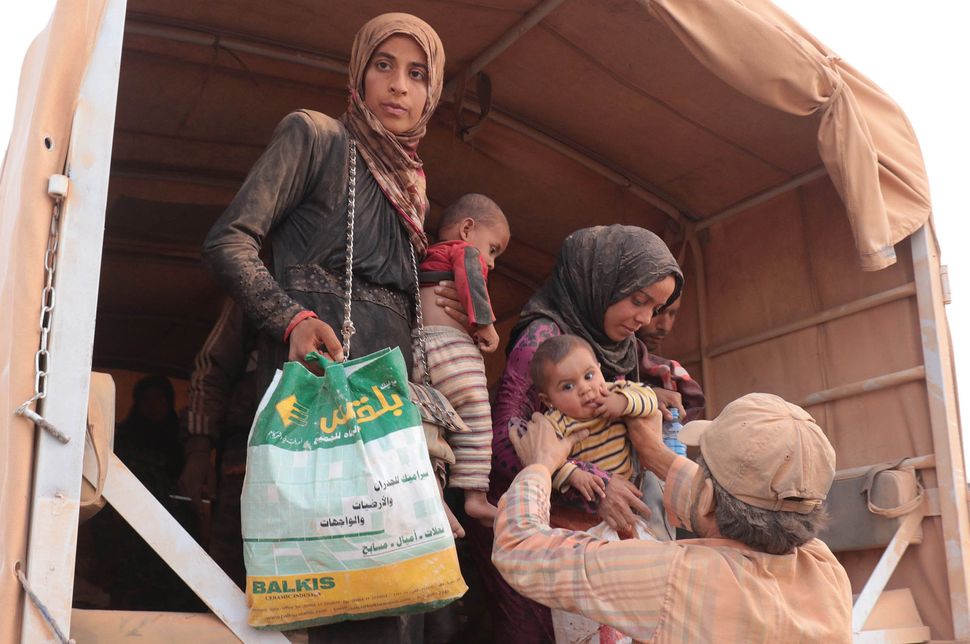 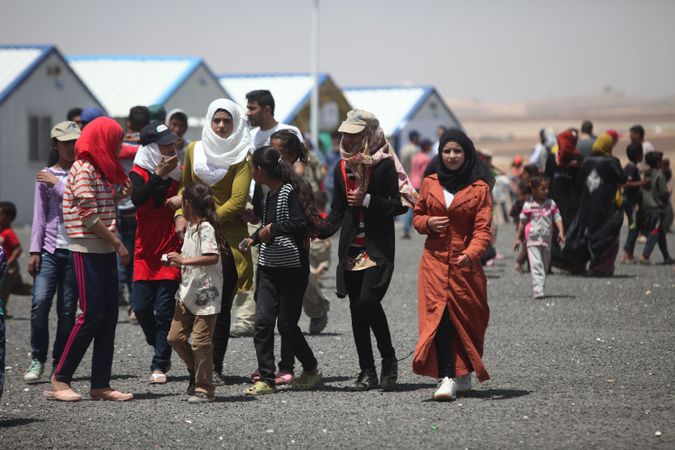 At the end of her Rosh Hashanah sermon, Rabbi Elyse Frishman turned to congregants and asked them to take out their cell phones and start dialing. An unusual scene at the sanctuary, and even more so during a High Holiday service, but Frishman explained that on this day, the cell phone would serve as a shofar and direct the community’s pleadings — not to God but to the White House.

“People came up to me and told me how their families were refugees, too, and how they wouldn’t have been here today had America not let their parents or grandparents in,” Frishman said. “That was so deeply powerful.”

It is yet another sign that the Jewish community is waking up to the Syrian refugee crisis.

Like many around the world, it took a horrifying image of a dead toddler washed to the shore and throngs of migrants reaching Europe’s doorstep to draw attention to the Syrian civil war, which has driven 4 million Syrians out of their homeland.

“Until recently, not enough has been done by the Jewish community,” said Georgette Bennett, founder of the Multifaith Alliance for Syrian Refugees, a coalition that includes many Jewish organizations. “But I believe now we will see a much greater response, because that photograph really galvanized the world.”

For the Jewish community, this sudden shift is being articulated in calls on the administration and Congress to open America’s doors to more Syrian refugees and to prioritize resolution of the Syrian conflict. There are now urgent campaigns to raise funds for humanitarian relief programs carried out on the ground in Syrian refugee concentrations.

“There has been a tremendous sea change in the Jewish community,” said Rabbi Jennie Rosenn, vice president for community engagement at HIAS.

For some rabbis, this change came just as they were putting the final touches on their Rosh Hashanah sermons.

“A group of Reform rabbis started to ask questions about this on Facebook,” recalled Rabbi Daniel Gropper of Community Synagogue of Rye. They eventually decided to use the image of the shofar, replacing it with a cell phone to advocate on behalf of the refugees. At Gropper’s synagogue, congregants were asked to go online and sign a petition asking Obama to increase refugee resettlement quotas.

In his sermon, Gropper tied the struggle for Syrian refugees to the battle the Jewish community has just waged for and against the Iranian nuclear deal. “All the fighting over the Iran deal has tarnished the luster of the Jewish community, especially among younger members, and this will help us get back some of this luster,” he said.

“The Jewish people want to be a light unto the nations,” said Rabbi Jonah Pesner, who heads the Religious Action Center of Reform Judaism. He said the response among rabbis and congregants has been overwhelming and that many are taking on the cause as a moral Jewish issue. “We all want to show that we are a beacon of hope,” Pesner said.

On a practical level, several initiatives now dominate the communal response to the Syrian refugee crisis.

Key to these efforts is an organized call to allow 100,000 Syrian refugees into the United States next year. This figure exceeds the offer, put forward by Obama, of absorbing 15,000 additional Syrian refugees next year, and 15,000 more above that in 2017, for a total of 45,000 additional refugees from Syria than would otherwise have been admitted within two years. HIAS described this offer as no more than a “nice symbolic gesture.”

The group’s plea is also larger than the UN Refugee Agency’s request that America take in 65,000 Syrians. But it still pales in the face of the estimated million Syrian migrants already at Europe’s gates.

Obama is expected to make a final determination on the quota for Syrian refugees by the end of September.

Jewish groups hope that petitions and calls to the White House convince the administration to enact a larger increase. But energizing a community that has just now ended its largest political mobilization in years over the Iran deal could be a formidable task. Adding another layer of difficulty is the fact that some in the community have mixed feelings about allowing citizens of a country hostile to Israel into the United States, some of whom carry this hostility with them even after fleeing Syria.

“People told me, ‘Rabbi, you are totally naive,’” Frishman said, describing how some in her community criticized her for promoting an increase in admission quotas for citizens of a country at war with Israel.

Mark Hetfield, president and CEO of HIAS, said that increasing quotas to include an extra 100,000 Syrian refugees may sound like a big step, but it is clearly a mission America can undertake. The United States resettled more than 200,000 Vietnamese in 1980, and in the mid-1990s it absorbed 140,000 from Indochina, the former Soviet Union and the former Yugoslavia.

“If we see half the advocacy level we’ve seen on Iran, I’ll be happy,” Hetfield said.

During a Rosh Hashanah service talk before blowing the shofar at the Conservative movement’s Jewish Theological Seminary, Rabbi Julia Andelman, JTS’s director of community engagement, sought to address the concerns of critics who warn of the risk of allowing radical elements to enter the United States and Europe.

Using the biblical story of how God spared the life of Ishmael even though He was warned that some of the boy’s offspring would seek to harm his own people, Andelman said, “These are people seeking safety now, and that is how we need to treat them.”

In fact, the security issues here are much different from those in Europe, where there is scant opportunity to screen masses of refugees already entering through the continent’s borders.

Syrian refugees up for resettlement in America will come from the camps in Jordan, Lebanon and Turkey. Separated from the Middle East by an ocean, the United States has the opportunity to rigorously vet every Syrian seeking refuge on its shores. Activists believe that if pressure is relieved in the Middle East refugee camps, there will be less of a push for refugees to embark on the dangerous and difficult journey to Europe. But this vetting process, Jewish activists say, is at times actually way too rigorous. 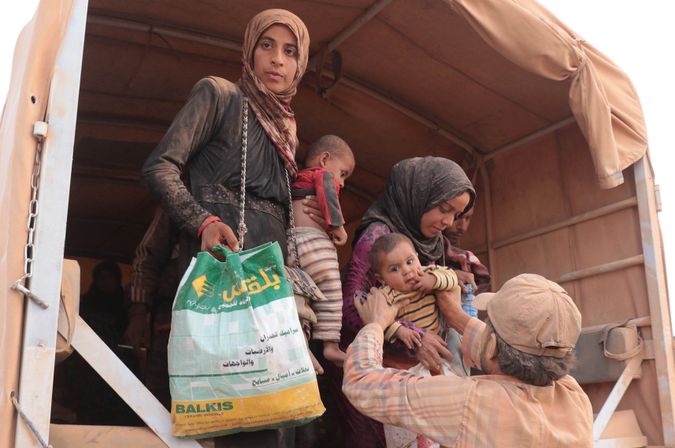 A refugee waiting for resettlement in a camp outside Syria must undergo a lengthy process that includes fingerprinting, eye scanning, face-to-face interviews and background checks, all conducted by a dozen intelligence and security agencies. This translates into an average waiting time of 18 months before any Syrian can enter America.

“Since 9/11, the government wants to show that they’re doing something, so people are afraid to trim any measures even if these measures are not effective,” Hetfield said. “It’s this hysteria that paralyzes the entire system.”

Hetfield and other advocates noted that during World War II, the United States refused entry of many German Jewish refugees, citing the same security concerns — the fear that hostile elements would slip in to America.

Another, and possibly more explosive, element of the Jewish advocacy effort on the Syrian refugee issue goes to the core cause of the problem — the Syrian civil war and the question of whether the Obama administration has been doing enough to resolve it.

“We believe the United States can play an important role in trying to end the civil war,” said Jonathan Greenblatt, national director of the Anti-Defamation League, which has joined calls to increase immigration quotas while ramping up America’s involvement in the crisis.

But does increased involvement mean U.S. troops should end up on the ground, fighting to end the three-way war raging among Syrian President Bashar al-Assad, anti-regime rebels and fighters of the self-proclaimed Islamic State? Greenblatt would not go so far.

“We’re not telling the president how to do it, but we have a role to play in advocating that the U.S. increase its involvement in resolving this conflict,” he said.

Shoshana Bryen, senior director at the conservative-leaning Jewish Policy Center, said that while every one should try and help the Syrian refugees, it is other countries, namely Russia and Iran, that bear responsibility for creating the problem.

“It’s neither our fault nor our responsibility,” she said. “This doesn’t mean the United States should close its eyes in the face of this humanitarian crisis, but it’s ridiculous to say we have a moral responsibility when we’re not involved in the war.”

Some Jewish activists chose a different path for helping Syrian refugees, one that sidesteps controversy and political advocacy efforts.

The American Jewish Joint Distribution Committee has been operating with nongovernmental organizations on the ground in Jordan for more than two years in an attempt to help Syrian refugees driven out of their country. With a coalition of Jewish organizations and an initial budget of $500,000, JDC has worked with a dozen international, Jewish and Israeli groups to provide assistance to the refugees in the camps. Following the surge of Syrians entering Europe, and the increased attention to the issue, JDC decided in early September to expand its work to other concentrations of refugees beyond Jordan, including in Europe.

“There’s a direct correlation between the media exposure the Syrian conflict is getting and the ability to raise funds,” said Will Recant, JDC’s assistant executive vice president. He said the money already raised — half a million dollars before, and another $120,000 for expanding the program — can make a difference: “It’s significant, because it helped thousands of Syrians see Israelis and Jews helping them at their time of need.”

Bennett agreed that work being carried out by the Jewish community and Israel on the ground in Syrian refugee camps could bear political fruit in the future. Barriers were being breached, she said, between Syrians, raised to view Israel as an enemy, and the Jews and Israelis working to help them.

A Syrian from the country’s medical service who is now active in a humanitarian organization helping refugees from his homeland, concurred with this view during a visit to Israel in March. The activist, who is now a refugee himself, and who asked not to be identified in the media due to fears for his safety, told a gathering at the Truman Institute at Hebrew University of Jerusalem that he had grown up being taught that all Israelis want to kill the Syrians and drive them off their land.

“And then we saw the Israelis are human beings and not monsters, and there is a diverse society here like in every country in the world,” he said, according to a report in the Israeli daily Haaretz.

For Bennett, these encounters lay the groundwork for “a kind of political progress looking at the day after. This is game-changing stuff that’s going on.”