Despite Threats, the Oslo Pact Is Still Intact — But for How Long? 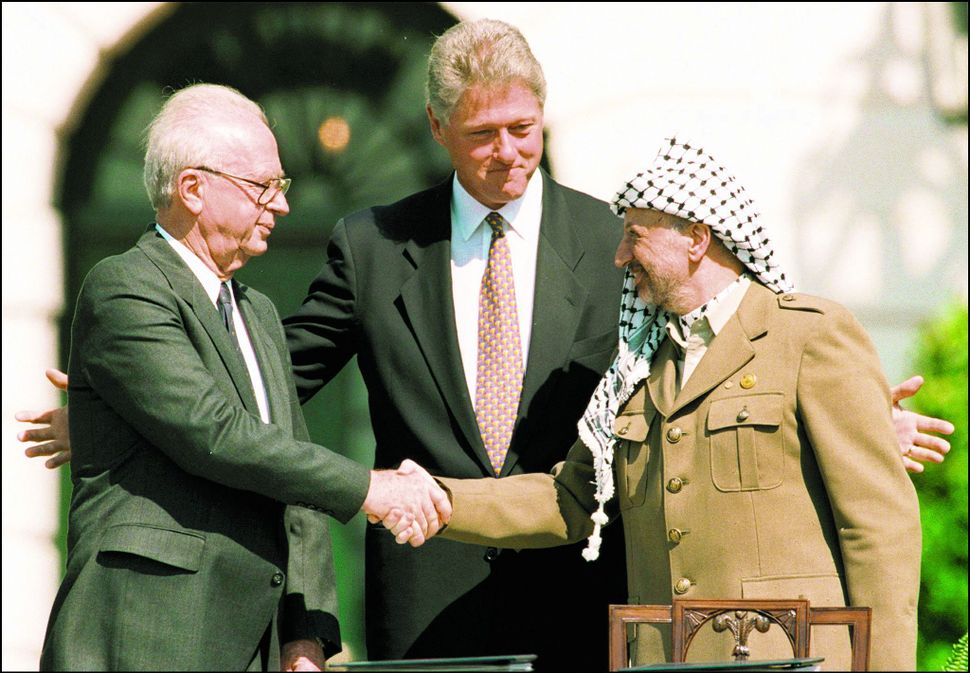 When a frightening spate of terror attacks targeted Israelis in early October, the violence seemed to arrive right on cue: amid rising tensions over the Temple Mount, after the Israeli army’s killing of a young female student at a checkpoint and on the heels of dueling speeches by leaders of Israel and the Palestinian Authority at the United Nations General Assembly.

The speech by P.A. President Mahmoud Abbas in particular dropped a “bombshell,” as he himself described it in the days before the address. In it, Abbas all but renounced the Oslo Accords, the seminal 1993 peace agreement between Israel and the Palestine Liberation Organization.

“Israel has destroyed the foundations upon which the political and security agreements are based,” Abbas charged in his address. And so long as Israel fails to implement previous agreements, he continued, “We therefore declare that we cannot continue to be bound by these agreements and that Israel must assume all its responsibilities as an occupying power.”

The words seemed definitive. But Oslo has been the agreement that refuses to die, even as it seems all but drained of life. Most crucially, Israelis and Palestinians have maintained key security provisions of the Oslo Accords — even while ignoring its many other obligations — through much bleaker times, including the bloody second intifada that raged from 2000 to 2005.

It remains to be seen whether Abbas will take the step of cutting that cooperation today. So far, since his return from New York, he hasn’t.

It has been more than two decades since the first of the Oslo Accords was signed, in 1993, on the heels of the first intifada. The historic breakthrough between Israel and the Palestine Liberation Organization was brokered in secret in the Norwegian capital when Israel recognized the PLO as the representative of the Palestinian people and the PLO recognized the State of Israel.

The agreement created the Palestinian Authority as an interim governing body and provided for a phased withdrawal of Israeli troops from Palestinian cities. It also established a five-year timeline for Israelis and Palestinians to work out the thorniest issues dividing them: the status of Jerusalem, Palestinians made refugees in Israel’s 1948 and 1967 wars and Israeli settlements.

The second Oslo agreement, signed two years later, created the blueprint for Palestinian autonomy and paved the way for further Israeli withdrawal. But then, the assassination of Israel’s dovish prime minister, Yitzhak Rabin, by a Jewish extremist in 1995 was followed by the election of hard-liner Benjamin Netanyahu to succeed him the following year. And in 2000 the second intifada broke out. Oslo was essentially frozen at the second phase, where it remains today. Under its provisions, the West Bank remains broken up into a patchwork of legal jurisdictions as Israel’s military occupation continues overall. Palestinians conduct limited self-rule in certain areas and none in others.

“Oslo was supposed to last only until 1999, and it has been running on autopilot ever since then,” said Nathan Thrall, a senior analyst with the Middle East Program of the International Crisis Group. “The arrangements we now think of as more or less permanent were supposed to be temporary and transitional.”

Yet despite Oslo’s endurance, there’s no question that the agreement’s failure to reach the third phase constricts day-to-day life in the Palestinian West Bank and Gaza. It also undermines the security of Israelis.

One major issue is freedom of movement for Palestinians, a promise enshrined in the first Oslo agreement. For Palestinians, the West Bank today remains a maze of restricted roads and military security checkpoints where waiting in lines and passing through inspections can add hours for trips that would otherwise take 30 minutes or less. Many gates are closed at night, which, according to the World Bank, “causes complications for the normal conduct of life and business and can be life threatening in cases of medical emergency.”

This has real consequences. Since Palestinian businessman Sam Bahour moved to the West Bank from Ohio in a flush of optimism just after Oslo, he has tried to invest in the Gazan economy. Most recently, he hired three translators in Gaza to work remotely at his business-consulting firm. But blackouts in the coastal strip prohibited them from completing their tasks. Bahour laid them off and hired local translators instead.

“Companies like my consulting firm cannot operate in the Gaza Strip, where 40% of Palestinians under occupation live,” he said. “The structural damage done to our economy can be pointed to on several different key issues, the linkage [between the West Bank and Gaza] being one of them.”

If Oslo had gone according to plan, the translators would have been able to commute to the West Bank from Gaza to work via a so-called “safe passageway.” Oslo promised conduits to connect the West Bank and Gaza through central Israel, facilitating the flow of people and goods and allowing entrepreneurs like Bahour to do business across both territories. One such passageway was created in 1999, but it lasted less than a year. As the second intifada ramped up, Israel halted transit between the two territories, claiming that Palestinians were using the passageway to transport weapons and militants.

This, Israelis say, was also a violation of the Oslo Accords. 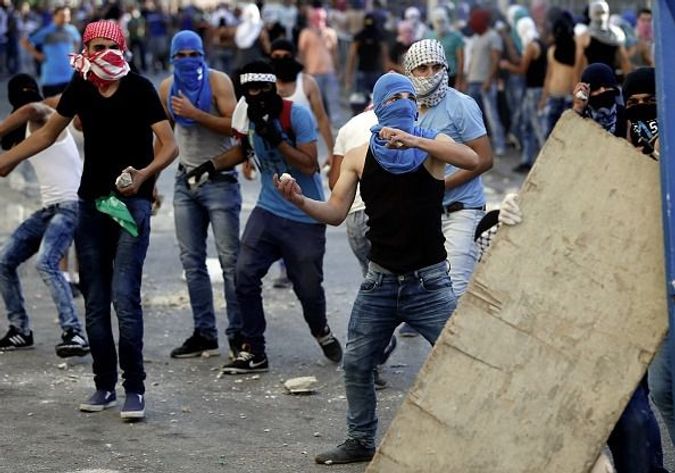 “We found ourselves in a situation which, for all the goodwill in the world, we could not allow to continue,” said Emmanuel Nahshon, spokesman for the Israeli Ministry of Foreign Affairs. “It was a total misuse and abuse of the freedoms coming with the Oslo agreements in order to simply launch terror attacks at Israel.”

Israeli concerns can only have intensified since 2007, when Gaza was taken over by Hamas, a designated terrorist group. Yet Oslo also improved security for Israelis by creating a mechanism for coordination between Israeli and Palestinian security forces that Israeli security authorities consider highly effective. Their assessments often contrast sharply with those of Israel’s political leaders, who regularly accuse Abbas of inciting his people to commit murder.

The gap was on display last November, when Netanyahu immediately blamed “incitement” by Abbas for an attack by two East Jerusalem Palestinians on Jewish worshippers in a West Jerusalem synagogue. The attack left five Israelis dead.

Just hours after Netanyahu’s statement, the director of Israel’s Shin Bet domestic security service told a Knesset Committee that Abbas “is not interested in terrorism and is not leading [his people] to terrorism. Not even under the table.”

The Shin Bet chief, Yoram Cohen, acknowledged that there were “factors within the Palestinian Authority” who interpret Abbas’s criticisms of Israel as “giving legitimization to terror.” But he said that the sequence of events that led to the bloodbath began with the July 2 murder of Palestinian teenager Muhammad Abu Khdeir. Tensions were inflamed, he said, by Knesset discussions of a bill to permit Jewish prayer on the Temple Mount in Jerusalem, an area sacred to both Jews and Muslims but which has for centuries been the site of three monumental Muslim pilgrimage structures and under Islamic administration. High-profile visits of Israeli politicians to the Temple Mount that were seen as supporting the legislation added to the tensions, said Cohen — a sequence of events not unlike the one preceding the current violence. This time, in an attempt to restore quiet, Netanyahu has temporarily banned Israeli Knesset members and ministers from the Mount.

A 2011 report by the Knesset Foreign Affairs and Defense Committee lauded the P.A.’s “comprehensive security coordination.”

Meanwhile, Abbas has paid a heavy price for this coordination among his own people, who view him as protecting Israelis while Palestinians suffer. Even so, Abbas has called such coordination “sacred,” and the recent clashes won’t likely change his views, at least for now. Israeli and Palestinian security officials even met to discuss how to tamp down violence in Jerusalem and the West Bank.

Still, some warn that coordination will erode in the long term. The situation in Israel and the Palestinian Territories has deteriorated since early October as Palestinian stabbing attacks against Israelis continue and the Israeli military has killed more than a dozen Palestinians, many of them teens, in West Bank and Gaza clashes. “This legacy will not continue to persist,” said Yaron Ezrachi, a political scientist and professor emeritus at Hebrew University. “I think we are on a path of a kind of snowball effect of gradual deterioration into the third intifada.”

Beyond the changes on the ground, Oslo forged new but divergent psychological realities for Israelis and Palestinians.

“The vast majority [of Israelis] relate to it as a peace treaty, so they think we made peace with the Palestinians and they continue to terrorize us, and so on,” said Menachem Klein, a Bar-Ilan University political scientist. Their failure to understand that Oslo didn’t yield Palestinian independence leads Israelis to misunderstand Palestinian claims today, he said.

Palestinians, on the other hand, imbued Oslo with too much hope, seeing it as the inevitable path to an independent state when that was far from given, wrote Yezid Sayigh, an analyst with the Carnegie Middle East Center in Beirut, Lebanon, in an essay in Al Jazeera. This, he argued, prevented Palestinians from effectively grappling with the growth of Israeli settlements, which have more than doubled in population since Oslo, chopping the future Palestinian state into bits and pieces.

“The critical failing, from a Palestinian perspective, was that the energy invested in constructing an autonomous governing order and waging domestic political contests during the interim period was not matched by a systematic mobilisation to mount a sustained challenge to Israel’s unrelenting settlement programme,” he wrote.

But while Oslo never delivered Israeli-Palestinian peace, it still “dictates literally every aspect of life” in the West Bank, Thrall said. If Abbas makes good on his threats to do away with Oslo, the reality on the ground would radically change in a way that Israeli and Palestinian leadership don’t want.

It would also mean that Abbas would fire himself as the head of the P.A., which was created by Oslo.

Until then, Palestinian despair with the status quo is playing out in numerous ways. Thrall pointed to the boycott, divestment and sanctions movement; Palestinian hunger strikers in prison, and the so-called “lone wolf” attacks of recent days as evidence of mounting frustration on the Palestinian street.

“All of that is a manifestation of Palestinians giving up on their leadership and taking matters into their own hands,” he said.

Despite Threats, the Oslo Pact Is Still Intact — But for How Long?