Why America Stays Silent as Israel Violence Spirals Toward ‘Intifada’ 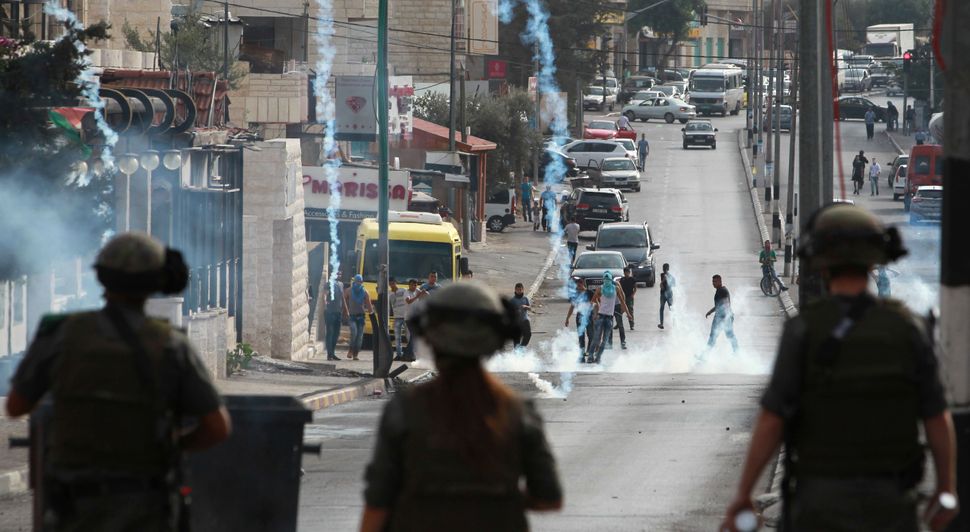 When tensions between Israelis and Palestinians flared up in Jerusalem last November, Secretary of State John Kerry invited Israeli and Palestinian leaders to an emergency summit in Jordan to clear the air and restore calm.

This month, when demonstrations erupted again around the Temple Mount and evolved into an outburst of violence across Israel and the occupied Palestinian territories, Kerry’s response was notably less kinetic: a set of phone calls to Israeli and Palestinian leaders, expressing America’s “deep concern” while stopping short of taking any practical measures.

Three days later, after a day of violence on October 13 that left three Israelis dead, Kerry announced he would go out to the region “at some point appropriately” to “try to work to reengage and see if we can’t move that away from this precipice.”

America’s instinct to offer, or at times impose, its mediation and conflict resolution services whenever tensions in Israel and the occupied Palestinian territories threatened to boil over has given way to a cautious wait-and-see approach.

“We’re really distracted now; there’s just too much going on,” former State Department Middle East negotiator Aaron David Miller said. He recalled that in the past, much of America’s diplomatic work in the region was devoted to defusing tension between the sides, including in the 1996 Sharm El Sheikh summit hosted by President Clinton after a wave of terror attacks.

“The lack of even an image of a hands-on role is problematic,” Miller added.

Events in Israel have swirled into a violent surge of daily Palestinian knifing attacks on Israelis, some Israeli retaliatory knifings of Palestinians and shoot-to-kill responses by Israeli security forces, which have left victims on both sides. The violence has deprived Israelis of a sense of relative security that they enjoyed for the past 10 years, as Palestinians continued to live under military occupation, and as the hope of a peace process that could end it vanished. For many observers, the intensity of events was reminiscent of the two previous Palestinian uprisings, known as intifadas, which took place in 1987 and in 2001, respectively.

America’s public response to the recent developments, which the parties still insist do not mount to a full-blown intifada, has been muted in comparison with previous outbreaks of violence. In private discussions, an Israeli government source in close contact with the administration said, American officials made clear they had no intention of wading into the conflict any deeper, or of launching a diplomatic campaign to address the situation. “They’re just hoping it doesn’t get any worse so they’re not dragged into it,” the Israeli government source said.

A series of attacks on October 13 that left three Israeli citizens dead moved the State Department to issue a statement expressing deep concern and urging both sides to “take affirmative steps to restore calm and prevent actions that would further escalate tensions.”

The statement defined the American role as maintaining “regular contact” with the government of Israel and the Palestinian Authority.

Later, Kerry told an audience in Boston, “You have this violence because there’s a frustration that is growing and a frustration among Israelis who don’t see any movement.” He offered no specifics regarding his plans to go out to the region, nor did he place blame on either side for the outburst of violence.

Congress has also been slow to react to events, though once the long Columbus Day weekend was over, and after the dust settled from the latest House GOP leadership debate, a steady stream of pro-Israel statements began flowing from both sides of the isle. “Seems you can’t walk through Jerusalem today w/o being on alert for terrorism. I ask my colleagues to join me in condemning the violence,” New York Republican Dan Donovan tweeted. House Democratic Whip Steny Hoyer said in a statement that “Israelis deserve to live without having to fear for their safety or that of their children, and the United States will continue to ensure that Israel has the resources it needs to enhance its security and meet any threat.” And for those members slow to take a position, pro-Israel advocacy groups such as New Jersey-based NORPAC, offered a reminder, urging its members to contact Senator Cory Booker and ask him “to ensure President Abbas is sent a clear message that terrorist attacks against innocents is by no means acceptable.”

The administration’s muted response to the outburst of violence clearly demonstrates how the Israeli-Palestinian conflict, once a top priority for any American policymaker, has now been overshadowed by the region’s other urgent crises. These are seen as demanding more immediate attention and have greater bearing on America’s world posture. The recent deadly terror attack in Turkey bumped the smaller-by-comparison attacks in Israel from news headlines, and the Syrian civil war, with the massive refugee crisis it created and the latest Russian military involvement, focused Obama’s attention on Syria as the key regional hotspot rather than on the Israeli-Palestinian conflict.

Israeli and Palestinian officials in Washington noted Obama’s omission of any mention of the conflict in his recent United Nations speech as a clear sign of the low priority this issue now occupies on the president’s agenda.

“It’s the cruelest of ironies that even when the Palestinian problem asserts itself with this surge of violence, people are fatigued and exhausted by it,” Miller said. “It now resembles an eternal conflict between Israelis and Palestinians with knives and stones and guns, which has not risen to the level that will cause the parties to intervene.”

He also noted that ever since the collapse of Kerry’s peace initiative last April, the United States has no full-time special envoy to the Middle East. It therefore lacks the ability to continuously engage with top-level officials on both sides without having to drag the secretary of state or the president into the conflict personally.

On the ground, America’s choice to wait out the recent conflict is viewed as yet another demonstration of Washington’s declining power in the region, said Ghaith al-Omari, a former Palestinian negotiator who is now a senior fellow at the Washington Institute for Near East Policy. “The Palestinian leadership understands that only the U.S. can move the ball, but they don’t have much hope the Americans will get involved,” al-Omari said. “They know that the U.S. is preoccupied, and they have doubts about the effectiveness of this administration.”

But while all sides agree that America’s silence in light of the increasing violence is unusual, there is also a clear consensus that there is little the Obama administration can do to repair the situation or restore calm.

In contrast to previous flare-ups, even Israelis concede that this is a grassroots uprising, not a set of events orchestrated by the Palestinian leadership. “Israel doesn’t feel that the U.S. needs to deliver Abbas, because Abbas doesn’t have to be delivered,” said Natan Sachs, a Middle East scholar at the Brookings Institution.

Sachs argued, however, in a recently published paper, that America still has a role in maintaining stability in the region even if it is not in a position to advance the goal of a two-state solution. It can do so, he wrote, by supporting incremental steps on the ground to help the Palestinians and by presenting a framework for a final solution even if it cannot be immediately negotiated.

“It’s important that the U.S. does not see itself as an all or nothing actor,” he said.

Why America Stays Silent as Israel Violence Spirals Toward ‘Intifada’