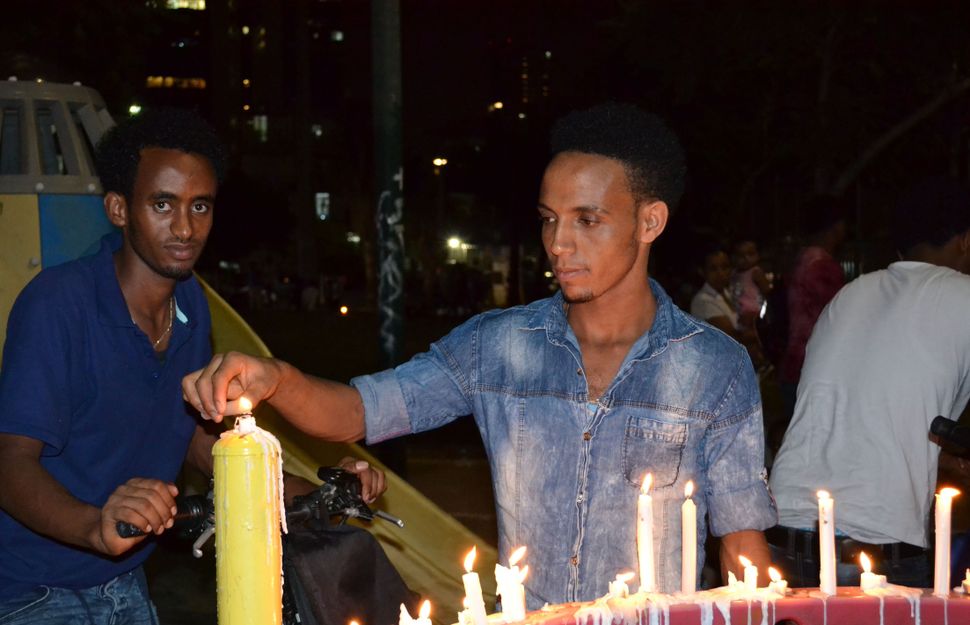 Hundreds of African immigrants grieved on Wednesday night at an Israeli memorial service for an innocent Eritrean man killed when he was mistaken for a terrorist in Beersheba earlier this week.

Candles in a shape of a cross lit up a Tel Aviv park as mourners wept over the killing of Haptom Zarhum, who was slain in the chaos following a deadly terror attack.

“I don’t know who to be more afraid of, the terrorists or the security guards,” said Dawit Demoz, from Eritrea.

Zarhum, 29, was at the Beersheba bus station where a Bedouin man opened fire on Sunday, killing an Israeli soldier and wounding several others. A security officer shot Zarhum, believing him to be the culprit. As he lay on the ground bleeding, he was attacked by an Israeli mob. Zarhum later died from his wounds. 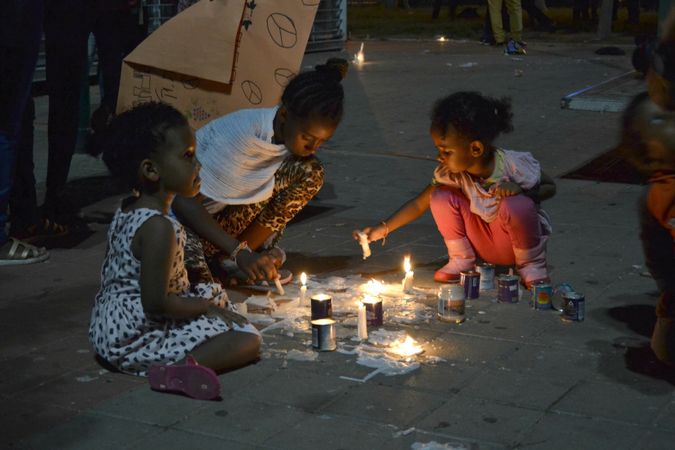 Children light candles at memorial for Eritrean immigrant killed by mistake after a terror attack in the town of Beersheba. Image by Naomi Zeveloff

The incident sent shockwaves through the ranks of asylum seekers, who largely live at the margins of Israeli society. About 40,000 Eritrean and Sudanese refugees live in Israel with uncertain status since the government rejects their asylum claims. Though they are not legally allowed to work, many do find employment at hotels and restaurants.

Now, as violence has spread across Israel and the Palestinian territories, it has touched them too.

The memorial service for Zarhum was at Levinsky Park, the South Tel Aviv hub of the asylum seeker community. Throngs of immigrants from Eritrea and the Sudanese province of Darfur as well as a handful of Israeli activists stood around a makeshift stage where the community’s religious leaders spoke about Zarhum’s death. Women wept and young children lit candles with their parents.

For the mourners gathered, Zarhum’s death exacerbated their feelings of insecurity in Israel.

“We faced persecution and genocide and we came on a journey, paying thousands of dollars to find a safe place, but we are not safe,” said Demoz. 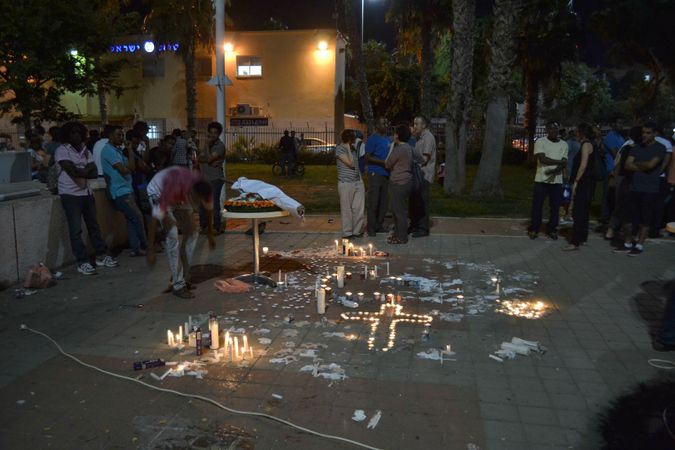 Demoz said ordinary Israelis took a racist cue from officials like Miri Regev, Israel’s Minister of Culture and Sport, who called asylum seekers a “cancer” in 2012.

“If Miri Regev is saying Africans are a cancer in Israel’s body, how can I expect them not to shoot me?” he continued.

Police are still investigating the deadly shooting. Prime Minister Benjamin Netanyahu denounced the killing and warned citizens against taking the law into their own hands amid the wave of violence. But some African protesters believe that Zarhum’s death was no accident. They charged that Israeli civilians had used the terrorist attack as an opportunity to vent their rage against the Eritreans and Sudanese, whom the Israeli government calls “infiltrators.”

“Some say they did it on purpose because he is black,” said Bahr Adam, a 31-year-old Sudanese activist. “It was a chance to take their revenge.”