Just a trace of the chalk slogans is all that remains on the sidewalk outside the entrance to the West Quad section of Brooklyn College. But the slogans, part of a form of protest and expression that has surfaced on the Midwood campus this past month, are yet another indication of the longstanding tensions between students over the Middle East conflict.

Along with the holding of meetings and circulation of flyers and posters, the chalk-scrawled messages appear to be a new strategy for Brooklyn College students who wish to voice their opinions.

For the past two weeks, several pastel-colored chalk signs have been written in bold and wide lettering just outside the campus, with statements that range from “End the Occupation on Palestine,” to “Murdering Civilians≠Resistance.” 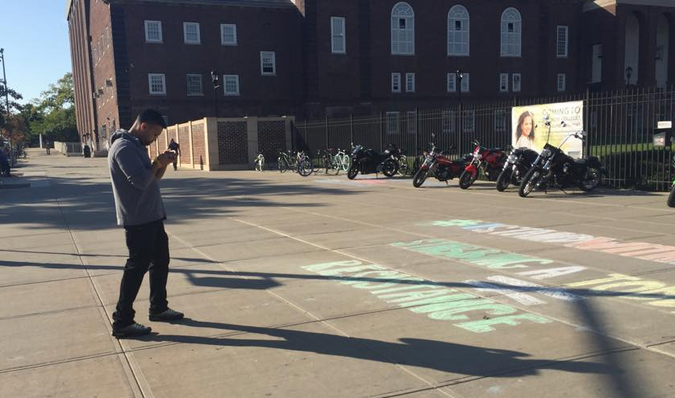 The signs coincided with the spate in knife attacks, air strikes and clashes between civilians in Israel and Palestine that have left many fearful of a full-blown third Intifada. At least eight Israelis and dozens of Palestinians have been killed just this month.

Chalk signs written by the Brooklyn College Students for Justice for Palestine (SJP) chapter started to appear on the same day the SJP staged a die-in on the Bedford Avenue sidewalk, Facebook posts show, as part of an international “Day of Rage” held in solidarity with Palestine’s call to protest the “Israeli aggression against Palestinians” and the controversial death of teenagers Hadeel Al Hashalmoun and Fadi Alloun. A post that some students referred to as pro-Intifada also appeared on the BC SPJ Facebook page. Several days later, pro-Israeli students started taking part in the chalk writing as well.

“We feel like both sides have the right to speak,” said one student who wished to remain anonymous.

Tension over the Israeli-Palestinian conflict is hardly new to Brooklyn College.

Protests mounted in response both to the political science department’s “co-sponsorship” of an event that featured Judith Butler and Omar Barghouti of the Boycott Divest Sanctions (BDS) movement in 2013 and the invitation of conservative and inflammatory speaker David Horrowitz by a student in 2011 (which was sponsored by a business professor), as well as die-ins staged by the SJP, have all contributed to a polarized discourse on the campus.

“A lot of people felt very bad and very vulnerable. And it was just very horrible to come back from the holiday and see all these slogans on the sidewalk” said Grace, a senior majoring in Judaic Studies and Fine Arts. She asked that her last name be omitted.

“The average college student only saw one side of this issue. The Jewish students felt like there’s no response. And that’s the worst part.”

The Hillel of Brooklyn College had advised that students who were offended by the signs send letters to the administration, but Grace and her sister, who identify as Syrian Jews, responded by writing some of their own statements. When other pro-Israeli students participated with her, feelings intensified, Grace said.

Words representative of both sides appeared to be blotted out of slogans. “Israel” was scribbled out of a statement that read “I Stand with Israel.” Water was poured onto several other chalk writings and one statement written by Grace that read, “Stop the lies Intifada = Murder and Terrorism,” was manipulated to say “Intifada ≠ Murder and Terrorism,” Grace said. Back and forth comments such as “They’ve Got Every Right,” with an arrow drawn in the direction of the statement “Murdering Civilians ≠ Resistance,” made for a cluttered and jarring visualization of tensions that students say have been present on the campus for years.

Another student compared the back and forth sparing to writing seen on bathroom stalls, but said there was potential for positive outcomes as long as students “respect one another as students of Brooklyn College.”

And although this latest expression of protest may seem trivial in the wake of the unrest, it is just one of several demonstrations taking place in New York City in response to the conflict. On October 11th, a pro-Israeli protest called “Stop the Terror—Jewish Lives Matter” was held in midtown Manhattan. A pro-Palestinian rally was also held a week later in Times Square, and Chicago.

Because these chalk signs were written just outside the campus gates on Bedford Avenue, the Brooklyn College administration says it has no power to regulate the protests.

The Brooklyn College SJP chapter did not return emails for inquiry.

It is not clear how the messages were removed from the sidewalk, although weather and mandatory sidewalk cleaning may have helped.