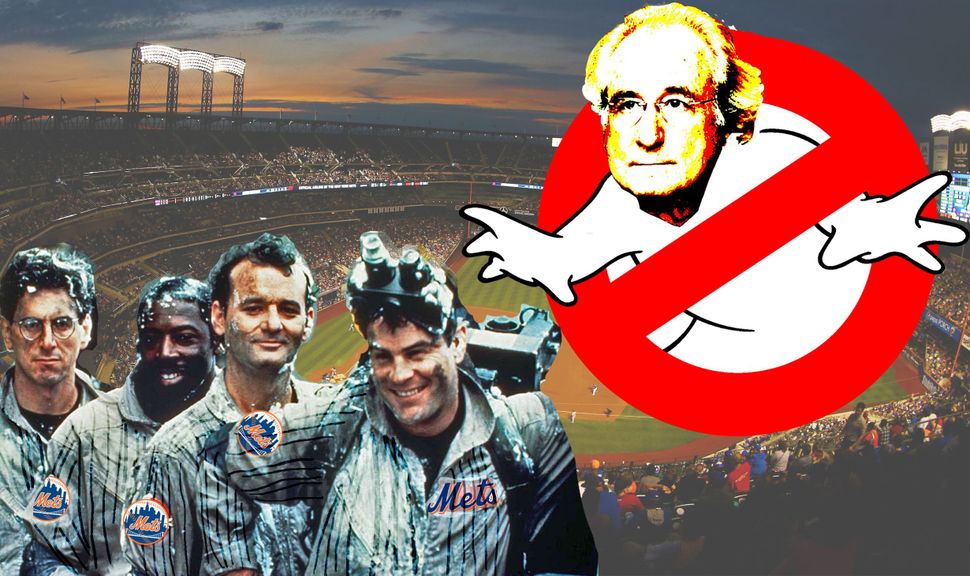 As the young superstars of the New York Mets soaked each other with Taittinger Champagne and Budweiser in the moments after seizing the National League pennant on October 21, the ghost of the Madoff Affair was writhing in a Proton Stream somewhere in corporate offices at CitiField.

Or that’s how it felt when the television broadcast cut away from the Champagne bath to what looked like a hospital hallway, where Mets kingpins Fred Wilpon and Saul Katz — who four years ago faced a billion-dollar lawsuit and near-certain financial ruin in the aftermath of the Madoff fraud — were handed the National League’s championship trophy.

“Aghh,” said Bill Giles, 81, honorary president of the National League, as he lifted the mahogany block and handed it to Wilpon, 78, the Mets’ majority owner. “It’s heavy.”

“Thank you very much — ooh!” said Wilpon, taking the trophy and hoisting it up and down before passing it to Katz, 75, the club’s president.

After Bernard Madoff was arrested in December 2008, Wilpon, Katz and their associates claimed they had lost $178 million to his Ponzi scheme, perhaps the biggest Jewish communal affinity fraud in American history. Irving Picard, the lawyer charged with unwinding the Madoff fraud, disagreed.

“There are thousands of victims of Madoff’s massive Ponzi scheme,” Picard wrote. “But Saul Katz is not one of them. Neither is Fred Wilpon.”

It was a bad time for the Mets. Ticket sales went soft. Wilpon sold off part of the ball club. The team could no longer sign expensive players. In 2009, the Mets had the second-highest payroll in the major league. By 2014, 20 of the league’s 30 teams paid their players more.

Bernard Madoff has been out of circulation for the past six years, sitting in a federal prison in North Carolina, chipping away at his century-and-a-half sentence. Yet the Madoff phenomenon writ large, the nightmare apparatus that Bernie set in motion — the Ponzi scheme and feeder funds, the clawbacks and the lawsuits — still stalks hallways of the institutions and homes that got sucked into its vortex.

The second-to-last week of October was a bad one for that Madoff phantom, and a good week for the proverbial Ghostbusters. It started October 20 with a court filing.

In papers filed that day, Picard requested permission from the court to release another $1.5 billion in recovered funds to Madoff’s victims. That distribution would bring the total amount returned to more than $9 billion of the $14 billion in approved claims. According to Picard, once that money is distributed, every single Madoff account with a net equity of up to $1.1 million will have been made whole. Everyone else whose claims are recognized will have been repaid almost 57%.

Given that Picard’s math only credits investors for money they actually invested in their Madoff accounts, there’s still a lot of pain for Madoff’s victims — particularly for small investors who made withdrawals of what they thought were legitimate returns, and have now had those withdrawals subtracted from the amount they can recover. Still, half back for big investors and a full recovery of their initial investment for smaller investors isn’t bad, given the scale of the Madoff catastrophe.

“That is much more than anyone could have expected at the start of the case in 2008,” said Stephen P. Harbeck, president and CEO of the Securities Investor Protection Corporation, the body responsible for overseeing the Madoff liquidation, in a statement.

Sure, that’s the executive responsible for the payouts praising the payouts. But think back to how we talked about Madoff in December 2008, in the days after the fraud was disclosed. The fraud had “gone off like an atomic blast,” one reporter wrote in this paper.

Maybe a small atomic blast. More than a thousand accounts have been repaid all of the money handed over to the Ponzi schemer. And in the area around a small green diamond in Flushing, Queens, the radioactive cloud is dissipating fast.

The Mets have always been losers. Legendarily awful in their early years, the team has refused to let a couple of World Series trophies in 1969 and 1986 and a National League pennant in 2000 affect their sense of history. Still, in the mid-2000s, the team did seem ready to try out winning for a bit. Buoyed by a massive payroll, the Mets made it to the last out of the last inning of the last game of the 2006 National League Championship Series before Carlos Beltran watched the last pitch go by with the bases loaded.

The disaster at the end of the subsequent season, when the Mets crumpled and threw away a commanding division lead, didn’t have anything to do with Madoff. Neither did the team’s failure to qualify for the playoffs in 2008. Much of what happened afterward, however, had everything to do with the man who some investors liked to call Uncle Bernie.

The role of Madoff at the Mets organization, as described in court filings and press reports that began to emerge in 2011, was very much like that of a very rich uncle. The team had 16 accounts with Madoff. Madoff’s season-ticket seats were near those of Katz and Wilpon. Cash flow for day-to-day Mets operations was paid out of Madoff accounts. When the Mets signed big contracts that involved deferred compensation, Madoff held that money.

All told, according to Picard, $90 million of what he termed “other people’s money” was withdrawn from Mets accounts. The total for all accounts tied to the Mets’ owners was alleged to be around $300 million.

“Bernie was part of the business plan for the Mets,” an unnamed former Mets employee told The New York Times in 2011.

In court filings, Picard claimed that the Mets’ owners had been warned multiple times by financial professionals that Madoff’s investment returns were unrealistic. The owners denied those allegations.

The threat of a ruinous financial payout to Picard dissipated in March 2012, when the owners and Picard reached a settlement. Under the terms of the agreement, the owners would relinquish their claims to the $178 million they said they had lost to Madoff, and would pay back up to $162 million, depending on how much Picard was able to recover from other sources. If the latest disbursement is approved, that repayment will be ratcheted down to just $60 million, according to ESPN.

Still, the loss of the Madoff funds, hitting just as bonds for the construction of team’s new stadium were coming due and ticket sales were slumping in the wake of the economic crisis, had already slammed the Mets. The owners sold a $240 million stake in the team the same day the settlement with Picard was filed with the court.

Instead of rebuilding the sort of superstar roster the team had been able to afford — with Madoff’s help — the Mets front office put together a younger, cheaper squad after the season ended in 2008. That squad turned in losing records in each season from 2009 through 2014, making Mets management singularly unpopular in the CitiField bleachers.

Then, in 2015, an odd bit of luck struck the team, as Howard Megdal explained in Politico New York in September. An injury to captain David Wright and the suspension of Jenrry Mejia freed up $10 million, and the Mets went on a buying spree, snapping up, among others, superstar slugger Yoenis Cespedes.

And the team started winning.

A trip to the World Series, which begins on October 27, won’t amount to a full exorcism of the Madoff ghost. Tight budgets make it unlikely that the team will be able to afford to hold on to Cespedes after this season, or even to Daniel Murphy, the Mets journeyman who has been on a home run streak so hot it’s almost monotonous, except it’s not, because holy cow, he’s good.

Still, there’s reason to think that this year’s turnaround may have some staying power. The New York Post reported that the team could expect an extra $45 million in revenue throughout the postseason, helping the Mets turn a profit for the year, and perhaps giving them some cash to throw at Murphy and Cespedes.

Whatever happens next season, this World Series will be an important one in the long history of the Madoff scandal. If the Mets pull it off, expect to hear some unhappy howling from the Madoff ghost during the post-victory Champagne bath, as the lingering specter of Uncle Bernie is thoroughly busted and carted away.