How Rabbi Eric Siroka Made Me Lose My Jewish Identity 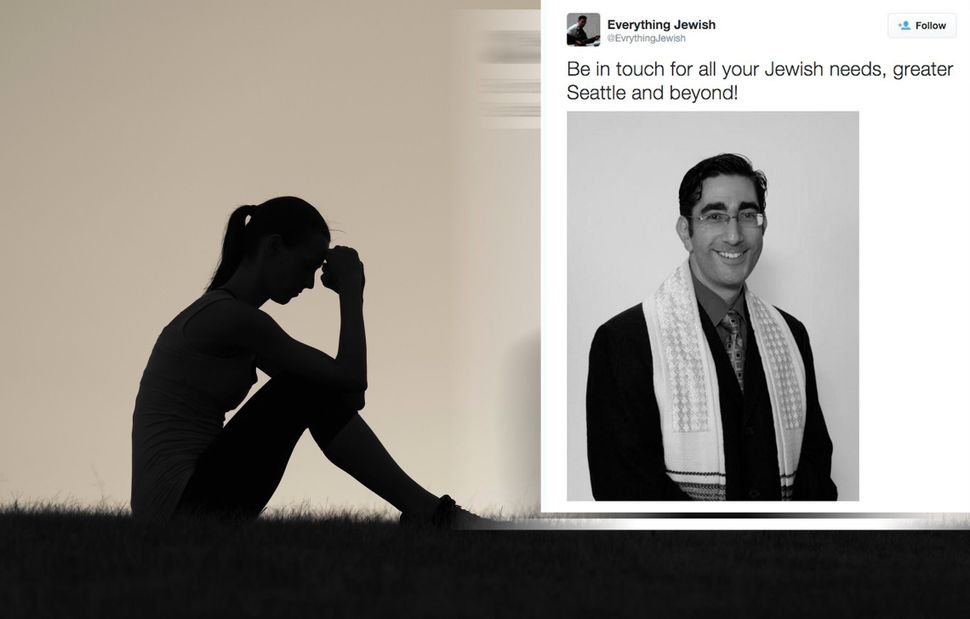 This woman, who wishes to remain anonymous, met Rabbi Eric Siroka at the Reform synagogue Or Chadash, in Flemington, New Jersey, in 2000. She was 17 at the time and was looking for someone to mentor her through a Reform youth fellowship program. Siroka became her teacher, leading her in weekly evening study sessions when they were the only people in the synagogue.

It was following those sessions that the woman says Siroka sometimes forcefully kissed her on the mouth. The Forward corroborated her account with a third party to whom she confided about the kissing at the time. Siroka refused multiple requests for comment. This is an excerpt of her story:

I was a quiet, introverted and serious teen, passionate about all things Jewish. I attended Friday night services when they were held every other Friday night, and served as the president of my synagogue’s tiny youth group. I started attending the Union for Reform Judaism’s Kutz Camp at 14, where I would spend the next seven out of eight summers.

In my junior year of high school I sat on the committee to hire Siroka as our first full-time pulpit rabbi. Two months later I left for a semester in Israel. I was, in essence, an exemplar of my movement, interested in Torah, Talmud, prayer, tradition — anything with a Jewish twist. My hope was to be a Reform rabbi when I grew up.

The first time he kissed me was after Friday night services while I was sitting on a desk in the empty front office. He held my head tightly between his two strong, over-large hands and landed a long kiss right on my lips. I couldn’t move my head out of his grip or respond. I was 17 years old. I did not know what to do.

Our study sessions consisted of him commenting on the way I dressed, encouraging me to end my relationship with my non-Jewish boyfriend, telling me how amazing I was, how attractive I looked, how it was silly for me to be so interested in study, how much of life I had ahead of me, and how much he liked me and enjoyed our time together.

As months and years went by, I slowly stripped away my once beloved and passionate Jewish identity. I stopped teaching Hebrew school and going to services. I stopped getting butterflies in my stomach when I thought of Israel. When I would see people practicing, observing or even taking off work for the High Holidays, I would be disgusted, get anxiety and start to panic. The last to be stripped was my relationship to Israeli dancing, my body slowly stilling at the sound of one of those wonderfully familiar tunes.

Rabbi — I hold you primarily responsible for the dissolution of my hard-earned and deeply meaningful spiritual and Jewish identity.

How Rabbi Eric Siroka Made Me Lose My Jewish Identity