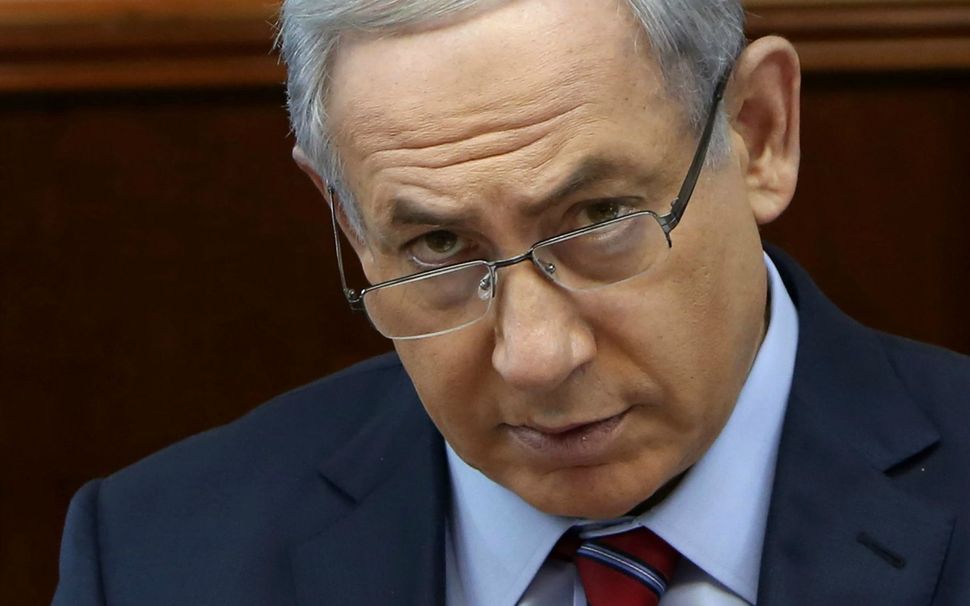 Israeli Prime Minister Benjamin Netanyahu’s upcoming speech at a liberal Washington think tank is provoking outrage from some progressives who say that the appearance gives a bipartisan sheen to his government’s right-wing policies.

The Israeli leader’s scheduled November 10 appearance at the Center for American Progress, a Democratic left-leaning institution, is seen as an attempt by the Israeli leader to reach out to a liberal audience. Many have been alienated by recent events like Israel’s 2014 military campaign in Gaza, which involved high Palestinian civilian casualties and hundreds of thousands left displaced or homeless.

“CAP is not just a think tank, it is also the standard bearer for progressive policies,” said Matt Duss, a former policy analyst at CAP who now heads the Foundation for Middle East Peace. “Netanyahu is trying to re-establish some kind of bipartisan credibility. I can understand what he has to gain from it, but what will CAP gain?”

In an interview with the Forward, CAP’s president, Neera Tanden, strongly defended her group’s decision to host the Israeli leader. “I don’t think Israel is a lost cause for progressives,” she said. “I’m a progressive and I believe in change, and that things change for the better.” Tanden rejected the notion that CAP should have turned Netanyahu away, saying that the institute “is a think tank that is dedicated to free exchange of ideas.”

The debate over Netanyahu’s speech is yet another iteration of the debate over Israel within Democratic ranks. Democratic elected officials and party elites—many of them tied to pro-Israel donors—remain strongly supportive of Israel. They hope to improve relations with its government in the aftermath of Netanyahu’s falling out with President Obama.

But according to polls many younger grassroots Democrats do not share the basic pro-Israel sentiment and at times feel the need to distance themselves from Israeli policies. In a February Gallup poll, only 48% of Democrats said they sympathized more with Israelis than Palestinians in their long running Mideast conflict, compared to 83% of Republicans who favored Israel more.

The party’s increasingly influential progressive wing is highly critical of Israel’s 48-year occupation of the West Bank and isolation of Gaza. Many seriously doubt Netanyahu’s commitment to fostering the establishment of a Palestinian state or establishing a political process to move toward ending Israel’s control of the occupied territories and their Palestinian population. His public call to supporters on election day last March to get out and vote for him because “Arab voters are coming out in droves” provoked reproof from a wide swath of liberals, including from Obama. Netanyahu apologized for the comment after his victory.

The initiative to have Netanyahu speak at the bastion of liberal policy in Washington came from the prime minister’s office and the Israeli embassy in Washington. Observers view it as both an effort to balance his appearance at the conservative American Enterprise Institute a day earlier, and as a way to reach out to Democrats and begin a reconciliation process.

Netanyahu is expected to land in Washington Sunday night and to meet Monday morning with Obama in the Oval Office. It will be the first meeting between the two leaders since emotions spiked over the Israeli prime minister’s decision to address the U.S. Congress directly in March through an agreement with the Republican Speaker of the House, John Boehner, without consulting with or informing the White House.

CAP, after an internal discussion, decided in favor of hosting Netanyahu for a discussion in front of 100 invited guests. But outside the think tank, the decision stirred uproar.

In the Nation magazine, Ali Gharib, who worked in the past for Think Progress, CAP’s news blog, argued that Netanyahu’s close alignment with the Republican Party and his policies regarding Israel’s conflict with the Palestinians “justify denying Netanyahu’s request to speak at a liberal institution.”

Activists at MoveOn.org launched a petition demanding CAP open the meeting with Netanyahu to “to interested journalists and members of the public.” Tanden, in response to this request, said that the event will be streamed in full and open for all to watch online.

But a set of leaked internal CAP emails published Thursday by journalist Glenn Greenwald on The Intercept website shed light on CAP’s apparent responsiveness to past pressure from AIPAC.

In one February 2012 email, CAP’s chief of staff, Ken Gude describes a meeting he held with Jeff Colman, a top AIPAC official, after some Jewish groups had excoriated CAP for comments critical of Israel that had appeared on its on-line blog, ThinkProgress. CAP took measures to remove the comments and, in a Washington Post article, publicly criticized the staffers who had posted them. “He felt we are moving in the right direction,” Gude reported of his conversation with Colman in the email. “I got the very clear impression they want to move forward.” Noting a CAP writer who was due to appear on a panel at AIPAC’s upcoming confernce, Gude enthused, “I bet we get a lot of invitations to attend it. And it’s very likely I’m going to Israel on one of their upcoming trips.”

In another email, from January 2012, Tanden reports on a phone call she received from Ann Lewis, a close confidante of Hillary Clinton, the former secretary of state and current presidential candidate, in which Lewis complains that CAP’s on-line blog “seems anti-Israel.”

“She basically said we’re going to continue to have a problem until our blog seems like it’s not anti-Israel,” Tanden wrote. “I tried to discuss Israel v.the Israeli gov’t policies. But she for one was not really buying it.”

CAP’s policy toward Israel came under fire in 2012 due to blog posts and tweets by CAP bloggers that accused AIPAC of pushing for war against Iran. One referred to a pro-Israel lawmaker as a representative of the lobby. CAP moved quickly to remove the comments and many of the staffers involved in writing about the Middle East, including Duss and Gharib, are no longer with the think tank.

Meanwhile, two organizations, the U.S. Campaign to End the Israeli Occupation and Jewish Voice for Peace, have called on their supporters to picket outside the upcoming event, “encouraging employees of this progressive policy institute not to attend Netanyahu’s speech.”

Tanden, who will be interviewing Netanyahu on stage before giving the microphone to members of the audience to pose questions, promises a vigorous debate with the Israeli leader. “There are significant issues we are in dispute with the prime minister and we will engage in a process of question and answer.”

In preparation for the discussion, Tanden, a former domestic policy adviser to Hillary Clinton’s presidential campaign and former aide to Obama, has been consulting with activists and experts about her imminent interview with Netanyahu.

After deciding to host Netanyahu, CAP also consulted with J Street, its natural ally in the pro-Israel camp. J Street, said Jessica Rosenblum, the group’s vice president of communications, was fully supportive of the event. She noted, however, that “the onus is on Netanyahu” to prove that he is sincere in his outreach to liberal Democrats.

Noting a secretly taped 2001 meeting between Netanyahu and West Bank settlers who were complaining about pressure from abroad on Israel to compromise, Beinart cited Netanyahu’s reassurance to them that “I know what America is. America is a thing you can move very easily, move it in the right direction. They won’t get in the way.” He suggested asking the Israeli leader: “What exactly did you mean by that?”

Beinart also proposed questioning Netanyahu about statements in his book A Durable Peace, in which Netanyahu calls Israeli control of the West Bank “a liberal policy aimed at radically improving the lives of the Arabs.” Noting statements by numerous retired leaders of Israel’s security services on the oppressive nature of Israel’s rule over the Palestinians in the 2012 documentary film, “The Gatekeepers,” Beinart suggested asking Netanyahu: “Why is your view of Israeli policy in the West Bank so much more benign than the men who administered it on the ground?”

CAP was founded in 2003 by John Podesta, a former Chief of Staff to President Bill Clinton and advisor to Obama who now chairs Hillary Clinton’s presidential campaign. It was set up as a counterweight to conservative think tanks in Washington and to establish the promote foundation for progressive Democrats while out of power.

A former staff member told the Forward that CAP was making a “very safe political calculation” and toning down its criticism of Israeli policies. But Tanden argued that CAP is just as active on Israel-issues as in the past, pointing to the group’s advocacy in support of the nuclear deal with Iran, which Netanyahu’s government opposed.