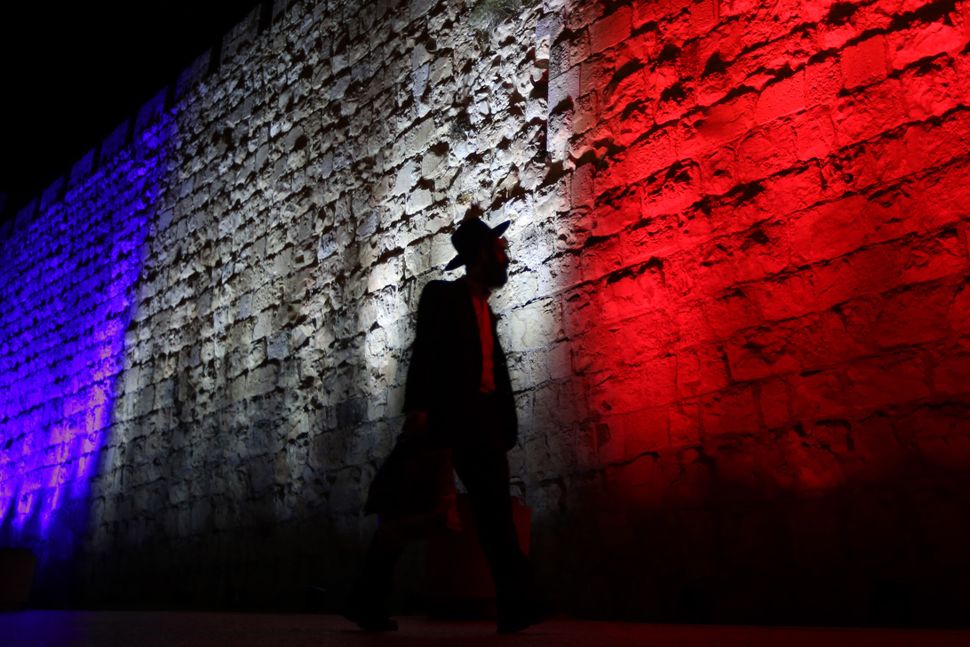 In the days after Islamic State terrorists attacked Paris, killing 129, Israeli officials had a message for the people of France: We feel your pain.

The Paris attacks came on the heels of a bloody six weeks in Israel and the Palestinian Territories, in which 14 Israelis and more than 70 Palestinians have been killed. On the day of the Paris assault, two Israelis were shot by a Palestinian attacker near the Otniel settlement in the Israeli-occupied West Bank.

In a statement announcing that Israeli security had apprehended the West Bank killer, Israeli Prime Minister Benjamin Netanyahu made no secret of his message tying the bloodshed in Israel and France.

“The terrorists who attack us have the same murderous intent as those in Paris,” he said.

He was echoed the next day by Jerusalem mayor Nir Barkat in an op-ed in the Times of Israel. “Terrorism in Paris, Jerusalem and around the globe is fueled by the same murderous hatred and extremist ideology that aims to abolish our civilization and our values,” he wrote. 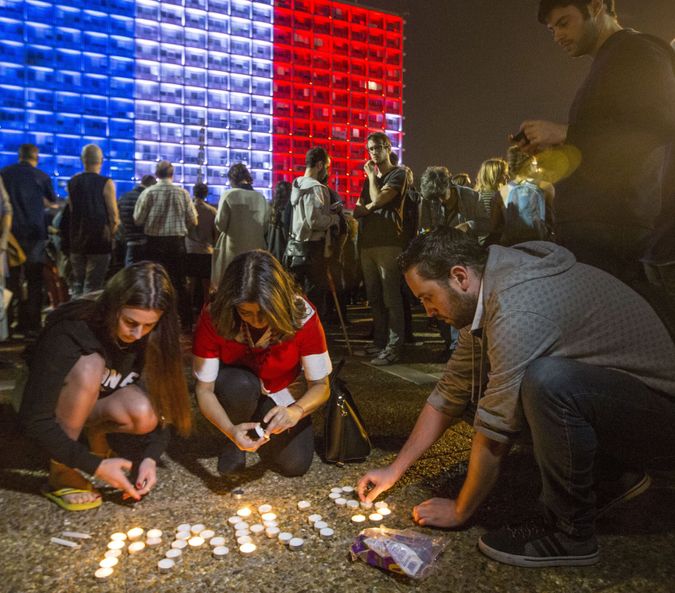 But it is far from clear that opinion makers in Europe see things the same way.

In the days after the Paris attack, Sweden’s foreign minister said frustration at the Israeli-Palestinian conflict is fueling extremism that leads to terror.

“To counteract the radicalization, we must return to the situation such as the one in the Middle East, in which, not at the least the Palestinians, see that there is no future,” foreign minister Margot Wallström said.

On November, 14—one day after the Paris attacks—Agence France-Presse, the country’s government chartered news agency, published a chronology of major terrorism attacks around the world since the September 11, 2001 attacks by Al Qaeda on the Pentagon and New York’s World Trade Center.

No terrorism attacks on Israel were included.

Terming the exclusion “no surprise,” Arutz Sheva, the right-wing nationalist Israeli news service based in the West Bank settlement of Bet El, complained, “Western media has long attempted to marginalize and in certain cases justify the constant lethal attacks against Israeli civilians and security personnel by a range of terrorist organizations including Hamas, Fatah, Islamic Jihad, Hezbollah and others.”

It’s a longstanding complaint. By pinning together events a continent apart, Israeli leaders are drawing sweeping conclusions about the nature of their country’s decades-long dispute with the Palestinians. In their portrayal, the Israeli-Palestinian conflict is not a territorial disagreement or a conflict over occupation with religious hues, but a fight of the West, of which Israel is a part, against radical Islam, which seeks to destroy its freedom. In this view, the Paris attacks are an opportunity to explain to Europeans what Israelis endure.

“Now the French are attacked, Europe is attacked and they understand that they have to take measures in order to protect their citizens,” said Tsilla Hershco, a researcher at the Begin-Sadat Center for Strategic Studies, a right-leaning Israeli think tank. 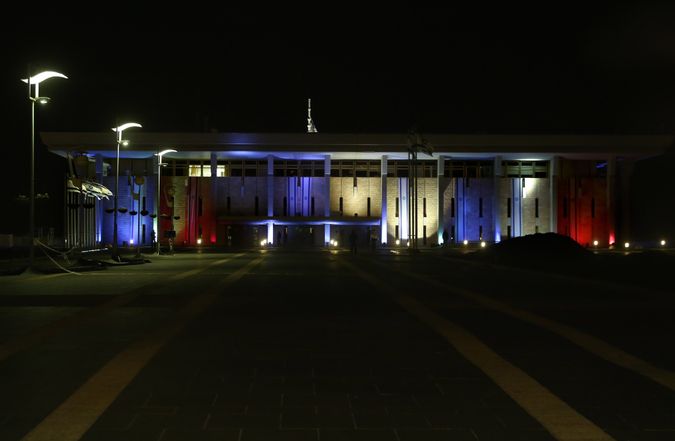 If Europeans understand Israel better, the logic goes, then perhaps they will take a softer tack with the Jewish state. In a rebuke to the Israeli settlement program, the European Union recently issued guidelines to label settlement products sold in member states. Less than a year earlier, the European Parliament adopted a resolution recognizing Palestinian statehood in principle. Now, Israeli leaders are hoping the Paris attacks will lead Europeans to set aside their disagreements with Israel.

“I notice a common theme in Israeli media, which is now the Europeans and others will understand us better and we will be less attacked [by Europe] because of what we are doing with the Palestinians,” said Shlomo Brom, a senior research fellow with the Institute for National Security Studies and retired army general.

It’s a theme not limited to Israelis. Speaking to an Orthodox audience in New York two days after the Paris attacks, Senator Chuck Schumer, the New York Democrat, declared, “Israel and the Jewish people have been subject to the same type of terrorism since the 70s. And for so long, when it just happened to Israel, the world condoned it…. And, because the world did not rise up, this terrorism, like a cancer, has spread throughout the world.”

The brutal Paris attacks were not the first time that Israel has used terrorist incidents abroad to explain its policies toward the Palestinians at home. According to Brom, Israeli leaders made similar cases after the September 11th attacks in New York and Washington, the 2004 Madrid train bombings and the 2005 bombings on the London underground, all by Al Qaeda or the jihadist group’s affiliates.

But so far, Israelis have failed to sway Europeans, said Brom. Broadly speaking, Europeans sympathize with Israel in the face of terror attacks, but they also hold Israel at least partially culpable for the violence.

They think that “Israelis are not doing what needs to be done [to stop] terror attacks” because Israel is “adamant in keeping the occupied territories under its control,” said Brom.

Given this, Israeli leaders’ bid to sway European public opinion after the Paris attacks will fall flat, he predicted. “I’m afraid this is not what is going to happen.”

Yossi Kupperwasser, a senior project manager at the conservative Jerusalem Center for Public Affairs, disagrees that Israeli leaders spoke out on terror in Paris to make Israel’s case in Europe.

“When Israel speaks about terror, it is from our solidarity with the West, not because we are seeking Western solidarity with us,” he said. “When something happens to our brothers in the West, we are worried and we want to help them.”

As Israel draws comparisons between the incidents, it is also painting its antagonists at home with the same brush as jihadist terror groups in other parts of the Middle East. In a 2014 speech at the United Nations, Netanyahu said that ISIS and Hamas are “branches of the same poisonous tree.” Netanyahu’s speech occurred shortly after Israel’s latest war with Hamas in 2014, which claimed 72 Israelis, mostly soldiers, and 2,100 Palestinians, mostly civilians. Netanyahu criticized UN members who praised American attacks against ISIS in Syria and Iraq while condemning the Israeli campaign against Hamas in Gaza, saying that ISIS and Hamas are cut from the same cloth.

Hamas, does, in fact, oppose not just Israel’s occupation of the West Bank and isolation of Gaza; it rejects Israel’s legitimacy as a state, though it also says it would agree to a long-term truce with Israel under the right conditions. At the same time, unlike Al Qaeda and now, ISIS, Hamas does not conduct attacks on territories outside of Israel and the occupied territories as a matter of policy. Moreover, Hamas has been engaged for several years in an internal battle of its own against Salafists — Muslim fundamentalists who seek to emulate the lives of the prophet Mohammed and his companions — some of whom are said to sympathize with the Islamic State.

Yaron Ezrachi, a professor emeritus of political science at The Hebrew University of Jerusalem, said that Netanyahu’s statements linking Hamas to the Islamic State reflect an Israeli worldview that pits irrational Arab actors against the rational West. In this perspective, “Israel is a pioneer in effective struggle against fanatic Islam,” he said.

But other Israelis, including members of the state’s security establishment, see Israeli policy as a significant driver of Palestinian violence.

“Some of the motivation of the Palestinians to carry out terror attacks is due to the violence of right-wing elements in the West Bank,” the director of the IDF operations directorate, Maj. Gen. Nitzan Alon, said in court testimony at a trial in October about incitement from a Jewish right-wing website. Alon testified as the former commander of the Judea and Samaria Division and the head of Central Command.

Another Israeli general, Guy Goldstein, deputy coordinator of government activities in the territories, told a conference in October that the current spasm of violence in Israel and the occupied territories was “a rebellion of individuals…that comes from pain and frustration.”

“According to this view the violence in Israel is stemming almost squarely from the occupation, from the humiliation of the Palestinians, for their repression and their displacement for the radical discrimination of Israeli Arabs, which also deprives Arab youth of an economic future,” said Ezrachi.

Ezrachi added that Israel has used the attacks in Paris as a pretext to implement controversial policies at home. Just five days after the Paris assault, Israel announced that it had outlawed the northern branch of the Islamic movement in Israel, citing its “mendacious campaign of incitement” that Israel was threatening the Al Aqsa mosque in Jerusalem.

The mosque is part of the Holy Esplanade, sacred to Jews and Muslims. In recent years, Israeli leaders have been making provocative visits to the Jordanian-controlled site, stoking Arab fears that Israel intends to upend the site’s so-called “status quo,” under which the site is administered by a Muslim foundation under the auspices of Jordan. Muslim preachers in Israel and the Palestinian Territories have capitalized on the fears, calling on Muslims to protect the site. Israeli security analysts say that fears about Al Aqsa have motivated, in part, the recent spate of Palestinian attacks against Israelis.

In Ezrachi’s view, Israel is taking advantage of the mood in Europe to eschew criticism for its policy against the northern Islamic movement.

“The interesting thing about this is that it is definitely an exploitation of the anti-Arab atmosphere in Europe,” said Ezrachi.