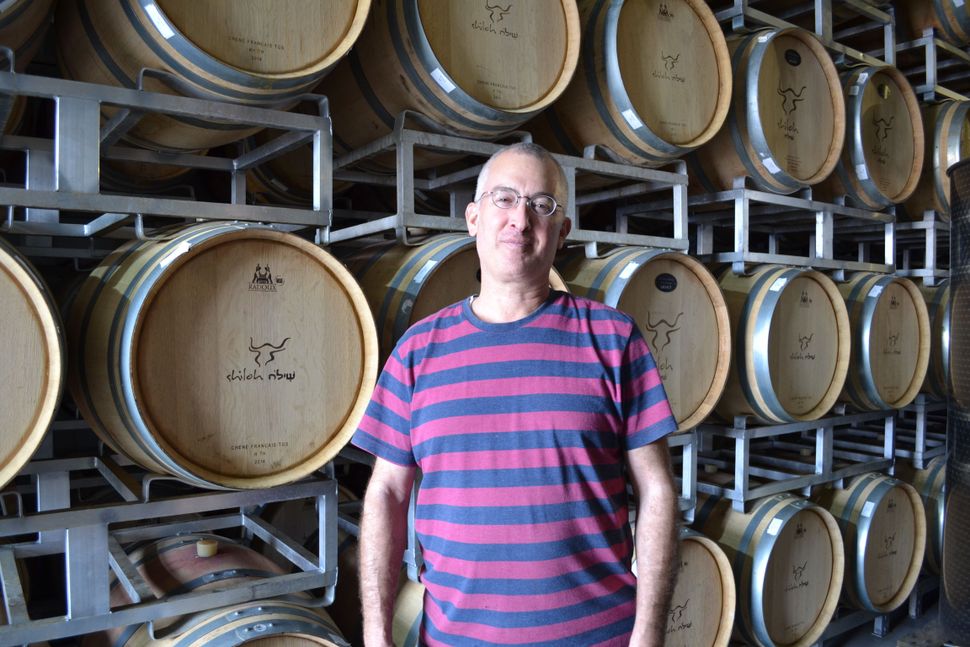 Heard It Through the Grapevine: Amichai Lourie wants the world to know the grapes for his wine come from Shiloh, explaining, ‘We are here because we believe we are supposed to be here.’ Image by Naomi Zeveloff

Sitting in the warehouse of his winery in the Israeli- occupied West Bank, Amichai Lourie picked up a bottle of 2012 Cabernet Sauvignon and pointed to a label where the name of his settlement, “Shiloh,” was scrawled in white ink.

The European Union has said that it will label goods from exclusively Jewish West Bank settlements, which the world community views as violators of international law. But Lourie said he has nothing to hide.

“I don’t need someone to tell me to mark the wine,” he said. “I’m marking it voluntarily.”

In fact, interviews with settler wine makers indicate they are ready to combat the E.U. decision by aggressively marketing their kosher wines and other products. They are highlighting, rather than hiding, the fact that they come from “Judea and Samaria,” biblical parlance for the West Bank.

The E.U.’s new guidelines, announced November 11, call on the union’s 28 member countries to label products from the Israeli West Bank settlements with the phrase “made in settlements.” The policy is billed as a technical move that aims merely to clarify their place of origin. But it is also understood widely as an effort to exert pressure on Israel’s settlement enterprise amid growing frustration in Europe over the stagnant Israeli-Palestinian peace process. In addition to wine, the E.U.-mandated label will be on fruits and vegetables, olive oil, honey, eggs, poultry and cosmetics.

The designation will affect less than 1% of Israeli exports to the 28 member nations. But Israeli economists say that the decision could have broader consequences if European stores opt to stop bringing in Israeli goods to avoid the hassle of labeling items. Israeli politicians also warn that the new guidelines open the door to boycotts of Israeli goods.

Israeli Prime Minister Benjamin Netanyahu called it an “immoral decision.” “The labeling of products of the Jewish state by the European Union brings back dark memories,” he said in a statement, an apparent allusion to Nazi Germany. Israel is now mulling bringing suit against the E.U. with the World Trade Organization over the measure.

Israel’s wine industry is still relatively new, said Itay Gleitman, the wine critic for Haaretz. For the past 30 years it has been dominated by the Golan Heights. Israel captured the territory on its northern border from Syria in 1967 and later annexed it. The international community considers the Golan to be occupied territory, too, and products from there will also be labeled under the E.U.’s guidelines.

But recently, West Bank wines have been on the rise. Over the past 15 years, Gleitman estimates that 30 wineries have sprung up in settlements throughout the occupied territory. The industry’s rapid growth relies, at least in part, on settlers taking over private Palestinian land, according to a 2013 report by Keren Navot, an organization examining West Bank land issues. Between 1997 and 2012, over a thousand acres of vineyards were planted by West Bank settlers. More than half of that land had been privately owned by Palestinians, the report said.

Grown at high altitudes, the West Bank grapes are exposed to cool temperatures at night and to warm temperatures during the day, priming them for winemaking. “Recently [settlers] have become more and more serious about winemaking,” he said, noting that settlement wines have won accolades in Israeli and international wine competitions.

“In wine, everything is where the winery is located,” said Yaakov Berg, owner of the Psagot Winery, a West Bank operation tucked in the rocky brown hills north of Jerusalem. “We believe that the main part of the quality of our product is because of where we are located.”

The location of the wineries is also important for another reason. As ideological settlers, the wine makers believe they are fulfilling a Jewish promise to settle the land. They say they are making wine in the places where their long-ago Jewish ancestors made it, reviving a tradition that has been dormant in the area for 2,000 years. Unlike other industries in the West Bank, wineries employ few Palestinian workers. According to religious Jewish legal standards, only traditionally observant Jews can make kosher wine.

“From day one, the owner and the winery and I said we are here because we believe we are supposed to be here,” Lourie said. Mayer Chomer, a Mexican Jewish entrepreneur is the owner of Shiloh.

Nadim Khoury, founder of the Palestinian Taybeh Brewing Company, said it’s not true that the settlers brought wine back to the West Bank. Khoury said that his forebears brewed homemade wine in Taybeh, a Palestinian Christian town north of Ramallah, to keep warm on cool winter nights. In 2013 his company began offering a line of wines called Nadim, now available in Jerusalem hotels and in Copenhagen.

Under the E.U. guidelines, Khoury’s products in Europe will be labeled either “product of Palestine” or “product of West Bank (Palestinian product).”

He said that though the E.U. labeling should have been done “a long time ago,” he is focusing on his product instead of on politics: “Instead of ‘Boycott Israel,’ we say, ‘Drink Palestine.’”

Gleitman predicted that the E.U. decision would not affect West Bank and Golan wine sales. The average European consumer is likely not interested in Israeli wines with an array of inexpensive options from established wine cultures at their fingertips. On the other hand, Jewish consumers of kosher Israeli wines might be more motivated to purchase from the occupied areas.

“When they hear about this stuff, they will buy more and more and encourage and help these wineries to thrive and not let them be affected by this decision,” he said.

Yigal Dilmoni, the deputy CEO of the Yesha Council, the settler governing body, said that most West Bank growers and manufacturers are not worried about the new guidelines since they do robust business in Israel, the United States, Canada and Russia.

But some settlers voiced concerns.

“The moment that labeling takes effect, orders will definitely drop and that will automatically cause a decline in income,” Menahem Hadad, the owner of a carpentry shop in Kiryat Arba in Hebron told the Israeli daily Yediot Ahronot.

Meanwhile, settlement wine makers are getting a boost from American Christians. Josh Waller, the Tennessee-based founder of HaYovel, brings hundreds of Christians from across the world to the West Bank each year to harvest grapes for wine. Waller believes that the Jewish presence in the West Bank is a biblical prophecy brought to life. His volunteers purchase settlement products on their West Bank trips, and then preach their worth back in the United States and beyond.

“I’m encouraging people to buy products specifically from Judea and Samaria, and from the boycotted areas,” Waller said. “If you are pro-Israel, these are the products you need to buy.”

Berg, meanwhile, is launching a company called “Blessings of Israel” that makes gift boxes full of Israeli food items. Some boxes include flour from Yitzhar, one of the most hard-line settlements, whose residents are thought to be at the center of the “price tag” policies against Palestinians.

A few days after the E.U. ruling, Berg was fielding emails from supporters abroad. A man from Puerto Rico wrote him with an offer to help. “He said, ‘God bless you,’” Berg said.